SOMETHING of a creaky awakening, but an awakening nonetheless, and a phone call to Phillip Island to speak with Joseph and Zebedee and Susan, who are down there over Cup Weekend. So good to hear their voices. It's a long weekend here too: well, at least it's a public holiday tomorrow for Culture Day. Perfect illustration of the difference between two countries? Or unfortunate coincidence? Please, you decide.

Kate, Mitsuru, Patrick, Cathy and I wandered down to Miraikan one last time to hear/be part of an event for the Science Agora. A 'science cafe' discussion on the use of popular culture in museums. The talk was by mycologist Doctor Tsuyoshi Hosoya from the National Museum of Nature and Science (nee The Natural Museum of Science) and was called 'Inside talk about Wonders of Fungi: a mycohistorical special exhibition featuring Japanese pop culture MANGA' 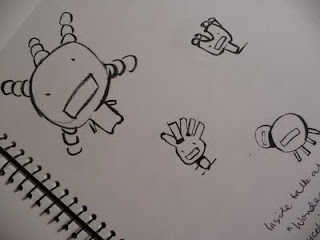 OVER three months from late 2008 to early 2009, his museum presented an exhibition entitled: 'The Wonders of Fungi - mushrooms, molds and their associates'. Yes, my associates: associates. Because the organising principle of the exhibition, the voice of the exhibition, the face of the exhibition was a manga called Moyashimon, by artist Masayuki Ishikawa. The main character in the manga is Sawaki (indeed the series is subtitled 'Tales of Agriculture'), a student at an agriculture lab at a university, who has special (or, as the good doctor described them, 'unnecessary') abilities: he can see, hear and talk to microbes (see above for my versions of the microbial characters). This manga began in 2004, just as Doctor Hosoya was starting to plan the exhibition, and wondering how he'd get people along to look at lichens, molds and fungi. Conicidence? Or an argument for a curationist universe? You decide. 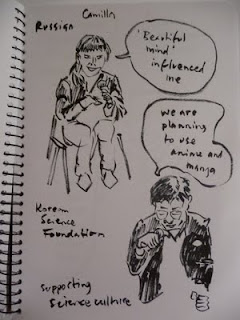 IN the end, his exhibition averaged 2000+ people a day. As he said, "Not too bad for a fungi exhibition." The exhibition design was all of cardboard, and looked great in the film he showed us - the manga artist himself came in and drew little extra surprise pictures of the microbe characters on the walls. 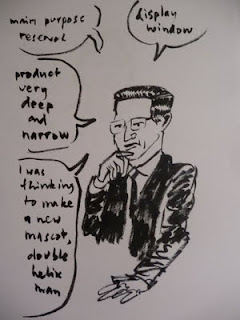 CLEARLY, the exhibition worked for the museum, got the people in, got the message across, worked well. What followed was a discussion about the use of pop culture in general and manga specifically, by a geographically wide ranging group: Russian, Korean (from KOFAC, the 'Korea Foundation for the Advancement of Science and Creativity', I mean, WOW), Chinese, 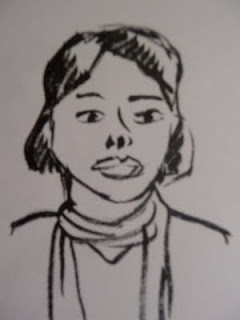 IMELDA from the Phillipines (above), and us. In the end the best point was made by Mitsuru, who's doing his PhD at ANU in, as far as I can tell, the media formation of public perception of science. He highlighted the fact that the success of this fungi exhbition was not due to the fact that manga was used but that a successful manga was used. In fact, before the speech began, he had been telling me that a manga that he read as a teenager, 'Slam Dunk' had spurred a huge interest in basketball. Incredible: comics that actually change mass behaviour! That's like, that's like, popular culture or something... Whereas, most of the comics I know, even 'successful'
western comics occupy more of a niche culture position.
Which is okay by me. 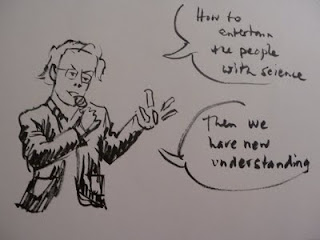 WE made our way back to the vast Grand Pacific Le Daiba, which I'm getting very used to as my home base and will need to leave in a couple of days (no more room laundry, no more buffet breakfasts, no more room cleaning: how will I cope?) for our final lunch to be shared by the Japanese and Australian teams. There was business card-swapping, there were translated conversations, and there were gifts and cards. I got some smoke in my eyes. Which surprised me.
Which surprised me. 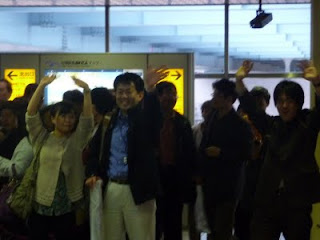 AT Daiba station on the Yurikomome line we said goodbye to lovely Mami, solid Akihiro, and smiling Motozugu.
Hm. 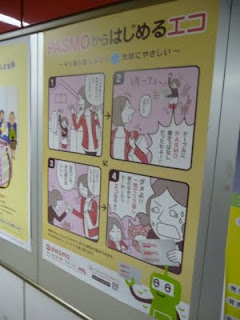 ANYWAY, luckily there were PASMO comics in the train stations to take our minds off things. In the above, a daughter jaunts off without her travel pass. Mother yells at her to come back, she says oh no, I'll just buy one at the station. Mother and cat, apopleptic with rage: "Think of the environment!" 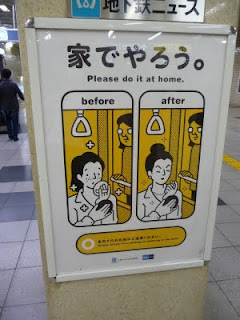 Along with stickers reminding us of the rudeness of talking on your mobile phone on the train (Melburnians please take note) we are reminded that it is also not okay to flash your compact around when the rest of us are trying to TRAVEL. 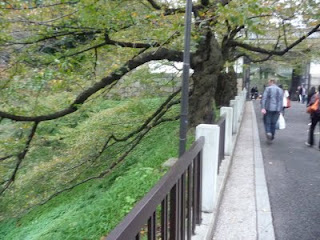 GETTING off at (I think) Takebashi station, we emerged into Another Green World (a little Brian Eno reference there, provoked by me listening to some Music For Airports that I've found on YouTube, which is Not Helping with the old eyes/smoke problem, which is persisting), a cooler and more vegetated Tokyo.
Above: Pete strides underneath the boughs of the cherry trees while the crows caw in Japanese.
We were there to visit the Kagaku Gijitsukan, or 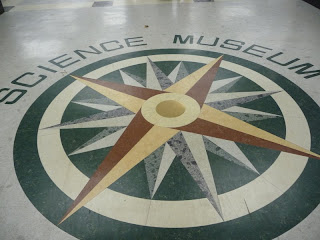 and our friend Madoka-san, who put on a special demo for us about sound and speakers and copper wire and magnets and resonance. The little kid in the cap and his dad took my mind off the departure of my Japanese friends by bringing to the fore how much I was missing my sons. 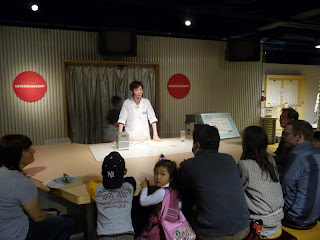 THE museum was a classic hands-on kid's science museum, with some great interactives, but I wandered off to the History of Bicycles exhibit and the 'Electro Hall - Auroral Science', the visual equivalent of Brian Eno. 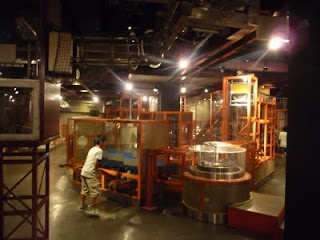 Hiromi found something for me though: a robot dinosaur! 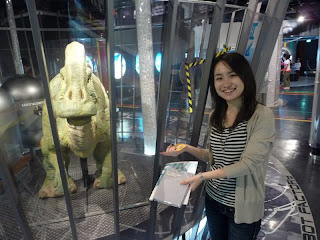 MADOKA-san then led us to Akihabara, (electrical goods and manga), down some alleys and into NaRiKa, a shop full of science toys: 'science is just there'.
Below: nerds in heaven. 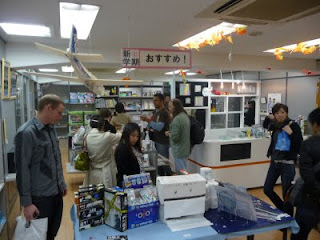 AND on the geek streets of Akihabara. 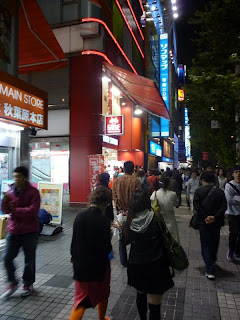 AT Akihabara station we bid farewell to Coco and Megumi - Kate travelled back with them to the hotel, from where they would go home. Hm.
The rest of us jumped into another lift and found ourselves in another upper restaurant, this time eating food off stones. 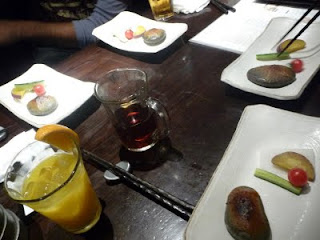 AND looking down onto the street far below. Rain fell. All we needed was some Vangelis and a few spinners and a mumbled voiceover. 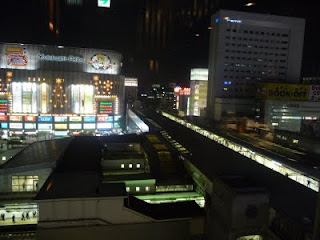 CATHY and I were talking to Hiromi about national cultures - what IS Japanese culture, Hiromi?
"I think... Japanese culture is silent. I think it is the colour of this, of skin, a plain colour."
A remarkable description. A listening culture, that wants to know your mind before talking. Also, one that take its cues from gesture, from the visual. Whereas the Australian culture, perhaps, is one of talking, of garrulity. During this exchange, the Japanese participants became more communicative, and the Australians, more attentive. And that change, that turning of attention to each other, that is surely where the achievement of this program lies. Not in the performance yesterday, which in trying to straddle 'science' and 'performance', got caught in between both. Not that the ideas weren't good - they were - but to deliver them well we would have needed more performance rehearsal time, I think.
No, it was this subtle, enormous shift in both sets of participants that was seismic.
That's what I realised, up there on the 8th floor, up above Geek Town.
And then, back down at the trains, saying sayonara to Nahoko Ando: she and Noriko, both of them from Miraikan, have been such movers and shakers in getting the whole exchange happening and then keeping it going while we have all been here. Three cheers for them!
Posted by Bernard Caleo at 6:28 AM

Now I feel badly about my once-a-year bleach attack on the associates living on my bathroom ceiling.

Dude, I'm getting a lot out of reading your adventures. Very thoughtful reflections on what you've seen! Thanks for telling us.

and you've got me listening to Eno!