Every haiku leaf that falls

Ladies and gentlemen, supper tonight is brought to you by the equally wonderfully named and fonted convenience store of 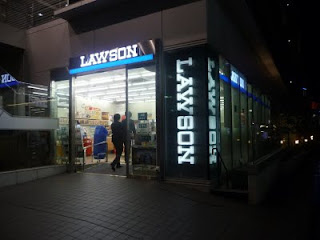 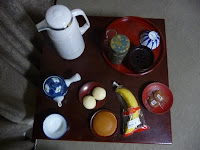 On one of the nights that we were out with Nahoko from Miraikan, she recommended the Edo-Tokyo Museum as a good place to visit. I had already starred it in my pre-Japan Time Out and Lonely Planet guidebook scanning (thanks Torie, Hayden, Luke) and today was the day.

On the way out of the station I saw this poster and thought, oboy. I really hope THAT exhibition is on at the Edo Tokyo. And you know what? 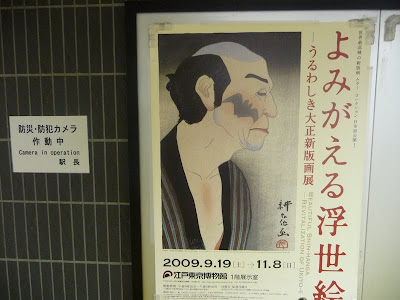 This is the Edo-Tokyo museum. Pretty vast. I stood outside it and thought what people think when they arrive at Melbourne Museum: "Where do I get in?" 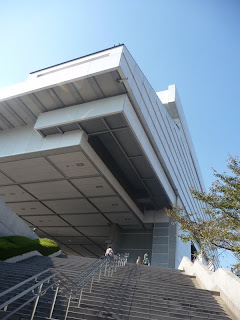 Having located a ticket counter and a lift and F1, I stood outside 'Beautiful Shin-hanga: Revitalisation of Ukiyo-e', took a deep breath and entered. 'Shin-hanga' means 'new print' and this exhibition tells the story of woodblock prints made from the Taisho to the early Showa periods (1915 - 1942) which were created using techniques developed through the Edo (1603 -1868) period.

In the latter Meiji period (1868 -1912), ukiyo-e (or woodblock prints) were being replaced as a means of image-making by photography. The ukiyo-e genre was in decline locally, although it had begun to generate interest overseas. Wanatabe Shozaburo, a dealer in ukiyo-e, was central
to the revival of this method of making images. He commissioned artists to make them, and shin-gawa as a form peaked from 1916-1923, at which time the great Kanto earthquake and subsequent fire puts a dent in things.

Charles W. Bartlett from the USA holds an exhibition of shin-gawa in New York in 1916.

There was beautiful work in there: the Edo-Tokyo link above has a few images, and you weren't allowed to take pictures, which is a good thing, so I took some quick sketches instead.

This head was from work by Sugiura Hisui, whose design sense was excellent. 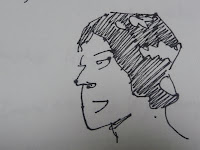 The below is from an incredible image by Kawase Hasui, 'Snow at Zojoji Temple' (1922). 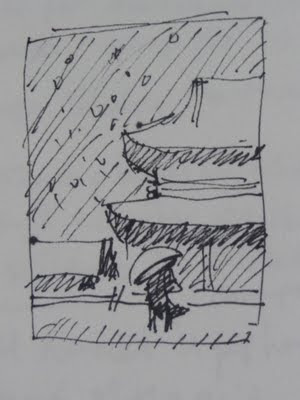 Another North American player in the story was Robert Muller who first sees shin-gawa in 1927 and is gob-smacked but gets his first opportunity to come over here and do some scouting in 1940 when he visits, as the text panel delightfully puts it, "...ostensibly for his honeymoon..." but returns to the US with a huge swag of shin-gawa. Below, the ostensible Mister and Mrs Muller check out some Tokyo art action. (Must have been a pretty interesting time for an American to be doing business in Japan, yes?) 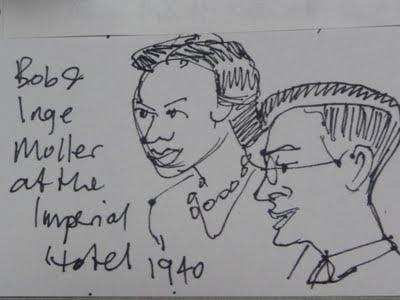 I have to credit the National Gallery of Victoria with whetting my appetite for ukiyo-e: they had a great exhibition a few years ago which seems to linger as an online education program, but with lots of good images, here.


Oh, and the picture on the poster is called ' The actor Onoe Matsuke IV as Konori Yasu in the play Yowa Nasake Ukina no Yokogushi' and it was made by Yamamura Koka in 1917. 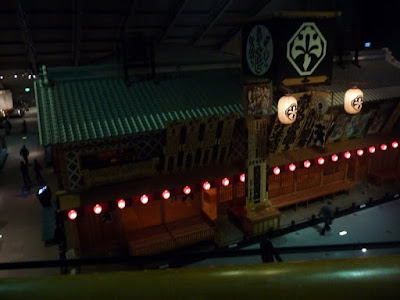 Then it was up to the 6th floor for the permanent exhibition, telling the story of the history of Tokyo. Above is a model of the facade of the Nakamawa-za Kabuki Theatre. Scale: 1/1. This place was an aeroplane hanger. If, like me, you didn't have much of a bead on Tokyo's history, let me give you my now very basic version.


This guy is Tokugawa Ieyasu (1543 - 1616). He builds a stronghold at Edo and establishes a warrior government, or bakufu. There's the shogun, the bushi (samurai), and the chonin (townspeople). 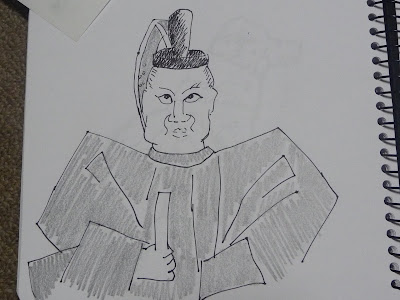 The guy below is the American who sails into Tokyo harbor at some point and says, well lookee here! 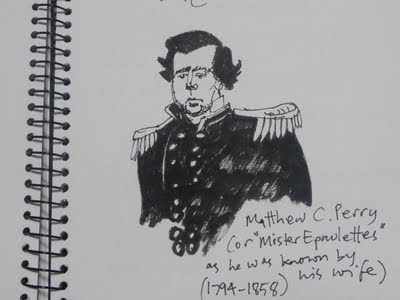 Aw forget all that facts stuff, you know why we're here --- dioramas!

Below, the chonin area around Nihonbashi Bridge, mid 17th century, scale 1/30.
There were even binoculars around the dioramas so you could see all the lttle people and little street dramas and events that were going on. Wow. 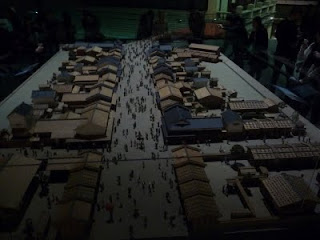 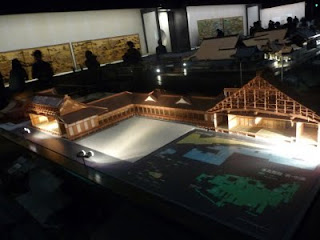 At the bottom of this post (I can't seem to put movies mid-post) you will find a slide show tour of the residence of the daimyo of Echizen-Fukui, Matsudaira Iyo-no-kami Tadamasa (1567 - 1645), which was built in front of the Otemon Castle gate of Edo Castle. A huge complex which in the Meireki Fire of 1657 was razed to the ground.

Below, a picture of the 1/1 scale model of the offices of the newspaper Choya Shinbun, from around the 1870s-1880s. This 'Government and People's Newspaper' was founded in 1874 and was significant for its severe criticisms of the Meiji administration. 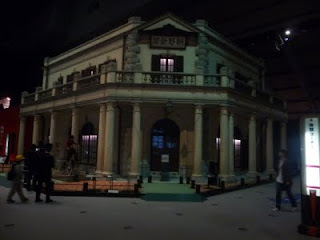 Below, a 1/30 scale model of the same area, the Ginza 'bricktown' from the same time period. The area had been burn to the ground by the Tsukiji fire of 1872. The Meiji government rebuilt, design supplied by British architect Thomas James Waters. I overheard a man explaining to his compainions that the design was an utter failure as the brick buildings became stifling in the Tokyo heat. The area was destroyed again by the Kanto earthquake of 1923. 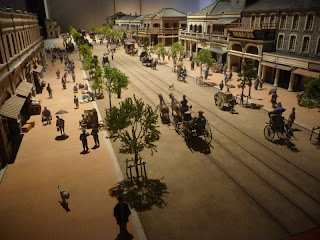 This model, which was under our feet under glass, was amazing. I think it depicts a luxury residence constructed to receive honoured overseas guests. Anyway, every 10 minutes or so, some Strauss would strike up, the roof would slide back, and you could look into the ballroom where a circle of couples were waltzing! 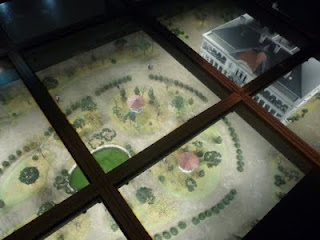 This tower was built in 1890 by the British engineer William K Burton. Called Ryounkaku, or '12 stories', it was the first building in Japan with an elevator, contained shops and lounges and was also destroyed by the 1923 earthquake. 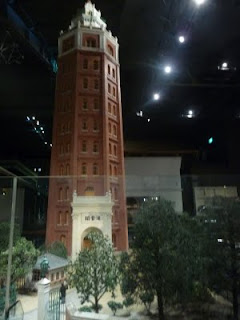 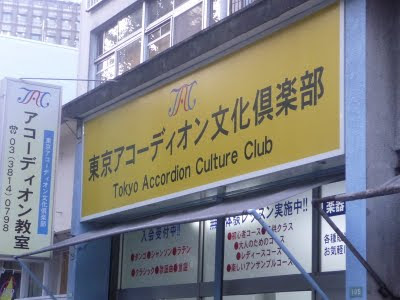 Really? That's NOT what I'm looking for. A bit downhearted, I listlessly walked along a very long wall until I came to somewhere that Moomins might go on holiday.
A beautiful park. 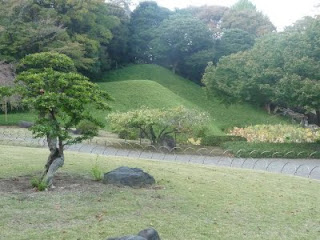 My spirits lifted. I had yearned, and Tokyo had provided. Not what I wanted, but something better. 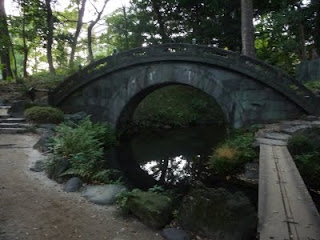 I walked, saw the fish splash in the pond, I sat down. A leaf fell. 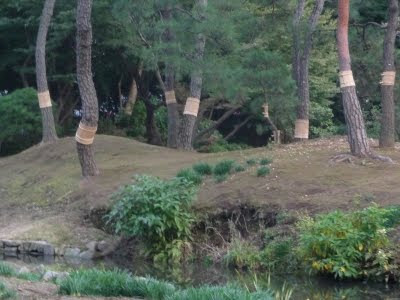 I lef the gardens and pretty soon found the Moomin cafe. Of course. And unsurprisingly, this was on the front table. 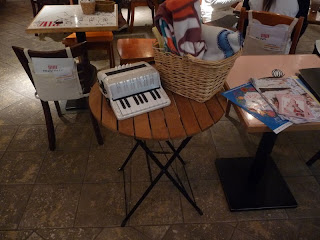 Now I don't think you'll be surprised to hear that the cafe is sort of underwhelming. BUT, there's some good transfers of Tove Jansson's art onto the walls. 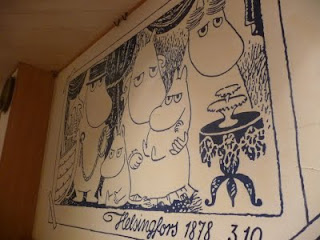 And blow me down if that isn't Moominpapa up there in his boat suspended from the ceiling. 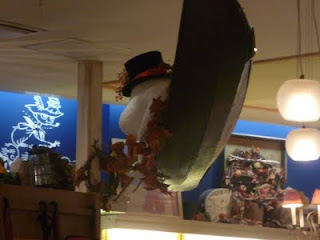 And various members of his extended family sitting around waiting for a drink. 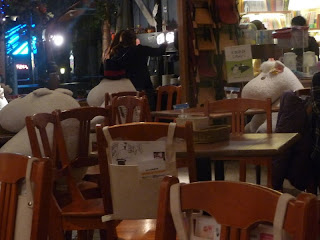 Though I don't know, maybe it's me but they more remind me of creatures from the cantina at Mos Eisley in 'Star Wars'. Not the puppets themselves, but I dunno, it's something about the way they are sitting... their attitude.

And this was a BIG mistake: putting a picture of Snufkin on the piece of plastic that they attach the bill to... a Hemulen perhaps, maybe even the Groke, but Snufkin? Never... 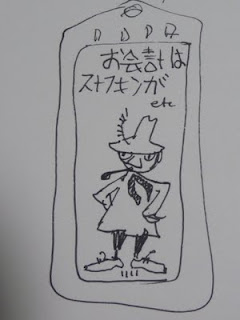 Anyway, I went, I saw, I ate, I paid. I'm pretty sure that somewhere Tove (RIP) is rotating at such speeds she could probably generate enough electricity to power Greater Tokyo, but there you go. 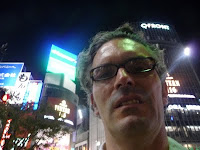 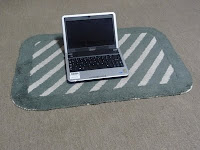 Hm, maybe I should cut down on these long-winded posts.
It's obviously preying on my mind.
Still, If I did live here, I'd be able to get these from LAWSON
every
night. 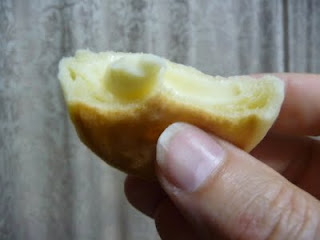 And finally, the diorama slideshow as promised...

Posted by Bernard Caleo at 3:46 AM

Have you become addicted? Not only to Japan, its crazy I-Ching like street navigation and Ukiyo-e BUT to the most delicious thing in the known universe: gyoza? and this is colleen btw, not Sean, who appears to have hijacked my lappy.

I am really enjoying reading these posts from Tokyo.

Yes, the Japanese tend to be a little bit obsessed with Commodore Perry. Here's his guest appearance on Zoku Sayonara Zetsubou. All you need to know is that the teacher is mortally depressed, the short haired girl is super-positive, the brown skinned girl is an illegal immigrant and I'm pretty sure the guy whose real life face keeps appearing is the original manga artist. Also Perry opened up Japan to trade?