Astro, Lafcadio, and me

When my train pulled into Takadanobaba (what a name, eh?) this morning, the 'you've arrived at the station' jingle was very familiar - where DO I know that from? -- of course! It's the theme song to the show featuring Osamu Tezuka's most famous creation, Mighty Atom. Coming down the steps I was greeted by a panoramic frieze featuring the intrepid Astro and other Tezuka creations. Okay, what gives? Did Astro save Takadanobaba in the first episode or something? 'Painted by a grateful public' etc? 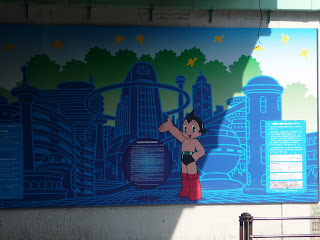 Okay, there's one of my odd pan-and-scanimations of the entire frieze at the bottom of this post, or go to this lovely blog where they have much better pictures, as well as the answer to: 'Why Astro? Why here?' 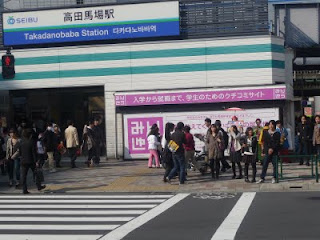 Whiles I was taking my snaps, I heard a GREAT rendition of the Astro theme being played LIVE -drums, sax, maybe even accordion? Whirling around I saw these guys who, while they may have wanted to tell me about god, were great musicians. 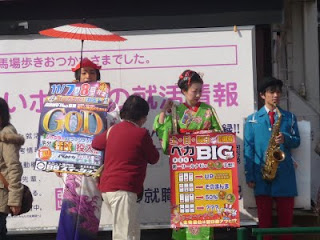 Good costumes too. Anyway, I'd come here to find 'The Blue Parrot', a second hand English language bookshop, and after a false street or so, I did locate it. (It occurred to me for the first time today that actually a compass would be really good in Tokyo, maybe any city but particularly one without street names or street numbers, in order to orient your map at least in the right direction... ah well, next trip)
Waitaminnit -- an English language bookshop? A bit pathetic, surely...? Hear me out, hear me out. It all had to do with my NEXT destination. I had read (thanks Time Out) that in the Zoshigaya (another great name, no?) Cemetary, just up the road, the grave of Lafcadio Hearn could be found, under his Japanese name, Koizumi Yakumo. My remarkable wife Susan had given me, maybe a year ago, a book by Hearn and I'd loved it. And now I was going to visit his remains, but if I could I'd take a book of his with me.
And thanks to The Blue Parrot, indeed I could. 'Lafcadio Hearn's Japan: an anthology of his writings on the country and its people', edited and with an introduction by Donald Ritchie (Tuttle, 1997). Armed with this, the autumn 2005 issue of 'Modern Haiku' and (ahem) Gerard Jones' 'Men of Tomorrow: the true story of the birth of the superheroes' (Heinemann, 2005), off I hiked. 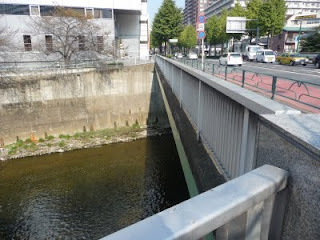 OVER the Kandagawa River. 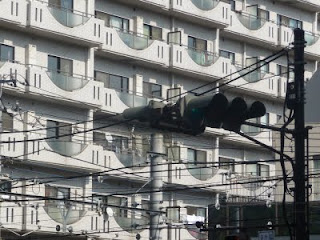 UNDER the traffic lights whose horizontality I love so. 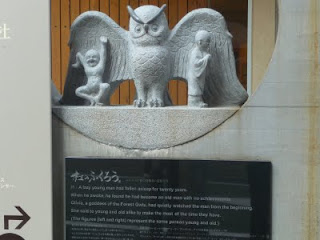 PAST the owl sculpture, through the back streets and finally, into Zoshigawa Cemetary.
Ah.
Tokyo, I would have to say, is very good at hyper-busyness and freneticism.
And also very good at oases.
The orb weaver spiders hung in their webs.
The sun slanted in through the trees on the headstones.
It was cool, and quiet, and calm.
I sat and read my Hearn.
Then went in search of his bones.
I couldn't locate the actual grave, but I did find the row in which it lies.
So I drew that (inked it back at home base this evening). 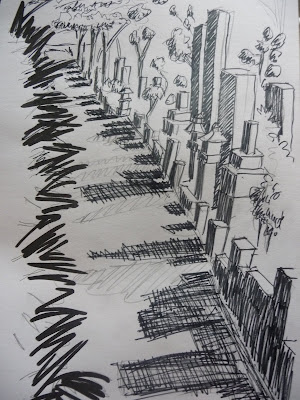 Then launched myself into the mega-shopper Saturday afternoon craziness of Ikebukoro - hoo! Everybody alive here! A train to Harajuku Station, another busy throbbing shopping mecca where I managed to find KIDDYLAND (Joseph, Zebedee: does that sound good?) and was dragging my feet back towards the station, when another 'Oasis this way' sign appeared. I followed it, and found myself in a pair of white slippers and the 'Ukiyoe Ota Memorial Museum of Art' - a perfect follow-up to yesterday's shin-hanga experience. This museum changes over the pieces that they display EVERY MONTH (imagine that, my curatorial friends), and at the moment the show's focus is on plants, flowers and gardening and its place in old Edo town. Sounds so-so: was fantastic. And was a great intro, for me, to the work of Utagawa Hiroshige (1797 - 1858) -- far and above the pick of the artists on display. Every time a piece hit me with design, colour, particularly composition, I'd bet myself it was a Hiroshige and it would be.
There's a selection of Hiroshige ukiyo-e on this site here (seems to be linked to Monash University, sugoi), but please, do come to Harajuku and put on the slippers and see 'em for real.
Below is a sketch (again, 'no photos', hooray!) of an ukiyo from a series called 'Parodies of Watanabe no Tsuna' by Utagawa Kunioshi (1897 - 1861). 'Parody' must be being used in a sense I'm unfamiliar with, here: maybe it means closer to 'version'... anyone? Bueller? 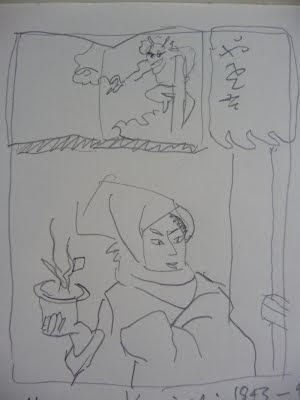 Looks a bit Matisse-y, eh?
My two oasis experiences had brought a line from a previous post into my mind, and tonight I went back and removed a rather weak joke at the tobacco shredder's expense from a couple of days ago (the Tobacco and Salt Museum visit). It's interesting: in Australia I would think such an exhibit/person/representation fair game, but here, the same approach left a bad taste in my mouth, and I feel better now that I've removed it. 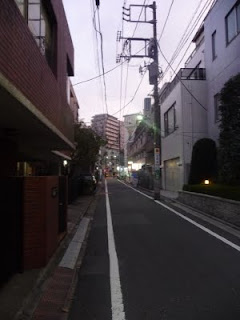 Saturday night in Shibuya. My last night in Tokyo, at least for a while. I feel like I've only scratched the surface of the facet of the dermis of the mantle (of course).
But I think that I'll be back.
Below: the Astro street art
Posted by Bernard Caleo at 2:23 AM