From Odaiba to Shibuya

Woot! It's 8:11pm - my compadres, compatriots and collaborators will be winging their ways over this land where the sun has now set for the day, with weeping in their peepers to be saying goodbye to Old Nihon and hello to the Pacific. All except Kate (or Kate-o, as our Japanese friends sometimes called her, which I loved) who was joined here by her bloke Wayne and they're on their way (well actually probably well there by now) to Kyoto. All except her and me. 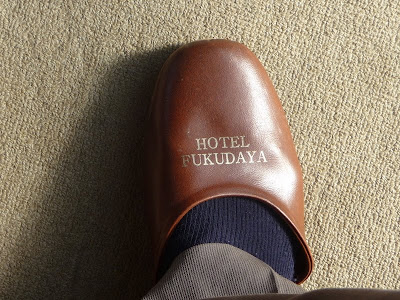 I hadn't been able to admit it but I had been mildly terrified at the thought of facing the JR Metro system on my lonesome. However, luckily I sat next to Wayne at our meal last night and he had such admiration of, and ease with, the Tokyo train system and it must have been contagious 'cause I caught it. (This was just before the restaurant needed to step up the time- honoured Japanese 'gentlemen it's time' system, which is the playing of muzak versions of 'Auld Lang Syne', to actually turning the lights up on us)
So thanks, Wayne: Daiba to Shimbashi - no problem. Shimbashi to Shibuya -- no problem. Perhaps a slight exaggeration, there. A couple of times I looked at the rainbow spaghetti map on the wall of a station and thought, maybe I can sleep here and survive on vending machine food. Which you probably could.
Then I hiked around Shibuya for a while, making the usual mistakes of scale and landmark, until this Shangri-La of a place hove into view: 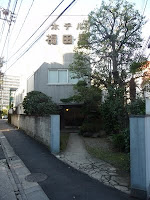 Ah wonderful! And if I buy a car while I'm here I'll be able to park it in the lift-up garage right next door. 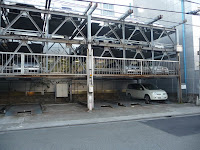 Emboldened by my succcess on the trains, I then started one-stopping: Shibuya to Omotesando on the Ginza line, Omotesando to Nogizaka on the Chiyoda line. Yes! I was on my way to the new National Art Center (sic). I walked past paintings painted directly onto underpass walls: 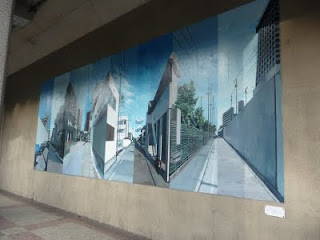 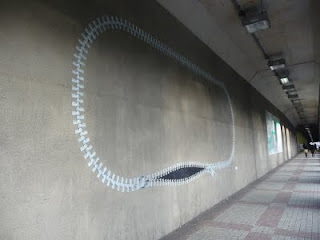 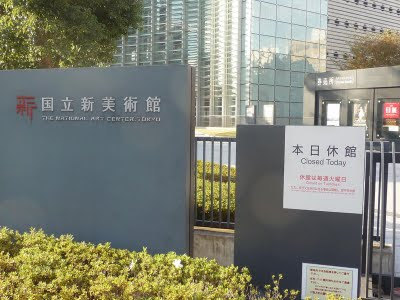 The centre is usually closed on Tuesdays but because yesterday was the holiday, it was open yesterday and closed today. Pity, too. It looked great from the outside... 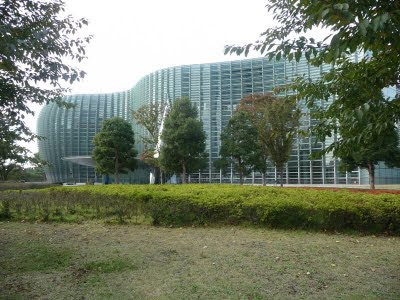 I slipped into the grounds and a glade around the corner caught my eye: seats, trees, sunlight.
Okay. I took my machine-dispensed hot can of coffee and sat down. 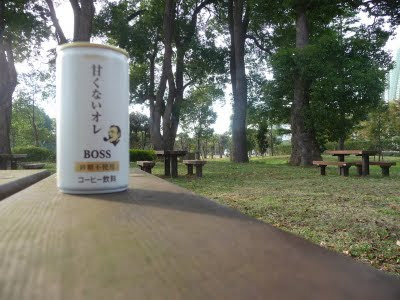 And Hayao Miyazaki sat down with me. It was --- perfect. The quiet. The green. The sun.
I took out my pen and drew. 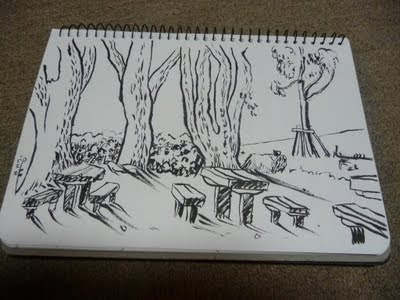 Really, it was blessed by whoever is taking care of zen these days.
Wonderful.
Then, whup-whup-whup! A helicopter. Coming closer. And closer, and CLOSER. Heck, there's two of 'em and they're landing about 20 metres away. 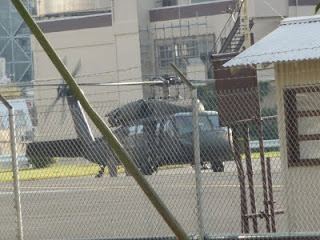 Out get the people, run across the tarmac with one hand on their head just like you're supposed to, then 5 minutes later, WHUP-WHUP-WHup-Whup-whup. They're gone, momentarily taking the sunlight with them.
Then, tentatively, the inquisitive AH? AH? AH? of the Japanese crow returns. Quite, quite different to the sunbaked, heavy-lidded aaaaaaaaa of the Australian crow.
Ah well. I walked into Roppongi. Went ito a high-class shopping centre, which houses the Suntory Museum of Art. It was 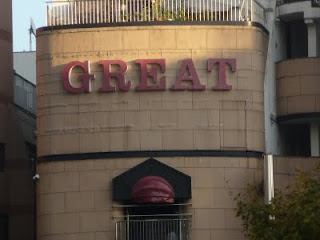 After trying to get onto Skye Ogden, an Australian comicker who's living here, I headed back to Shibuya (making a train mistake on the way, but let's not tell anyone) and on Ebisu (?I think) station I saw this poster, which I'd like to post for my Westagarth Theatre buddies: 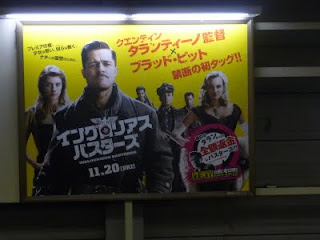 Apparently Quentin is offering a money-back guarantee here: walk out within the first hour and he'll give you your fistful of yen back...
BACK on the home turf of Shibuya, it was time to let my inner otaku bask in the glow of a major manga purveya... 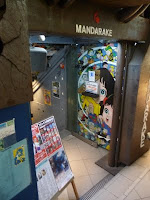 Mandarake, also referred to as 'Mandrake' by the gaijin. Down three flights of stairs to a wooden floored wonderland of manga, figurines and plastic monsters. I nabbed a couple of books, which I will blog further about. But the Osamu Tezuka one, 'Shumari', I began over my udon noodles and tempura dinner. Then a stop at my corner convenience store 'am/pm' for some snacking supplies, and home. 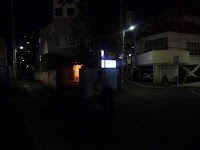 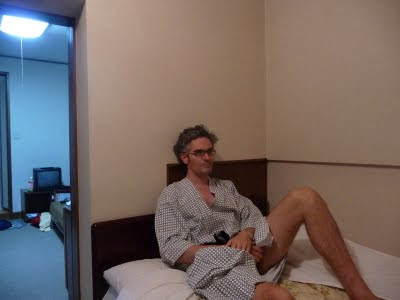 See you tomorrow.
Posted by Bernard Caleo at 2:51 AM

I'm enjoying so much reading your Blog over tea and toast in the morning that it'll almost be a shame to have you come home ( Lovely drawing of the park ).