This morning, after more hours sleep than I care to name (apologies to all those parents out there, and particularly to Susan), I stretched my rested limbs and sniffed ---tobacco? More specifically, tobacco ash. I hadn't noticed the smell when I nodded off but now it was definitely there, in the room. And actually the previous hotel, the Grand Pacific, smelled like this, but in the halls, not in the rooms.

It seems to me, with all of my one week's experience of the place, that Tokyo is a city giving up smoking. Not that people don't smoke, they do, walking along or (my personal favourite) riding their bike or eating in the smoking section of a restaurant. But you know, not many. Most indicative of this is the signed 'Smoking areas' on pedestrian street corners. I would like to take a snap of one of these but there are always people, you know, smoking around them and I'm concerned that they'll think I'm photographing them, like they're the last remaining examples of a dying breed.

Anyway with that eau d'ashtray tickling my nostrils, it was obviously the day to visit the Tobacco and Salt Museum. 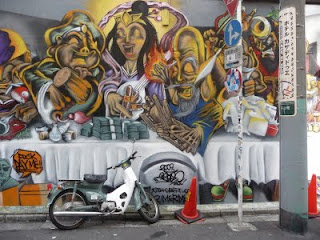 I got a bit cocky and headed though a real bird's nest of twisting and turning narrow alleys crowded with hotels offering yen values for stays of 2, 3, 4 etc hours. This area is not exactly the famed 'Love Hotel Hill' but I am fairly sure that couples don't check into these places to enjoy a quiet game of backgammon. This street art was the first I've seen in town and so I shot it for my Melbourne spraycan mavens, Mark Holsworth and Michael Fikaris.

Locating the street called Koen-dori, I walked along slowly, looking for any sign of this museum. When I saw this bloke, nothing registered. I walked on. Past workmen taking large red wooden cases into a lobby. 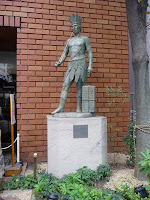 And then I walked past this VERY pink cafe, noting the name (something along the line of ('Le bon plage') but not noting the sign on the brick wall behind it. 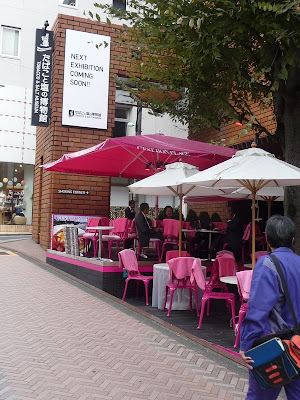 After I'd walked on for what felt like too long, I resolved to walk back even slowlier, when of course I noted the: 1) museum sign, 2) the red exhibition cases being carted in and 3) that the statue was some heavy nicotine user from America del Sud.
Inside the museum I immediately started feeling happy - if Tuesday at the National Museum of Nature and Science was my Natural History fix, then the Tobacco and Salt Museum was my Social History hit.
Below, Christopher Columbus asks the indigenous people of North America for a light. 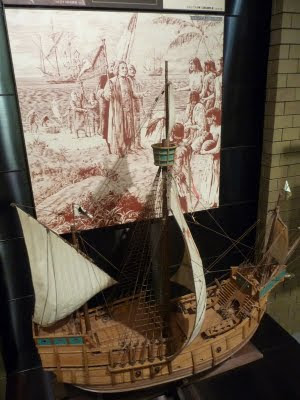 This guy, 100mm tall and made of stone, was in the 'Uses of Tobacco In the New World'. The answer in his case was I think, 'As a drinking straw'. 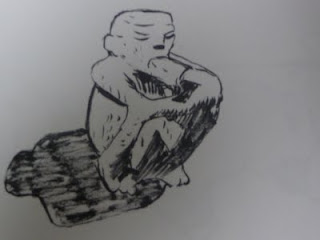 In the same section, about the history of tobacco use, there was an amazing display of cigarette packs from around the world. 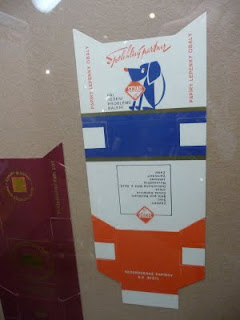 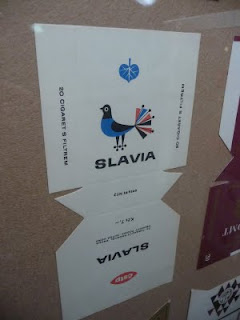 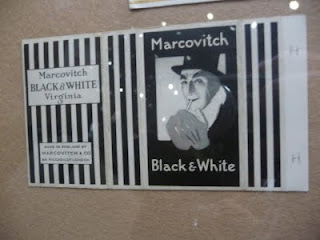 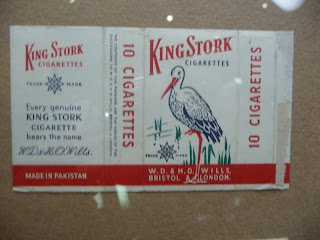 On the next floor we got into the Japanese tobacco story. It kicked off with this life-size diorama showing the wife rolling and the husband shredding the bitter leaf. 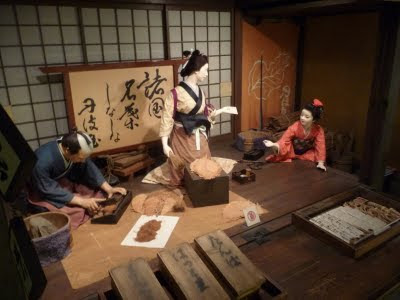 Of course, there were also several of these ladies. I've done something to this one's chin, but you get the idea. 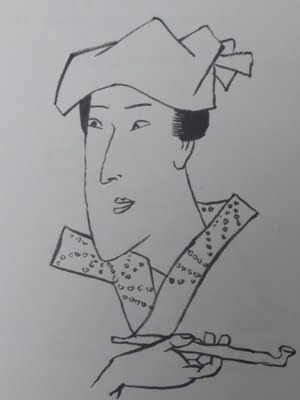 The next floor told the story of salt production. Salt and tobacco are under the one roof because both industries were once run by the government. One of the things that I loved about this museum (and I loved it a lot) was that there was no fear about using dioramas, for instance to tell the story of salt harvesting a long time ago 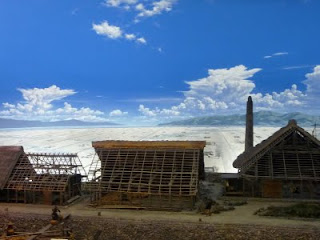 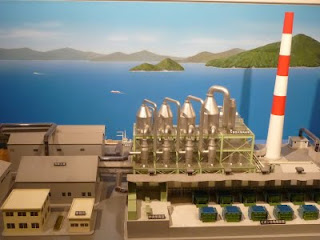 I'd love to tell you more about the museum (for instance about the portrait gallery devoted to "The famous tobacco lovers in Japanese history'), but we've got to hurry if we're going to get to the statue of Hachiko in time to meet Skye Ogeden. 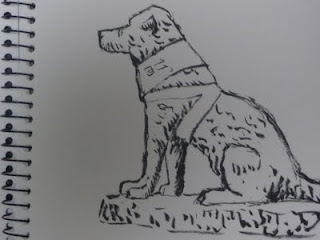 Hachiko used to go to Shibuya station every afternoon to wait for his master so that they could walk home together. After his master died, Hachiko turned up each day for another seven years, until he died himself. That was in 1935. There was huge interest in his story, the statue was put up, and these days, as a meeting spot, it's the Flinders' Street clocks of Shibuya station.
While waiting for Skye I was drawing the dog, who was wearing a silk sash, and many tourists were snapping away (as did I, but I'm afraid you're getting the drawing) when an older Japanese fellow came up to the statue, hoisted himelf up with some effort (the head would be 2 metres above the ground) and gave Hachiko an repectful, approving pat.
Beautiful.
Then Skye, who had been also drawing, tapped me on the shoulder and off we went. Ah, to be following a local, who has the language and their own twists and turns and favourite spots. 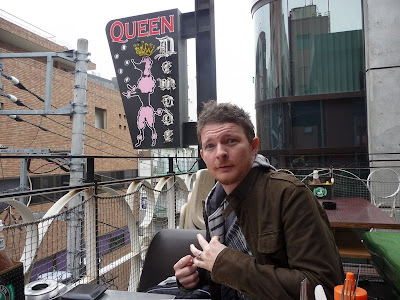 Skye assuring us all that the name of the place isn't his profession or anything. No folks, Skye Ogden is an artist working on video games, video clips and best of all, comic books.
We ate and dranks and talked about comics (making/editing/publishing) and Japan and Australia. 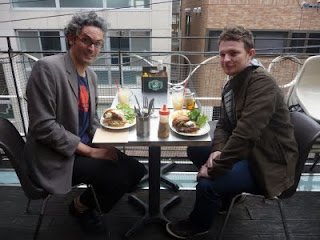 After she brought our food, the waitress took this shot of us, about to plunge into the plates before us.
In the midst of our conversation, this fellow landed on a rooftop above. A good omen I think: I hope Skye and I will be able to work together in some way in the future... 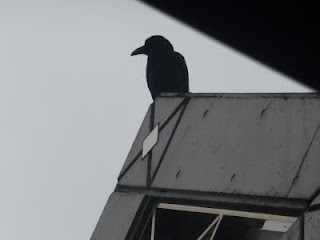 Skye took me to a manga place and gave a much-appreciated primer on artists, titles and formats. We got coffees and took them upstairs and watched the human traffic stream back and forth across Shibuya Crossing. And talked some more. Our conversation got me re-fired up about where comics culture is going, in Australia. Certainly it's choofing along pretty well right now, but/and this is certainly the time for artists and editors and publishers to really WORK, to push ourselves and make some great comics. 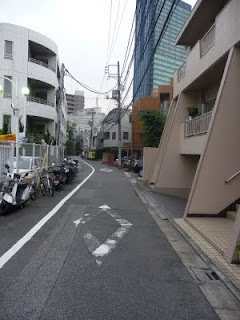 I waved goodbye to Skye and travelled homeward via Bunkamura, a classy shopping centre/arts centre (they do that a bit, here) and the post office. Above is my street, with Fukudaya at the end on the right. 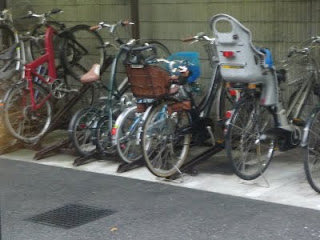 Outside an apartment block, the bike parking. This one's for my dad, who I think would love the bike culture here. What do you think of those ramps, Salvatore?
Back in my room, the lovely Fukudaya folks had left the makings for green tea, so there was nothing for it but to brew up, feet up and draw a drawing. 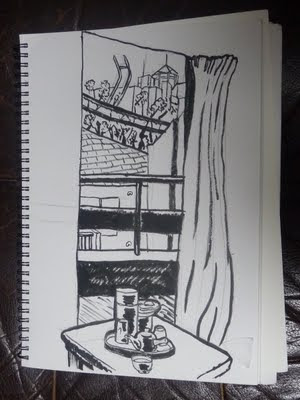 Posted by Bernard Caleo at 2:24 AM