This day dawned bright and clear and we went up topside for breakfast and were rewarded with our first view of Mount Fuji from the hotel - we had glimpsed it in between whizzing buildings on the way in on the bus last Tuesday, a decade ago, but now here it was all calm and stately, accompanying one's morning croissant. Our friend Mami works at a museum near the mountain and this sight made us think of her.

Its accompanying peak, Mount Krishna-Pillay, is actually Chris' head silhouetted in the foreground. 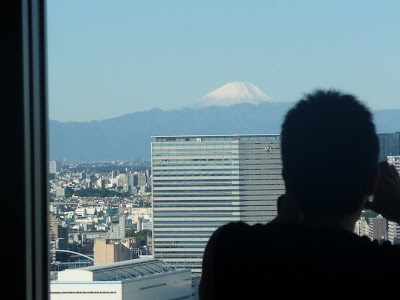 Another monument on Odaiba island is the lady below, a present from France. 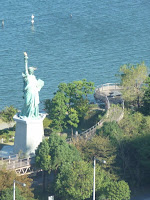 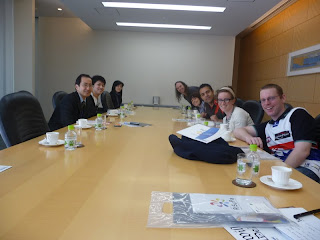 One of the many amazing things about this trip has been how honoured and welcomed we have been by each of the places we have visited. Treated with respect and care and interest. It has been quite humbling and very lovely. 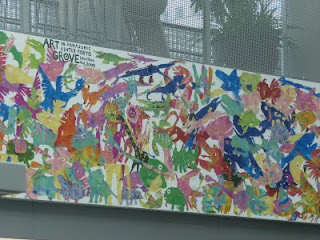 Above, a mural at the Panasonic centre. 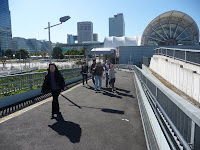 Walking back towards the Yurikamome line to catch the train into town, and then out to the National Museum of Nature and Science. That's Noriko way out front. The NMNS is the place where the mushroom manga exhibition was. When we got there, I was astounded by my reaction: overwhelmed by the pleasure of the familiar, of the recognisable, of home. A natural history museum, at last, after all these science centres!
Again, we were greeted as honoured guests by Koichiro Harada and his colleague
Noriko Morii and taken to the amazing 360 degree theater (sic), where the audience stands on a bridge through the axis of a large sphere and you watch a movie being screened above, below and all around you.
Then we ran about like a pack of schoolkids. The place was packed as today was a public holiday, National Culture Day. 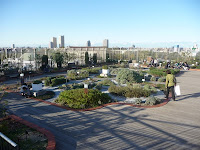 This is the herb roof garden at the National Museum of Nature and Science. Hopefully, at the end of this post, there will be a little slide show/movie of the other thing you can find on the roof there. 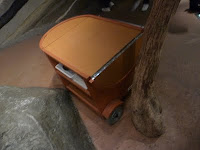 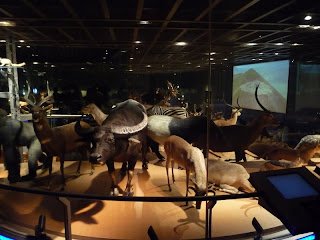 It's a real old-style natural history museum, and there's something extremely satisfying about that. Lots of STUFF, including STUFFED animals. The above is a picture for Tracy-Anne, who's building something similar back at Melbourne Museum. 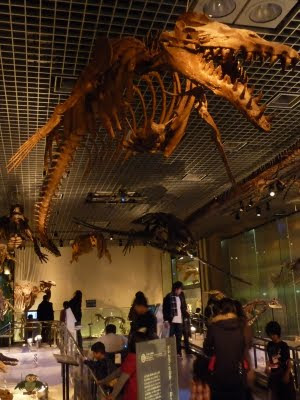 And again for my Public Programs buddies: quite a few walking splashing whales around. Iwill blog further about the dinosaurs here, but look below for a half-slideshow about one of them.

It was then time to farewell Noriko - more tears and waving goodbye in an undergound train station. Then Mitsuru took us to Asakusa, where we visited the Senso-ji, or Senso shrine, with very many other tourists and Japanese people. 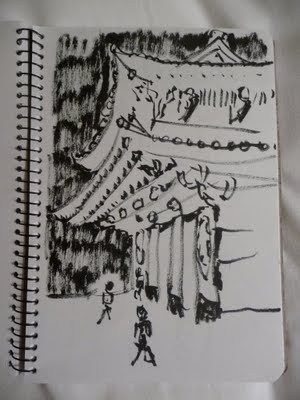 I touched the giant straw sandals hanging outside the shrine, which give good luck to those who walk.
We then went by train to Shimbashi, where we met Yuko and Hiromi who'd been at work all day at Miraikan, for a last supper. 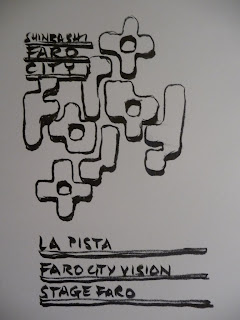 Above, a big decoration/sculpture on a Shimbashi wall.
After which, I farewelled Yoko and Hiromi, as I won't see them again tomorrow like the others will - I will be hunting down my accomodation in Shibuya, Ryokan Fukudaya, as recommended by Scott Matthews. Thanks Scott!

And here's what happens on the other part of the roof.

Posted by Bernard Caleo at 8:52 AM

I was at that museum in 2005, and took a photo of that very same stuff in the glass case! That water buffalo still looks miserable.