On my post-breakfast stroll this morning, I came across this guy who beckoned me to cross the street. They don't all wear hats, the crossing guys, but some of them do, and as you can imagine, the number of those who do is in direct ratio to the amount of goodness in the world. 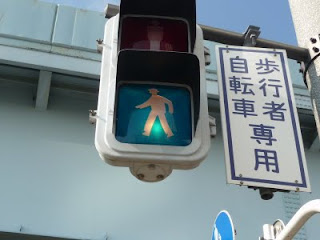 Post-stroll, we were met by the lovely Noriko and we walked though the warm autumn Odaiba Island morning to... Miraikan! Where we were met and welcomed by the Director of Operations,
then given a briefing by Noriko and Nahoko and Yuko, after which we explored the museum for a while. 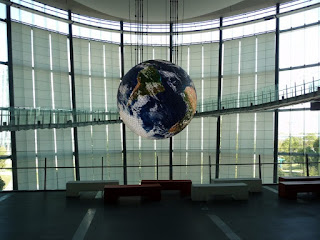 I was struck by the use of affective (ie emotional) techniques being used in the communication of scientific concepts and ideas, even in panel descriptions (ie words on walls) and the frequency and ease with which metaphor was used as a tool, and the visitor's imagination was called on to engage with the exhibits. Miraikan, in short, seemed more playful than an Australian museum.
After lunch I had a coffee (and a piece of cheesecake, if you really must ask) on the 5th floor and pretended to read but watched and drew people. Japanese men do a lot of suit-wearing, and this fellow, clearly on a day off, was wearing his well. 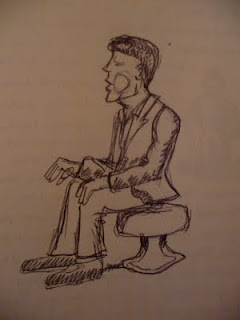 This woman (from a letter to John Murphy, yet to be sent) travelling down to the 4th floor, probably didn't have quite such broad shoulders as depicted here... 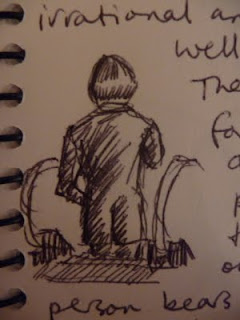 In the afternoon, we met our Japanese Science Performer collaborators! Very exciting! Yoko got us to play a getting-to-you game, and then the whole gang caught lifts, walked down corridors and visited rooms for an hour or so. Below, you can see Motozugu Ueno on the left and Akihiro Kumagai on the right, looking up. That's Patrick's chin, far right. Or perhaps Pete's... 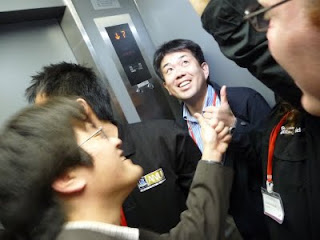 Almost finally, we went up to the restaurant on the 7th level where tomorrow night Thursday night we'll be having a dinner at which many of us will be presenting bits from shows from our museums. I will be hatching a dinosaur, which I hope works... from the left, Mizhuo ('Coco') Awakawa, Mami Ikeuchi, Megumi Osashi, Mitsuru, Nariko, Patrick, Yuko. 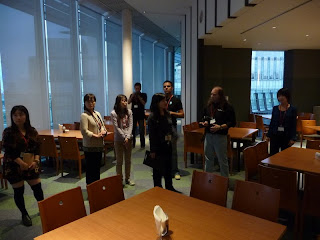 Finally finally (well, before we all got on a train and went to Toyosu, where we visited 'Seria: colour the days', a 100 Yen Shop, and bought scads of possible props, which activity was followed by a barbecued feast at a Japanese/Korean restaurant) we visited the space where we are going to perform on Sunday. 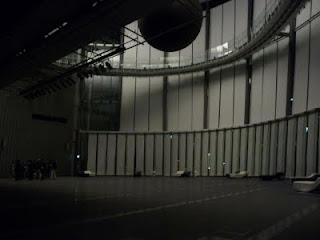 It's actually even bigger and of even vaster space-shuttle hanger dimensions than this picture indicates. It's huge, which is very exciting. Can you see the weeny ants there, on the left hand side of the picture? People. Japanese and Australian people. Japanese and Australian Science Performer people, both terrorised and exhilerated at the thought:
'And WHAT will we fill THIS with, in four day's time?'
Luckily, after dinner, outside the hotel, Patrick performed a quick science trick which turned all our minds to other things... 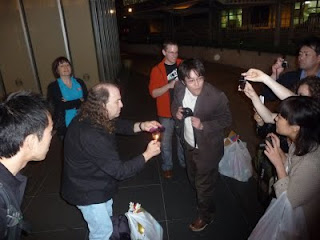 Hi Bernard, loving your blog. But I'm kinda scared for you too. That space is HUGE. My fear for you is amplified by the thought of you consuming canned coffee and pumpkin in ice-cream. Adrienne