Okay, who's here to work?

This morning, both parties of the exchange breakfasted together in the 'Sky Lounge' on the 30th floor of the Grand Pacific Le Daiba. As I slurped down sweet potato rice porridge, Coco ate adzuki beans and told me about the character/demon/ghost Adzuki Arai, a little old bald man who spends his time washing beans, made famous in a manga by Mizuki Shigeru. Will have to track that one down when I visit Akihabara.

What with the view and the demons, we were 5 minutes late in getting to Miraikan for our first session. Never again: Yuko (below left), our process wrangler, was so politely disapproving that it chilled us to the marrow. Tomorrow, five minutes early.

But it was time to hit the floor, to start writing the show. Yuko kept us moving at a clip, and we arrived at a setting (a house) and characters (a family), to help us to tell the story of 'familiar science', the brief which has been set for us.

Then it was time for small group work to start to generate scenes. Below, Hiromi reports from the 'bathroom' group - from left Yuko, Patrick, Motozugu, Hiromi, Mitsuru and Chris. 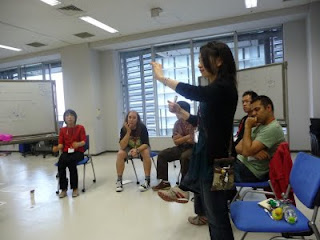 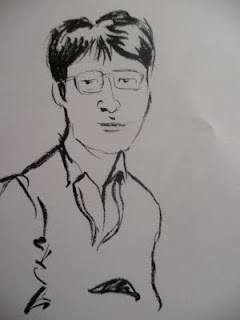 Below, Mami reports on the 'garden' group's progress - Cathy, Coco, Mami and Pete. 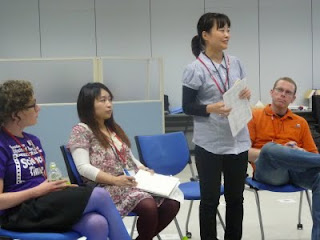 And below is our team, with the stirling interpreter Naoko doing the pointing either just before or just after Aki's report on our progress with the kitchen scene. Naoko, Kate, Megumi and Aki. 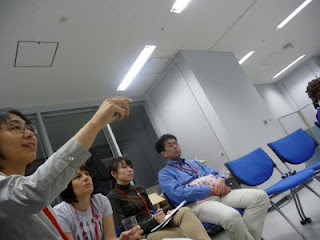 At 4pm we were joined by Matsuda Suzuki from the National Science Museum of Japan, which we will be visiting on Monday arvo. She was one of the attendees at last year's inaugral exchange at Questacon in Canberra. She performs science shows from Hokkaido to Kyushu. She made the point that Japanese science performers do not do so much character work/acting, but that after last year's exchange she was putting more emotion into her shows.
She brought her own matches: 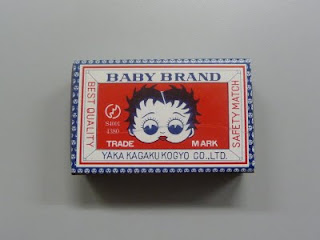 and liked to make things burn. 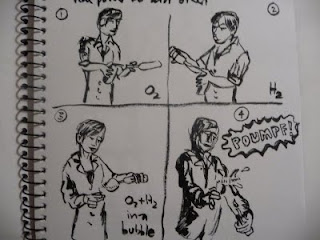 After her demonstation, which examined oxgen and fire, she and Patrick got up and spoke about their experience last year in Canberra. 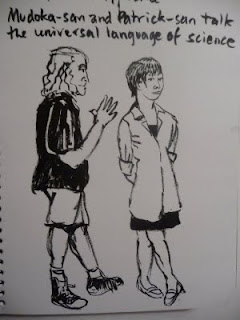 After which (heck, I think it was after which - wow, it was only 7 hours ago and I've forgotton the order of things: I do feel a bit brain-fried at this point I must admit) Patrick delivered a talk featuring snippets of show from each of the Australian performers. Cathy (Questacon) did Newton's third law for 3 year olds, I did part of a show from Melbourne Museum called 'A Fly in Your Eye', aka 'What Poo Do you Do?', Pete (Queensland Museum) did film canister pop rockets, Kate (Scitech) did fire-in-a-flask/pressure change/water filled balloon sucked in, and Chris (CSIRO) did a Tesla Coil/PET bottle detonation. Bang!
Then, was it time for an official welcome dinner? It most certainly was! Up we went to the 7th floor where we were congratulated on being selected and welcomed to Miraikan by Doctor Mamoru Mohri, the Executive Director of the museum, who recalled his happy years studying at Flinders University in Adelaide. Mohri-san is an astronaut who has been up in the space shuttle.
In amongst eating and drinking Australian wine (thanks Embassy!) and Japanese beer, there were more demonstrations from the participants, both Japanese and Australian. Static electricity, annoying noises, centres of gravity, sound waves, dinosaur nativity,
a bit of a custard powder fire ball from Kate, 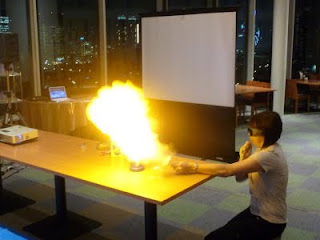 and a big yellow balloon kept up in the air by Aki. 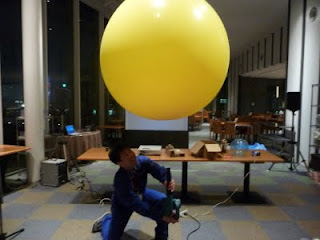 Posted by Bernard Caleo at 6:42 AM