Thanks to Susan and Joseph and Zebedee for dropping me off at Tullamarine. Chris Krishna-Pillay and I flew together to Sydney, where we met the rest of the crew: 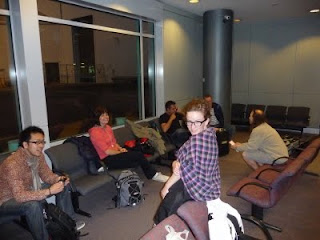 Above from left to right is Mitsuru, Kate, Chris on the phone, Cathy, Peter and Patrick. We nabbed us a snack, we misplaced and then found a suit, and then it was onto QF21 for the nine and a half hour flight to Tokyo.

I read a bit of the Tokyo Time Out guide (thanks H and Torrie), then needed some fiction so turned to John Barth's 'The Sot Weed Factor' (1961) which I've always meant to read and had finally began on Saturday on Phillip Island. Some great language in there so far, including this exchange between Henry Burlingame III and Ebenezer Cooke, 'over small beer after dinner': 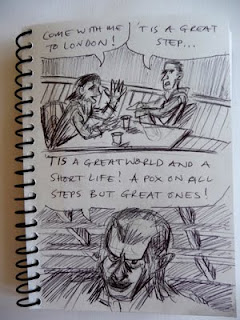 The sun came up over the Pacific, and we dived down to Nariba Airport where we had a couple of breakfasts: my first was a BOSS can o' coffee and a red bean paste bun. It was very tasty and I was very lucky: it could have been anything... 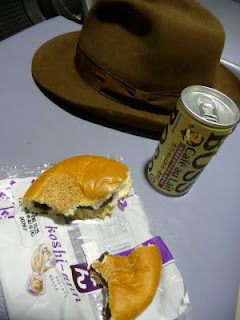 From the airport it was 100 kilometres and about an hour and a half to Odaiba Island (built on a pile of rubbish in Tokyo Bay - hmm, I will check on that). It's a fairly recently constructed place and has quite a Canberra feel (quick note: I am a Canberra fan). Our hotel though, the 'Grand Pacific Le Daiba' is constucted on the Opulence and Elegance school of architecture - zow. Ee.
A quick shower to rinse a couple of plane trips and a bus trip off (looking down into Tokyo Bay the while, la di da) and then... the nightshirt. 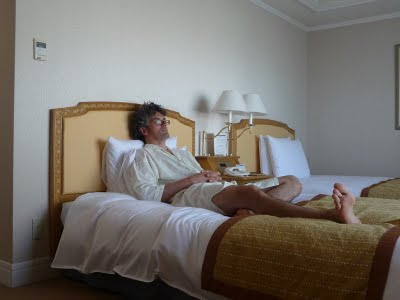 I'm sure it has a Japanese name.
Okay, time to head down, meet the others and have an explore.
Next: the wonder of toilets.

Posted by Bernard Caleo at 7:58 PM

The nightshirt is called a 'yukata.' You cart a big heavy suitcase all the way from the airport to your hotel room, then you take a shower and relax in your yukata.

Have a good time in Tokyo!

Odaiba started off life as an artificial island for defense of Edo in 1853. (Wikipedia is my friend.)

On toilets: Mind the bidets. And if you're trying one of those squatty things, mind your wallet, keys, mobile phone, and anything else in your pockets.

You know, in this photo of you on the bed, you actually look like one of your drawings of yourself. Life imitating art: beautiful stuff.