"It depends on the mood of the machine"

Our last day of rehearsal. Tomorrow's the day.
The above was said by Coco today, about whether the smoke machine will work for our big final trick of the show.
The klim (dried milk, for those not posessed of an extensive WWII POW escape story library) in the rehearsal room always gets me singing that Radiohead song. 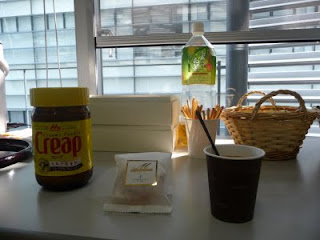 Below, my team in our final burst of writing and development. It was about this time I had a powerful burst of deja vu, as I was demonstating an action that would illustrate Megumi and I drowning in a pool of oobleck. Oobleck-o? Ask your mums, kids: it's made with corn starch and water and is the funnest stuff. It's our first big trick. 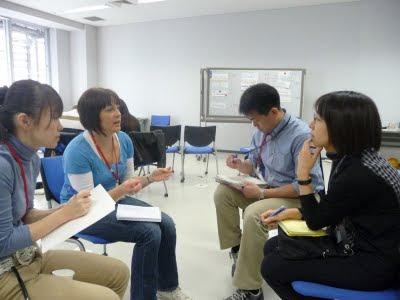 Prize for Best Japanese/English sentence so far goes to Chris Krishna-Pillay for the below, which basically means, "This is the best mess." 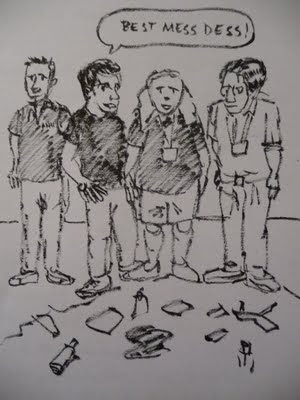 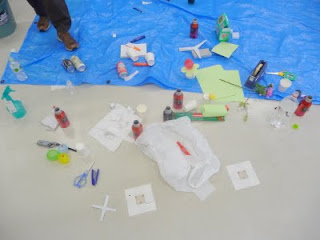 We lunched outside, in the sun, before a dry fountain and a fashion model photo shoot. 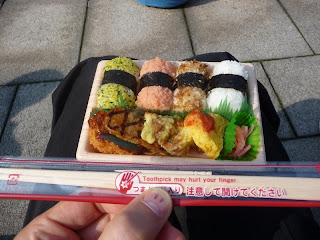 The toothpick, happily, did not hurt my finger. 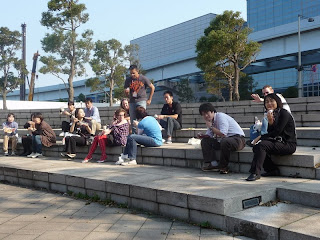 Back in the room, it was time to roll out the astroturf. Things were getting serious. 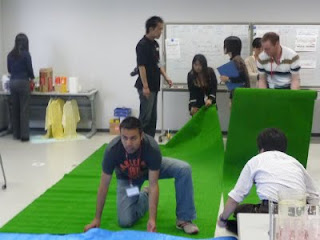 And, after a run, we needed to debrief, to streamline the show, to make things make more sense. Many questions arose about the language that we had decided to put in the show, and whether it now worked in the overall picture. Much got changed. 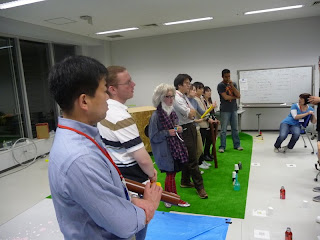 And at this point the conversation got very serious indeed. 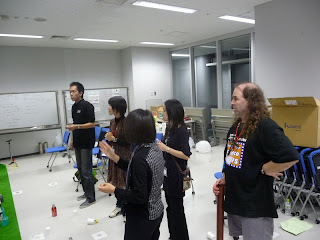 Luckily we were just discussing the fate of the show mascot, Maurice Fitzmaurice. 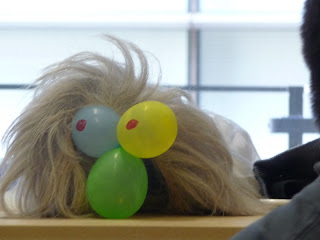 His big monologue remains.
My character has developed substantially. 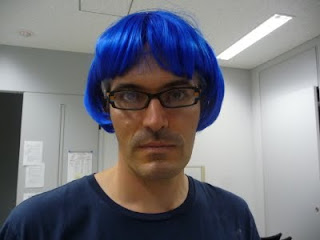 Oddly enough I'm no stranger to bobbed-wig-wearing, see here for my turn as Liz Moran.
At 6pm we went down to the stage under the GeoDome (where we'll be performing tomorrow) to be part of the opening ceremony for the Science Agora 2009 - we got up on stage and each of us spoke for a minute about the experience, made our thanks etcetera. It was an interesting moment to 'see outside' of what we have been doing, out of the womb of the rehearsal room, to realise that this precious world made by these 16 people will be a memory by Monday.
Before the tears began, we hustled off to dinner at the Telecom Centre Building, the square with the hollow centre, I will post a picture, then back for the inevitable late night walk-through and then dress rehearsal.
We get another one in the space tomoorw morning at 8.30am, so I'll mosey off to bed now.
But I know that the Mighty Atom will be smiling over us tomorrow - and I'm sure he'll look after my colleaugues back at Museum Victoria who will be working on the big Children 365 day there. Good on you, my friends: ja mata (see you soon). 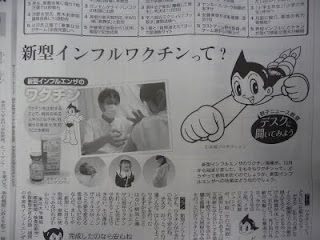 Posted by Bernard Caleo at 8:29 AM

It's been a pleasure Bernard , being on this trip with you, via the surprisingly frequent and entertaining Blog entries ( and sketches! ) Good luck with the performance.