Out and about in Harajuku and Shibuya


So before I embrace a few zeds in preparation for tomorrow, which will be the first day of the Science Performers' exchange, where we will visit Miraikan for the first time, meet our Japanese collaborators for the first time, and get down to business making the show, here's our arvo...

We strolled past the Odaiba Statue of Liberty to Aqua City, our local mall, found the food court and some lunch, which for me meant tempura fish, cuttlefish and vegetables. Finished off by a visit to the jersey-becapped ladies of Moumou, 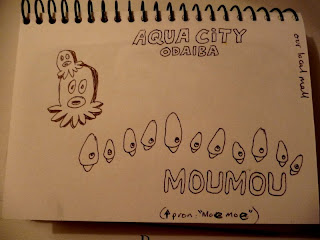 Who created for me a Hallowe'en special, yes complete with finely diced pumpkin. Mitsuru informed me that the island of Hokkaido is famous for its cows and dairy and, clearly, its ice cream too. 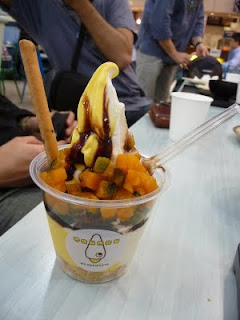 Then we spent a few hours riding the trains and walking the streets, which also means walkways and boulevards. For a city with so many BIG, and some gargantuan, buildings, I got a real sense of space today in Tokyo, of the architecture having room to breathe, of sky being part of the city.

At may points Mitsuru would stop and 'consult' with us as to where to go next, 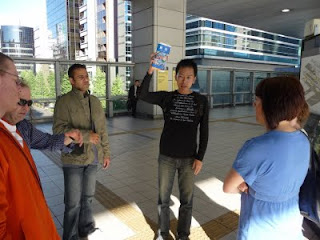 But it was always clear to me that he had a 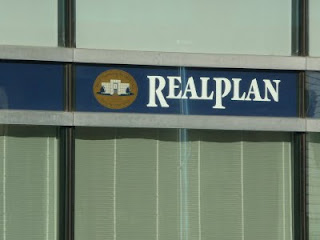 By 4pm he had got us to the top of 'New Government Building No.1', via its lift that climbs 45 floors in 55 seconds (that's Tokyo Time, folks!), joining many other locals, tourists and members of the Japanese National Parks Service gazing down god-like over this sprawling, Godzilla-fearing metropolis.
Yes, the train system is bewildering to me right at the present (so many lines! some government! some private! so many exits at stations! how is it possible to make sense of it all?)
but with a bit more practice, and the kind help of Chris' mate PASMO 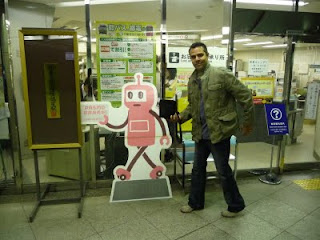 I reckon I'll get there. Maybe.
We sauntered the main drag of Harajuku, diving in and out of sock shops and dodging creperies, of which there are Very Many.
(We were walking down 'Meiji Dori' when I saw - but yes!- a Paul Smith shop! Heck! I dodged inside, all thongs and shorts and t-shirt, and nabbed me some very natty socks. Two to be precise. Photo to follow) 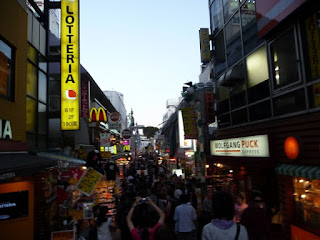 Thence to the big, big, many-screened, many, many peopled (it's Tuesday night, folks! Shouldn't you be home watching telephone directory juggling or something?) Shibuya... Junction? Crossroads? Convergence? Whatever it is, it was certainly very crowded, and crazy, but somehow also calm. No sense of incipient violence beneath the surface. Rather, what seemed to me to be playing behind people's faces was curiosity. Humour. Interest. And by gum, such beauty: the people, their clothes, their costumes... an aesthete's delight.
After a fine downtown (?) downstairs meal, accompanied by Suntory beer and Plum Wine and a bottle of Shioju, we made our way back to the subway, stopping by the line of people holding 'FREE HUGS' signs across their chests.
We caught the JR Yamanote line back to Shimbashi station, and it was on this stretch that I caught my first, much anticipated glimpse of a young bloke reading his manga on the train. A baseball story in a mag called 'Big Comic'. A weekly, 350 pages for 300 Yen (about $3.50 Australian), which I then needed to nab on the way back to the hotel.
But not before very roughly sketching our crew as reflected in the window of the driverless train that brought us to Daiba station tonight. Inked, again roughly, here tonight with the Pentel black ink nylon brush bought today at one of the very many ...'everything' shops... 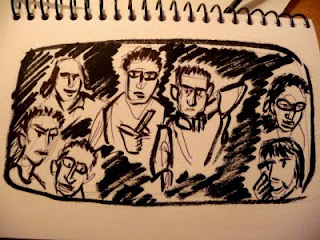 Posted by Bernard Caleo at 7:25 AM

I see a whole blog entry done in ingrish coming our way soon! Man, you must be exhausted. Keep up the good work Bernardo!