Shall I be Mother?

Another great big day, and big great day. Some of us were over at Miraikan at 8.30am, test-driving rockets, but me I ambled over for the 9.30 start with the rest of the crew. We got right into it, with Yuko keeping a firm hand on the timetable tiller. Our first task was to pull each of the experiments, or 'demos' as they're called in the scientific communication world, that were located in each setting in the show, under a common theme expressible by a Japanese character, or kanji. Below, Akihiro and Megumi help Kate to write the kanji for 'change' and 'water'. 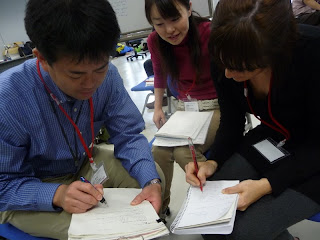 The garden part of the show uses the kanji for 'air' and the third part, 'explosion'.
All this time, of course, and all throughout the process, everything that is said needs to be translated, from Japanese into English, or vice versa. Also this particular day it struck me that there were a couple of words that have double meanings in the strange science performance world we are in. 'Character' refers to both kanji and the fictional people on stage. 'Reaction' decribes what people do and what chemicals do. While this was going on, I did a drawing I like to call "Hairstyles of the Scientific and Performative': 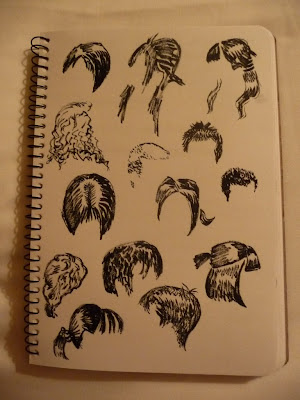 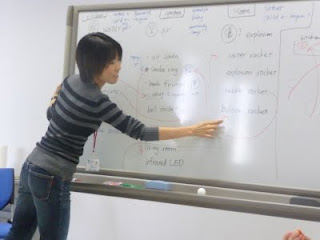 Some time after lunch, a cheer went up as the giant smoke ring box appeared: constructed by the Miraikan technical department over the last day! There WAS a little worry for a while that we wouldn't be able to get the smoke machine going, 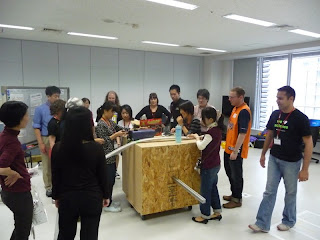 but then we did, 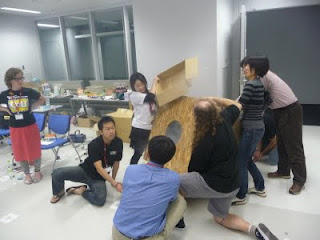 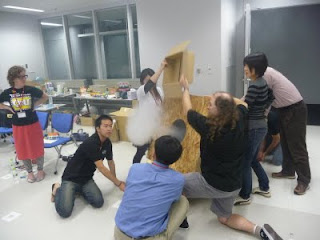 A fairly shambolic (to be fair, it's to be expected at this stage in the process) walk-through of the show ensued. I must say, I am always a bit downcast at this point, in every show I do, because all the great writing and ideas up to that point DOES NOT, not ever, immediately transform itself into great stage material. That metamorphosis is always a difficult process. And that, hopefully, is what will happen tomorrow Saturday. Luckily though, Megumi made friend with Minmi, the dinosaur doll puppet that I used in the presentation last night. And some casting got done, with Cathy as the grandfather 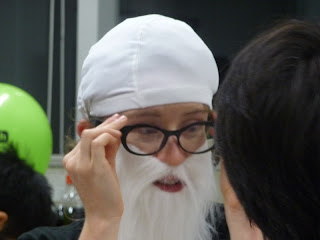 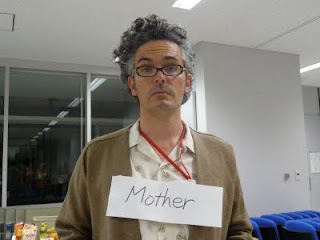 After this long day, with workmen putting the stages and booths together down on the ground floor of Miraikan for the Agora, starting tomorrow, we trucked out again to the 100 yen shop for last minute supplies: rolls of fake grass, check, kilos of corn four, check, frilly apron for me -- nowhere to be found. Hmm. Maybe tomorrow.
We ate dinner at a place called 'Pasta and Sweets: DUCKY DUCK on the beach' and while there, Coco talked me though a drawing of Azuki Terai and then she drew/wrote in the characters: 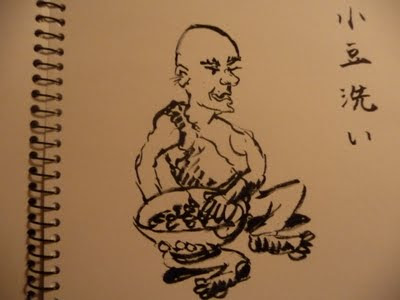 Back at the station (310 yen fare back to Daiba), Pete, Motozugu and Akihiro put their feet up... 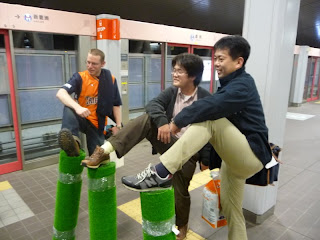 Posted by Bernard Caleo at 8:29 AM