It's one of those things that I never knew I wanted, indeed needed, but when it was issued to me tonight 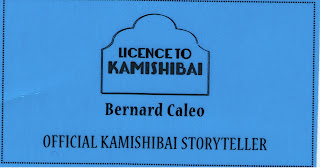 something clicked - it is just the thing that I have been waiting for.

I was out west at Dinjerra Primary School in Braybrook, where Lachlann Carter of Pigeons literary literacy projects has been working with kids from prep to Grade 2 over the past school term. About a month ago I went over and did a couple of kamishibai sessions, including a performance and a workshop, and it must have got them really fired up, because when I got there tonight, there were dozens of black-painted cardboard butai (kamishibai stages), with exquisite pictures within them. Tonight we were celebrating the premiere of films of the children performing their stories. There was a red carpet.  There was popcorn.  It was really very exciting.  Very very exciting And very beautiful.

Boy I'm glad that I (along with 60 Dinjerrah students) now have that licence.  It makes me breathe easier about performing the 'Snail climbs Fuji' story at last week's Graphic Novels! Melbourne! fundraiser. 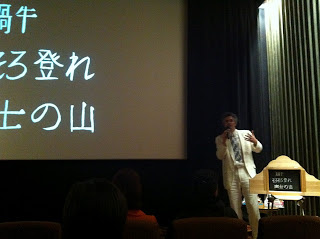 The above picture, taken by Pigeons' Jenna Williams - shows the title of the kamishibai which in toto reads (in English)

Sounds great in Japanese though.  It's a haiku by the great poet Issa, a.k.a 'Cup of Tea'

So there was that one, and a couple of weeks before that, I was up at the Woodend library as part of the Woodend Winter Arts Festival and the cartoonist and artist Trace Balla took those shots of me performing there: 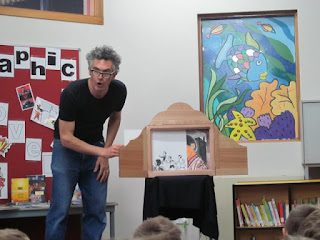 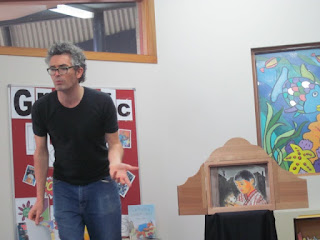 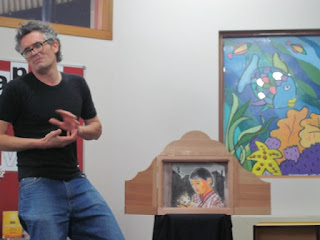 This is from my kamishibai, 'A Box of Stories', set in Tokyo in 1931.  It's a kamishibai about kamishibai. Is that going a bit far?  Perhaps.

But blimey.  I'm glad I have that licence, now.  Really glad. Thank you, Dinjerra and Pigeons!
Posted by Bernard Caleo at 8:43 AM

Hi Bernard! Looks like you had a good time.

It's good to see the kanji for 'katatsumuri' (snail) in the first line of the haiku there. I learned these two kanji to impress my Japanese friends - none of them knew it!

Can I have a license for knowing obscure kanji?