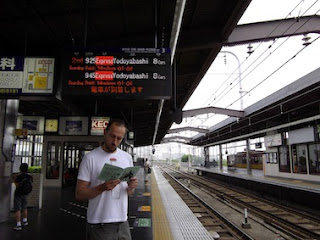 Above, our Tokyo correspondent, English teacher, and dem fine cartoonist J M Schmidt peruses MONGREL 4 at the station. His comics novels* Egg Story (currently being translated into Esperanto!), Eating Steve and The Sixsmiths (this last with writer Jason Franks) are all great books, and recommended for your reading eyes. 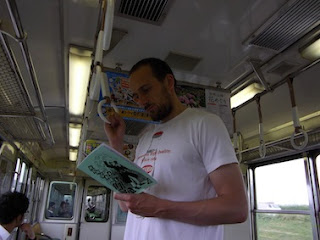 Seeing a MONGREL being read in this, the emblematic illustration of the ubiquity of manga culture in Japan ( 'In Japan, people read comics On The Trains! Really!') is highly delightful to me. 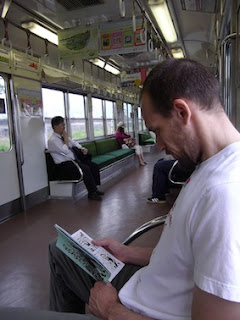 See? No-one's staring at the comics-reading gaijin like he's out of his mind or anything.  I have written an introduction to JM's collection of hilarious shorter comics stories, 'All You Bastards Can Go Jump Off a Bridge', which will be published by Milk Shadow Books later this year.

*a new and entirely satisfactory way of referring to 'graphic novels', invented (I think) by my friend Anne Radvansky last night
Posted by Bernard Caleo at 9:15 PM

It is true what they are saying, my comic Egg Story has indeed been published in Esperanto. Click on any of these three words to see some pages!

Looking forward to #5 of Mongrel, Mr B!