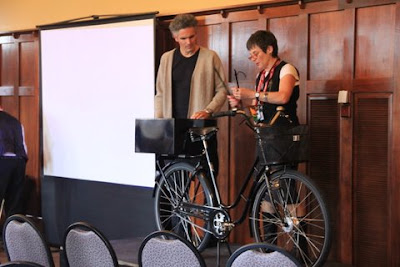 So, a month ago, on May 6 2012, as part of the Williamstown Literary Festival, a group calling ourselves the 'Canterbury Tales Book Club Project' put on an afternoon of performance, song, dance and talk about Geoffrey Chaucer's great bunch of stories written in Middle English at the end of the 1300s.  Above, pre-show, Jackie Kerin (the owner of the kamishibike) and I work out how it's all going to get set up for me to do my bit after the interval. Jackie performed a hilarious 'Pardoner's Tale' in the first half. Jackie also took all of the photos in this blog post - except, of course, this one! 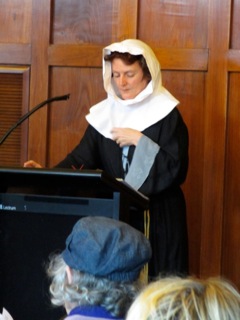 Above, Catherine Ryan, in a wimple of her own design, gives us the 'Canterbury 101' talk. 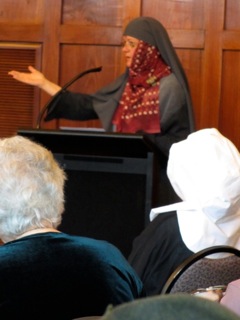 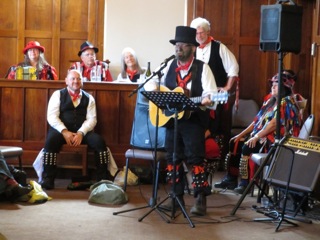 Simon Leverton on guitar was the musical director (a lot of bawdiness going down in them thar lyrics it must be said) and behind him?  Yes, absolutely.  Morris dancers.  They got bells that jingle jangle. 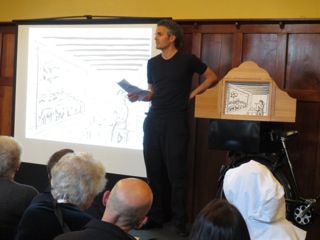 This was the first time I'd ever done the kamishibai box + simultaneous projection, and apparently it worked pretty well.  I must say I'd like to see it myself, to be sure.   For my part I had adapted 'The Nun's Priest's Tale', which I studied way back in the Middle Ages of 1984, taught by my beloved HSC English Literature teacher, Marisa Spiller. 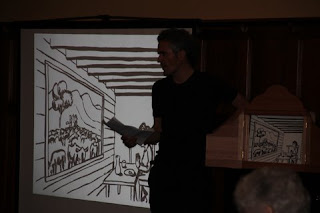 Above, my first image of the tale, depicting the 'narwe cottage' in which lives the widow who owns the rooster 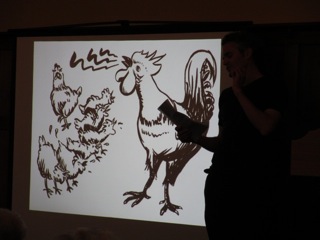 called ('cleped') Chaunticleer.  'He was a real cock', as I say in my translation. And of course if there's chickens then there's gotta be a 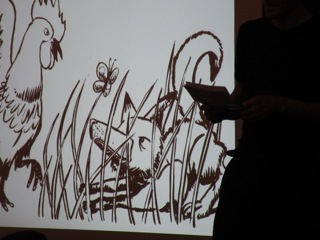 fox.  Let me hasten to add, it all works out okay, but there's some tense moments along the way, ohhh yes.

It's good to have another story in my kamishibai repertoire, and I'm thinking that I will deliver the 'G' rated version of the tale this Saturday 9 June up at Woodend library where I am giving a kamishibai storytelling session as part of the Woodend Winter Arts Festival. 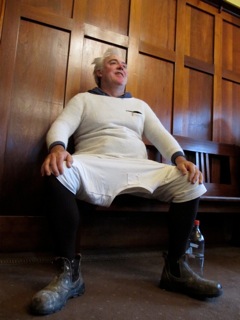 After me came Daniel O'Connell, with a filthy, funny version of the Miller's Tale.  Brilliant.

Highlights of the afternoon for me were certainly the other performances, and also seeing Robin Grove, a remarkable English Literature lecturer (more like 'inspirer') from my university days, and meeting Ted Smith, the builder of the beautiful kamishibai box that I borrow off Jackie whenever I need to tell 'paper theatre' stories.
Posted by Bernard Caleo at 5:04 AM