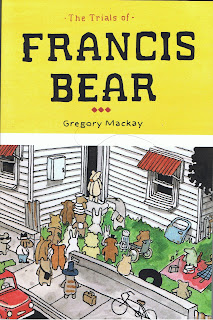 I was back on 'Smart Arts' on 3RRR FM with Richard Watts this Thursday morning just gone, and I spoke about a few comic books which were part of the 'Skinny Arse Comics Launch', itself part of the Melbourne Writers Festival 2012.

'The Trials of Francis Bear', above, by Gregory Mackay, continues to follow the hapless, sometimes hopeless, inebriate and unemployed stuffed bear. Unlike the previous simply eponymous collection, this new book has more of a narrative arc running through the whole book. Similarly however to the previous book, it is hilarious and beautifully cartooned. 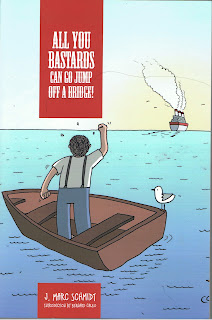 'All You Bastards Can Go Jump Off A Bridge! by J Marc Schmidt is also very funny and also cleanly and confidently drawn, but it is more varied in its offerings - it is a generous compendium of short stories that J. Marc originally posted to the web. Many of them are experimental, with some of them having an almost improvised sense about them.  Here we are watching someone experiment with the medium, stretching it and toying with it - there's great work in this book.

Both of the above have been published by James Andre's excellent Milk Shadow Books - go there and buy multiple copies of both!

Another Melbourne publisher is Matt Emery who publishes under the name of Pikita Press, and he launched 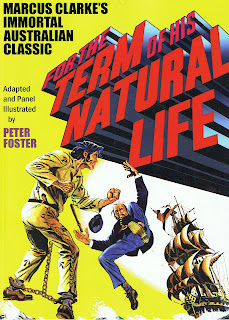 at Skinny Arse: Peter Foster had his adaptation of the 1874 Australian convict classic published in black and white in 1986 by Greenhouse Press, and it's taken 26 years and a lot of work by Peter on the computer to get it out in colour.

Also at the Festival I was honoured to be on a panel in the Schools Program, 'Drawn to Stories' with local cartoonist Oslo Davis 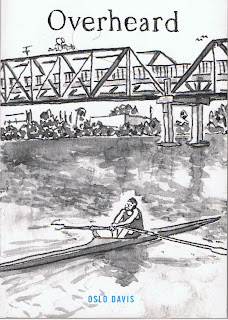 And London illustrator/cartoonist/pictorial theorist Joanna Walsh, aka Badaude, whose book 'London Walks' is a remarkable walking guide to many different areas of London. 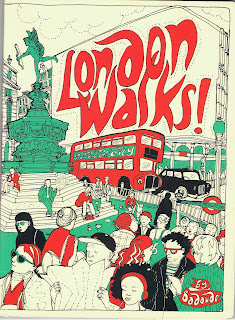 Joanna, Oslo and I talked about drawing as a way of discovering, as a way of thinking, as a way of writing. Then I threw a whole lot of stalks of silver beet (which Joanna called 'chard') at the audience, which went down surprisingly well.

Posted by Bernard Caleo at 8:13 AM

Frances Bear was one of my favourites when i was a child. Who is this Francis character? This feels wrong, like when they shot "High Fidelity" in Boston instead of London. Childhood fears aside, thanks for the recommendations Mr Radio Man.