At the beginning of last year, 2012, I began a 'monthly comics pamphlet' called MONGREL. I asked people to subscribe to it, and undertook to send them 12 issues in 12 months.

MONGREL is a comic book which when complete will answer the question which keeps me awake at night: 'Is Australia real?'  It stars 'The Uncanny Expats', 'The Creatives', and 'Salvation Jane'.

And during 2012, copies of the issues went to some interesting places: here's MONGREL 5 on Park Street Boston, with the Massachusetts State House in the background, in which, my friend Narayan Khandekar assures me, the sacred cod is kept. 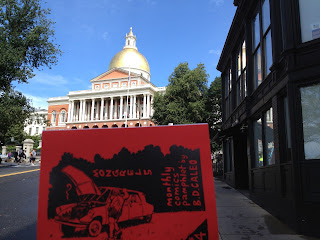 Here's issue 5 again, this time in Braidwood New South Wales, at an exhibition called 'Taking The Piss' curated by Julian Davies at The Left Hand Gallery in September 2012. There's some original artwork displayed next to some working drawings, some writing notes, and an envelope containing all the pencil rubbings that I erased off every page of the 8-page issue in getting it ready for printing. 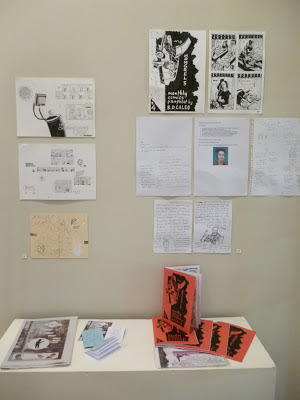 And yes, to the left there is a selection of work by the wonderful Michael Fikaris, a great Melbourne cartoonist.

I was interviewed by MILK magazine about making comics, and the article featured some artwork from MONGREL 6, showing the stages of a page in progress. The article also featured, as the lead image, a remarkable portrait of me painted by Gina Kalabishis, titled 'Comic Man' 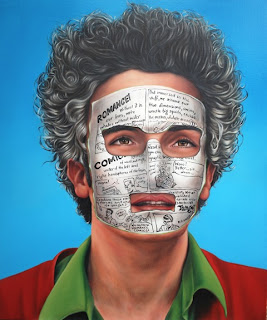 I was the September blogger in residence at Inside a Dog , the Young Adult literature website, in which I wrote and posted pictures about the process of writing MONGREL 7. Now when I say that I am only now getting around to actually drawing that issue, four months later now in January 2013, you will see the slight discrepancy between that pace and publishing a monthly comic.

I blame it all on becoming a filmmaker. In 2012, with Daniel Hayward, I made the film 'Graphic Novels! Melbourne!', which examines comic book culture in Melbourne and which you can find out a lot more about here. We premiered it in November 2012 and next week we are taking the film to the great comic festival in Angouleme, in France. And then on to Berlin, Hamburg and London.

Exciting, yes, but it plays havoc with the MONGREL production schedule!

But never fear - I knew you weren't about to - MONGREL will continue to be made throughout 2013, and by the end of the year, the full 12 issue series will be complete.  And so, particularly if you're a MONGREL subscriber, don't you worry about a thing.  MONGREL issues 7 - 12 are coming.

Unless I start work on another film...

Posted by Bernard Caleo at 7:04 AM