Back in January 2013, Daniel Hayward and I climbed aboard a big big aeroplane to begin a three-week European tour presenting our documentary feature film, Graphic Novels! Melbourne! in France, Germany and England. International man of mystery Bruce Woolley accompanied us as far as Dubai, where we bid him a fond farewell, but only for a week (more of him anon). Dan and I flew on to Paris. 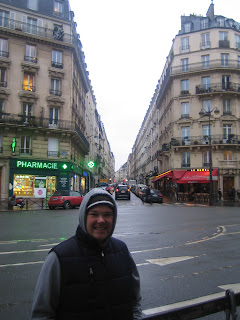 So, it's been 20 years since I've been in Paris, and Dan had never been before, and it was magnifique. Our lovely friend Dominique lent us an empty apartment in the Rue de Reuilly, near the Gare de Lyon, to stay in for the few nights we were there. 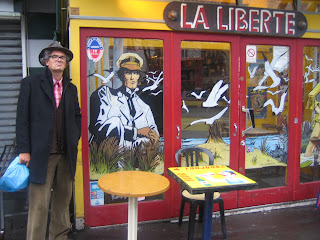 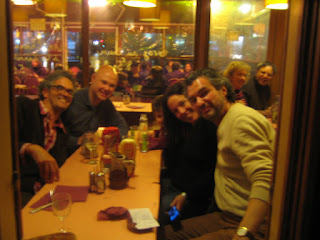 On our first night we rendezvoused at Notre Dame cathedral with our Sydney friends, academics Adam and Alphia and their son Addison (that's Addison looking around Alphia's hair) and talked and ate and walked and talked. 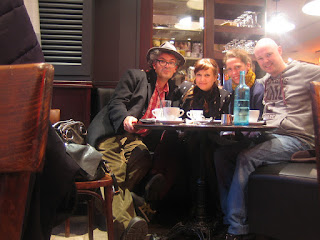 The following morning, early (the streets dark and wet, the smell of the morning baguettes wafting deliciously out of the boulangeries) we rendezvoused at Charonne Metro with Melbourne artist friend Lily and her friend writer Maude and went and had coffee and croissants for our petit dejeuner. 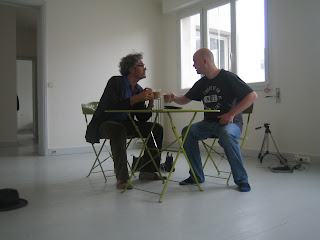 Then returned to our digs, toasted our good luck and went back to bed. 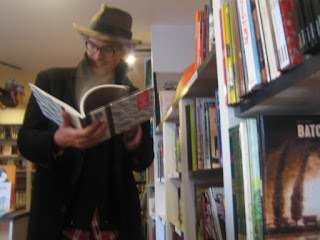 After a snooze (ah, jet lag, you old fiend!), we visited Lily's exhibition in Belleville, and around the corner dropped into a bookshop and marvelled at the selection of comics, or rather BD (bande dessinees) on display. Like true colonials, however, we were most delighted to find Pat Grant's 'BLUE' in its French edition (published by Ankama) and 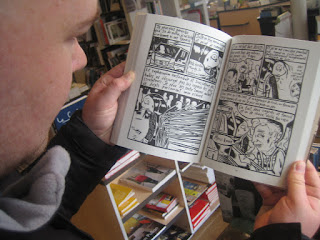 some Mandy Ord in an edition of the anthology 'Turkey Comics' (published by The Hoochie Coochie - the French publisher of Gregory Mackay's 'Francis Bear' books too). 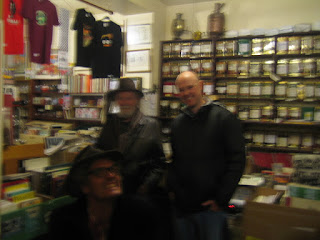 We spent a great evening with Gilbert Shelton, who took us to a brilliant tea shop/comic shop 'The-Troc', in the rue Jean-Pierre Timbaud, run by his friend Ferid, who took this picture, and by that time, as you can see, things were getting beery...

NEXT: Angouleme
Posted by Bernard Caleo at 6:17 AM