Last week it was my birthday and I turned 45.  Last night I was at the parental home, where my family gathers every Monday night for a meal. Parents, brothers, sister, spouses, children, cousins gathered as usual. And then, unexpectedly, my friends began to arrive. And arrive. And arrive. WHAT was going on? 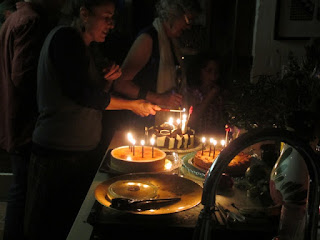 Candles were lit, the song was sung, cakes were cut. 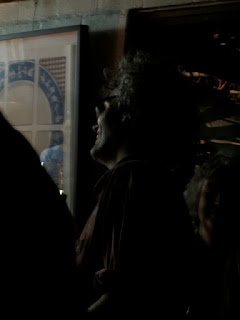 And then Part Two began. 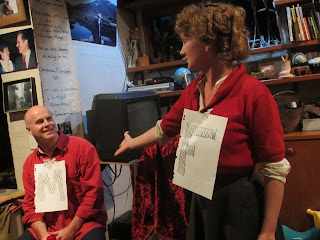 The wonderful Fleur and her bloke Marcus got up (other suggestions: 'Male and Female', 'Marxist and Free Market', 'Mongrel and Flaneur') and Fleur explained that maybe just maybe it stood for 'Fantasist (or Fabulist) and Maker' and suggested that those two titles could be applied to me and that if they could, both roles could probably do with 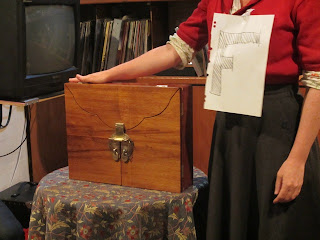 a kamishibai box of their very own. 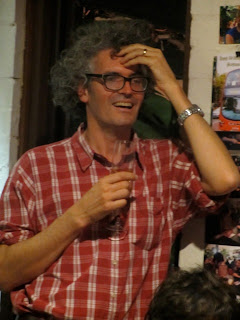 I was something flabbergasted, alright. Oh boy. I have been borrowing fellow kamishibaya Jackie Kerin's beautiful kamishibox, or K-box, designed and built by Ted Smith, for the last couple of years. This beautiful new one looked very like, very like. 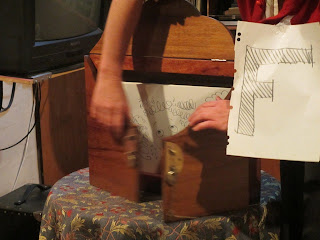 And not without reason - Fleur had got onto Jackie and placed Ted's plans in the hands of Marcus, who as it turns out is a master wood artist. The timbers in this case are meranti and red gum, making it a darker, redder K-box than the one that Ted made for Jackie. 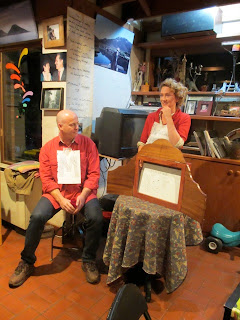 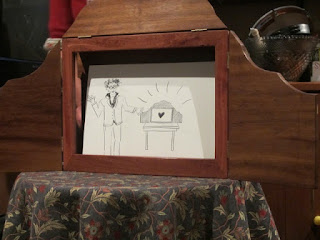 Well, as you can well imagine.  I was staggered and astonished and absolutely delighted. The box was placed on Leopold, my bike, wheeled in for the occasion, and I managed to blather a few words about sophrosyne and poiesis and the Ancient Greeks before just saying, thanks. 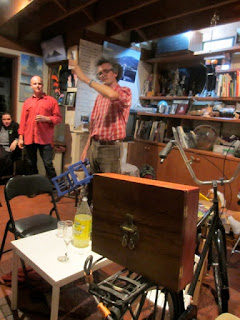 And again, thanks. To my family, to my friends, to Jackie Kerin, for smuggling the plans across the border, and for the photos in this post, to my wife Susan for her part in all this wonderful skulduggery, and to Fleur and to Marcus, builders of dreams.

It's time to get writing and drawing and performing.

Posted by Bernard Caleo at 8:21 AM

Congratulations! (2 months ago). That looks beutiful. I was just in my first `approaches to teaching the arts' tute (doing me GDE Primary this year; as you know I already write stories and songs and play music for kids, may as well teach em too) and we're supposed to build up a list of interesting resources to share with the class. My 2nd thought was `Bernard Caleo's kamishibaya shows and general presentations about making comics' so, I'm extra happy for you.