Still 'At the Frontier' - day 2 Wednesday 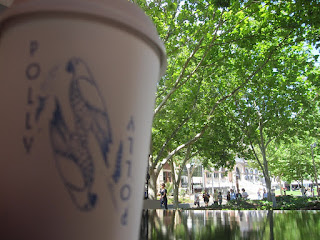 One of the amazing things about the city of block of Perth on which the conference is being held is that, looked at a certain way, EVERYTHING is on it: bordered by Roe, Williams, Francis and Beaufort streets, it contains the State Theatre Centre (where the conference sessions are), AND the Art Gallery of Western Australia AND the Western Australian Museum AND the Perth Institute of Contemporary Art (PICA, which I visited yesterday) AND the State Library of Western Australia and something called Arts House too, probably just for good measure.

Above, my afternoon coffee godzillas the Western Australian Museum, which is run by the bloke who spoke first today, Alec Coles. He has been the CEO at WAM for about 18 months, and spoke this morning 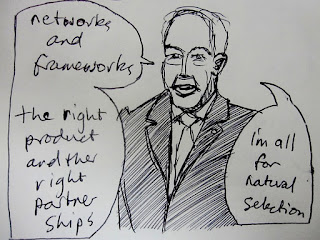 about a regional program for the many museums operating in WA, particularly from the viewpoint of his years of experience with a regional approach to museums in the north-east of England. In his talk he was really showing us the many models from which Western Australia might choose to develop the relationships between its museums, particularly those of differing sizes.  In this way it echoed John Holden's talk of yesterday, but with the engagement in this case being between museums, rather than museums-to-visitors. 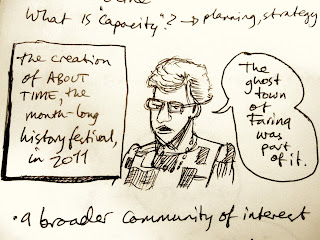 Next up was Margaret Anderson, from the History Trust of South Australia, who spoke brilliantly about their work in raising the profile of history in South Australia, and their grand gamble in creating a 'History Week' program in the mid 1990s, which took off to such an extent that this year they needed to expand it to a history month (!) whose name you can find above.  She also spoke about an amazing web history project called Bound for South Australia, which is a blog from 1836.  True. Have a look.

I then attended a session about travelling exhibitions, featuring presentations by Catherine Czerw 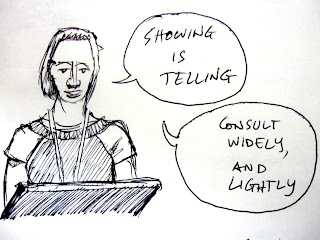 Jane King, from the Museums Australia WA branch,(but not for very much longer) who delivered the best line I have heard thus far: 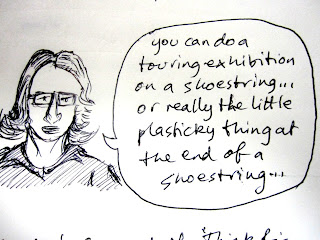 And Catherine Belcher from the Geraldton location of the Western Australia Museum whose great-sounding exhibition about mining in the mid-west is going to close on Sunday - I'm going to miss it! Gnn! 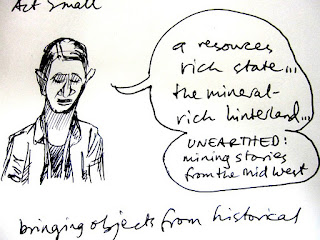 All of this talk about shows on the road and remote locations made my feet itchy, so I went over and crunched again on Fujimoto Yuri's 'Broom' at PICA 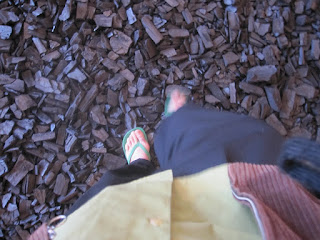 And checked out the very beautiful 'Perth Cultural Centre Play Space' which is outside the museum, featuring sittable-onnable sculpture and outside musical instruments (David Perkins, these shots are for you...) 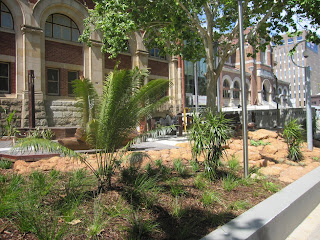 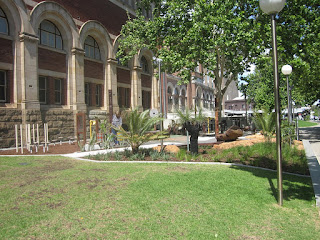 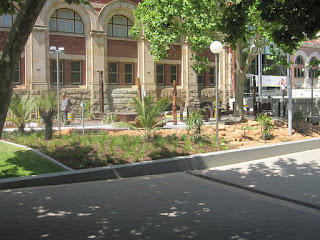 And then I cycled Brian down to the Perth Convention and Exhibition Centre (actually he and I got lost, and then trapped, in the bus car park underneath it for awhile, but we needn't dwell on that) to go and see 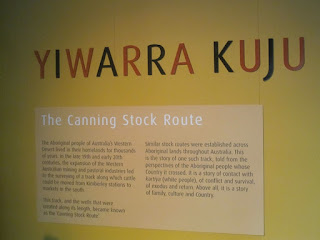 A really quite incredible exhibition which opened in Canberra at the National Museum of Australia earlier in the year, and now it's over here which is its home, because the Canning Stock Route is in WA and so is FORM.  These guys - and it turned out that I knew two of them, and how great to meet Carly Davenport and Monique La Fontaine again - have put six years into the Canning Stock Route project, out of which this major and massive exhibition has developed.  It features paintings from Aboriginal artists from the many language groups along the Route and their stories and songs and films and objects.  It's pretty immersive and amazing and the Canning Stock Route works brilliantly as a central braid that ties together so many stories.  Next it's going to Sydney to the Australian Museum 17 December 2011 - 22 April 2012, so all my easterly friends, plan your trip to Sydney. But really, you should see it here. You have until November 27.  And over here, it's free.

I reckon this exhibition will come to mind each morning that I cycle into Melbourne Museum along the Canning (Street) Bike Route.