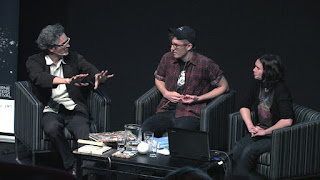 Once we got back from GRAPHIC up in Sydney, it was time for the Melbourne Writers Festival in Melbourne.  This festival has had more and more comics content over the last few years, which is great to see, and above you can see me, Pat Grant and Mandy Ord talking about graphic novels in general, and their ones in particular, as part of the MWF schools program. 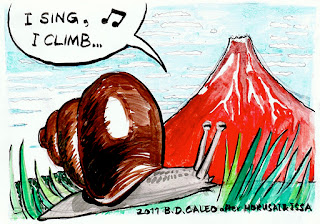 Also for the schools program, I presented a kamishibai session at Artplay, in which I spoke about the form and told 3 kamishibai stories: a new one, 'A Box of Stories' (a kamishibai kamishibai); the Fuji snail story (from 'What It Is' #4), and my very first story, 'The Legend of Rat Boy'.  In the lead up to this session, Michael Shirrefs on ABC Radio conducted an interview with me about kamishibai and even filmed (for radio!) the Fuji snail story - and that's all here.

There were cartoonists drawing live outside the National Gallery, there was the launch of a beautiful new comic book from a new-to-comics book publisher (more about this next post), there was a session with the great and terrible Jim Woodring (and anybody who has heard him talk about 'the Age of Cake' will know what I'm talking about here), there was of course the Oslo Davis-edited comics newspaper 'Drawn From Life' and there was the 'Martin Martini In(k) Concert'.  Hoo hah! 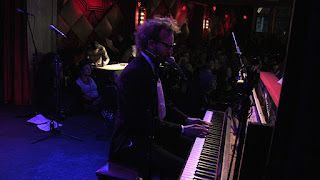 This last was at the venue The Toff in Town, where Martini and band played a suite of songs from his 'Vienna 1913' cycle (of which I am a big fan), while Jim Woodring - 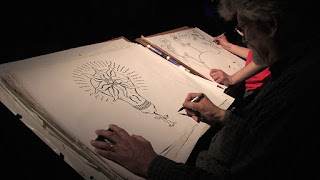 - and a rotating cast of three fine local cartoonists - 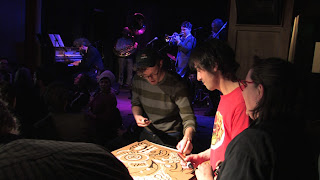 - Pat Grant, Andrew Weldon and Jo Waite - kept drawing live while the band played on.  The audience got to listen to music and look at pictures: 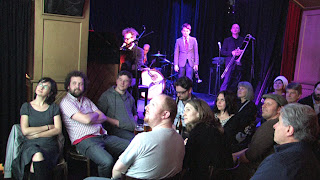 Yes, it's some sort of bliss, as this crowd of cartoonists shows.  The idea comes from the Angouleme Comics Festival in France, where Mike Shuttleworth had seen some 'Concerts du Dessins' (Drawing Concerts) in January of this year and come back to rave about them to Steve Grimwade, the director of the Melbourne Writers Festival and a hoopy frood who really knows where his towel is, to boot.

Photos in this post are courtesy of Dan Hayward and Stephen Elliott, cinematographers supreme!

Posted by Bernard Caleo at 4:30 AM