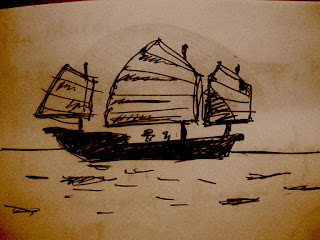 So today was the first day of the Museums Australia/ Interpretation Australia joint conference, 'At the Frontier' - all 500 or so of us delegates set off to sea together in the very new Heath Ledger Theatre in the State Theatre Centre (opened in January of this year).

The conference was introduced, we were welcomed to country, the Western Australian Minister for Culture and the Arts declared the conference open, and then we heard from this guy, John Holden, about 'Next Generation Cultures' - it's anarchy, folks, in the UK! 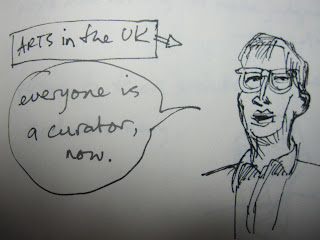 Yes, apparently everyone is.  And museums need less to deliver to their audiences than to find their relationship to their audiences.  In fact 'audience' might not be the right word any more,  What about 'participants'?  This next generation want to: 1) enjoy 2) talk and 3) do, according to John's friend Charlie Leadbeater. So there's that. 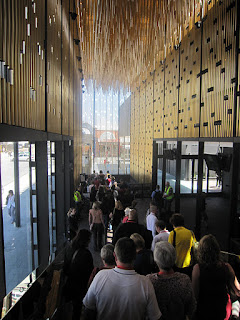 Later in the day I attended a panel called 'Ancient', which was brilliant. Kevin Thiele, the head of the WA Herbarium, hails from 'the east' and is always putting his foot in it with his Perth colleagues with statements like 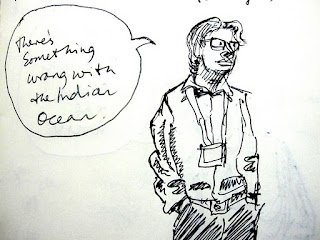 But he was a great speaker about the challenges faced by herbaria in terms of becoming more open to their audiences/participants. 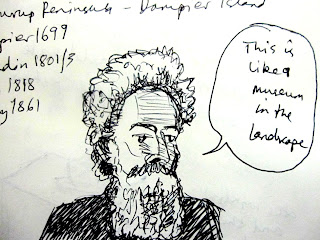 spoke passionately and brilliantly about the rock art petroglyphs on the islands of the Dampier Archipelago - he estimates that there are probably about one million pieces, which would make the archipelago the richest area of such art in the world.  And he eloquently painted a picture of the destruction of such art that happens when we allow development to occur pell-mell.

In the next session, I delivered a petcha kutcha presentation (20 slides, each shown for 20 seconds) about our theatre work at Melbourne Museum over the last 10 years and rather think I stuffed too much in. Ah well.  Also in that session was the wonderful Lily Hibberd, though, talking about her research and writing and artwork interrogating the use of solitary confinement and the persistence of the 'model prison' system in the treatment of prisoners, refugees and mentally ill people for 150 years.  It was chilling stuff, Jeremy Bentham's rotting head being used for a football notwithstanding. 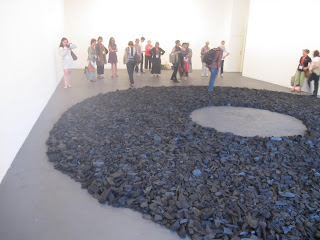 At the end of the day I went to PICA to hear the curators of the exhibition 'Alternating Currents: Japanese art after March 2011' talk about the works on show.  Above, someone 'plays' Fujimoto Yukio's giant record made of charcoal - you walk on it and it crunches. Great.  Curator Hashimoto Azusa commented that Fujimoto-san has said that 'listening is a very creative act'.  I tend to agree. 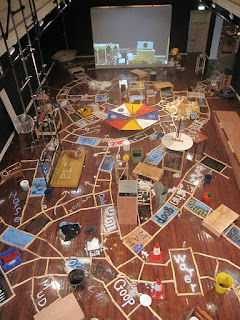 Looking down from the first floor onto Izumi Taro's massive sugoroku board installation - it was described as a game without beginning or end.  We ended our tour at the 'Yellow Cake Street' cafe, devised by Nadegata Instant Party, which was the PICA bar remade as a... 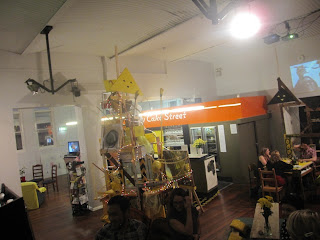 cafe place to buy yellow cake (delicious) and beer.  I drank and ate and then cycled Brian back home, only realising that I'd overlooked dinner after a phone call to Susan - it's time for a late night visit to the 2 minute noodle shop, folks!  Ahh.  That's better.

Ready for bed and a sleep and a dream and then day #2.
Posted by Bernard Caleo at 7:39 AM