Remaining 'At the Frontier' - day 3 Thursday

So.  Funny thing. This evening, after the conference session featuring John Ford (he makes light: see below), I cycled back here to the Goodearth hotel, phoned my favourite people in the world, then sauntered back outside and caught the (free!) Red Cat bus into the centre of town.  Carelessly, almost whistling, did I scoot a left off Beaufort, see this 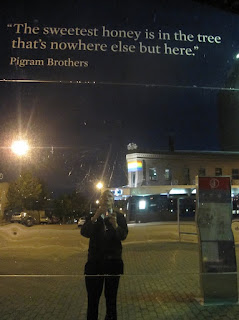 (Nice, eh?) and then with a spring in my step, sashay up to the Western Australian Museum to enter the conference dinner being held there.  The pace is abuzz.  The girl on the door says, where's your green ticket?  Oh, I say, I don't got a green ticket.  Step inside, she says, and get your green ticket from my colleague inside (she doesn't really say 'colleague', I have just forgotten the name she did say.  Shame does that.)  Colleague inside checks my rego and says, well no actually, you were registered for the opening drinks, but not for the dinner. Ah.  Great Yap-sized stone penny drops.  Ah, that's right.  I hadn't registered for the dinner, just for the opening drinks, but by a sort of event dyslexia (tastes like Fruity Lexia) I'd hypnotised myself into believing I'd booked for the dinner as well.  And no wonder. 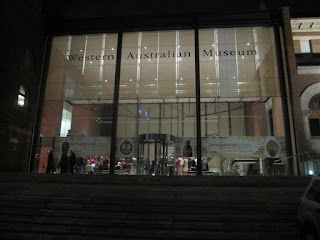 They were having a ball in there. 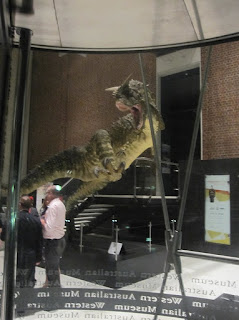 My subconscious jealousy took on physical form, but just for a moment, and became again a meek mouse just before biting this gentleman's happy drinking head off. So just as well.

So off I toddled.  Popped into 'Poppo Korean and Japanese', had a Sapporo and some quite nice tempura. And I gotta say, it's been pretty nice back here.

BUT.  What happened today, Bernard, at the actual conference?

Ah well - the Plenary session (ah, I just looked that up - it means that everyone is there, versus the other sessions where you make a choice and see one session of a bunch that are running concurrently - but not in Cloncurry) featured Andrea Witcomb talking first, about the difficulty of 1) 'dark tourism' -  sites of horror, depravity and terror (ie prisons, Holocaust memorials) and 2) the problems about roleplay at such sites, which aims for identification and empathy on the part of the audience but often 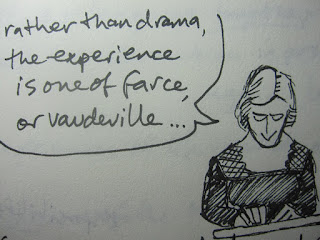 She spoke of the necessity of making sure that if the audience has the opportunity to FEEL, then that they also have the chance to THINK. That aesthetics and information in tandem can produce disquiet, and in that case, our institutions allow the possibility of transformation. Transformation.  Blimey, Andrea, that's what art does.

Susan Cross then gave a rousing mid-game talk to us assembled storytellers: 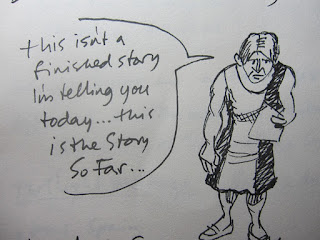 And then we heard from Denis Byrne 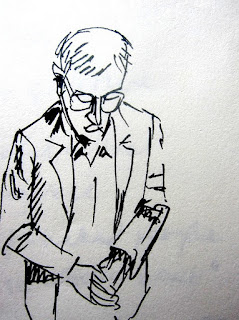 who is an archaeologist from the Office of Environment and Heritage in New South Wales. He had amazing things to say about Bali ('our Spain') and the dehistoricising that we practice when we go there for a holiday on 'paradise island', particularly the invisibility of Suharto's military coup which killed half a million people in anti-communist purges in Indonesia in 1965 and 1966.

He also spoke of the mythologising Walter Spies and of his own mapping of Aboriginal alternative cartographies across colonised spaces in southern coastal New South Wales. Amazing stuff.

Around lunchtime I snuck off to the Art Gallery of Western Australia to use my free ticket to see Princely Treasures: European Masterpieces 1600- 1800 from the Victoria and Albert Museum, which was great and really put me in mind of 'Yiwarra Kuju (One Road)', the Canning Stock Route Aboriginal art exhibition of yesterday, Similarly, as a visitor, you were piecing together people and art and families and dynasties, arranging the information and the art and the stories into a big picture of time and place, which, it just occurs to me know, is probably distance-wise the same sort of size in both exhibitions.

While I was there I thought I'd check out their sequential art, so I was tossed about by Sidney Nolan's epic comic strip Desert Storm and amused by David Hockney's 1960s retelling of Hogarth's A Rake's Progress.  I said hello to some old friends, William Blake's 'Book of Job' etchings and some ukiyo-e prints from the school of Aktagawa.

Back at the conference, I found out about an amazing web resource which is listing ALL theatre productions done in Australia. Yes, that's right.  What an amazing resource, yes?  Yes.  It's AusStage and it's here.  Have a look for that amdram (got that term from John Holden on Tuesday) show you did in the 80s.

Finally, as promised, I saw a session in which my old bud John Ford 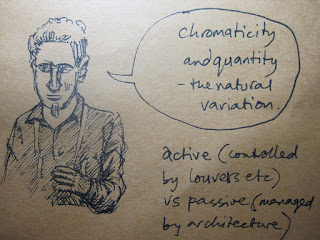 who looks nothing like this, spoke about using daylight to illuminate museum and galleries.  Once upon a time it was the main light source of course, and it went out of fashion for a century or so but now it's back.  Brilliantly, John designed the lighting for the building in which the conference is being held, and these days he works for the great lighting company bluebottle.

And as you know, then I cycled off though the rain to get ready not to go to the conference dinner.  I wonder how it's all going over there.

Well, this means that I can go to bed now and hopefully I can get up early enough tomorrow morning for something of a pilgrimmage.  If this means something to you, then you might know where I'm off to.

Posted by Bernard Caleo at 5:27 AM