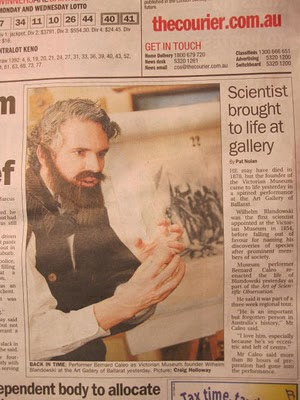 Here is the man.

The man, in this case, being Wilhelm von Blandowski (1822 - 1878, in Australia 1849 - 1859), who I am performing for a program called 'The Art of Scientific Observation'. This program has been developed by Museum Victoria to celebrate The International Year of Biodiversity and National Science Week and is travelling across country Victoria over the next three weeks.

The program has a drawing component, whereby we set out a bunch of drawing materials (pencils, crayons, pens, fineliners) and a whole bunch of museum natural history objects (birds, mammals, reptiles, shells, insects) and visitors can have a go at drawing them. We are at the gallery or art centre in question from 11am to 3pm, and at 11.30am and 1.30pm, I perform a 20 minute illustrated show, 'Wilhelm von Blandowski: a curious man'.

The article above is from Ballarat's 'The Courier', from Tuesday, reporting on the first show of the first day of the tour, at the Art Gallery of Ballarat, on Monday. The article was written by Pat Nolan and the picture taken by Craig Holloway (who made good on his promise NOT to use any of the shots where my moustache was dangling from my upper lip - thanks, Craig!).

One of the great things about visiting the galleries (two so far) has been checking out the exhibitions on display. On Monday I was GUTTED to realise that I had missed an exhibition called 'In Your Face! cartoons about politics and society 1760 - 2010' at the Art Gallery of Ballarat BY ONE DAY.

To console myself I bought the catologue, and what a show I missed! Gillrays! Hogarths! Cruikshanks! Tenniels! Gills! There's a cartoonist in there, Tom Carrington, who does work for the London and then Melbourne Punch, whose work is superb. And there's a bunch of brilliant Australian cartoonists, including Will Dyson, whose 'Anyhow it's cleansing' from 1925 for Melbourne Punch is below. This guy looks a bit like Henry Lawson, no? And his cravat reads 'Labour Party', the implication being that a positive spin must be put on everything. Timely no?

The next picture is by S.T Gill (1818 - 1880), maybe the best known 'goldfields artist', who was also represented in the exhibition (although I don't know if this image was in it - this is from a postcard) 'The Unlucky Digger that Never Returned' has a desolate melancholy which I really like. There's an Eddie Campbell element to this picture. Yes? Yes. 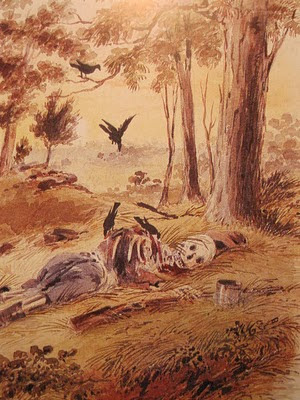 Tuesday was an 'On The Road' day, Ballarat to Mildura, via Horsham, though grey skies and Mallee scrub. 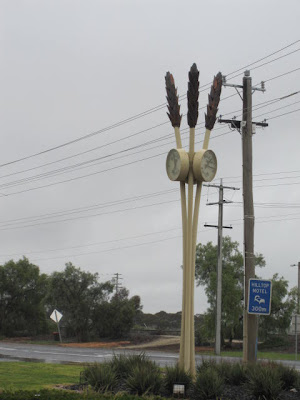 At Ouyen, the Big Sheaf of Wheat. 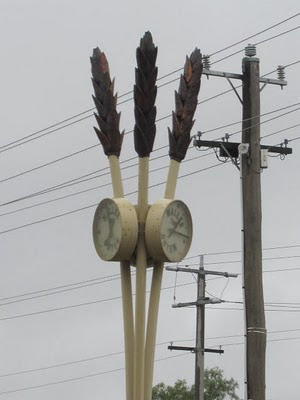 Do three stalks make a sheaf? 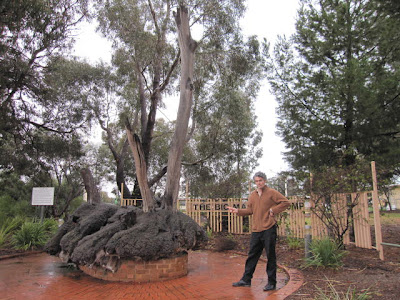 Me and The Big Mallee Root, which is that massive dark thing that looks like poured concrete. Hectare after hectare of these things were ripped out of the ground so that wheat could be planted up here. This picture is for my dad, Salvatore, who is (still) a Mallee Boy. It was taken by Amy Briese, from the museum's Discovery Program, my travelling companion for this week and a lot of fun to be with. The sandwich board outside the cafe in Ouyen when Amy and I had lunch yesterday. Nice cartooning and nice colours, Cowards! 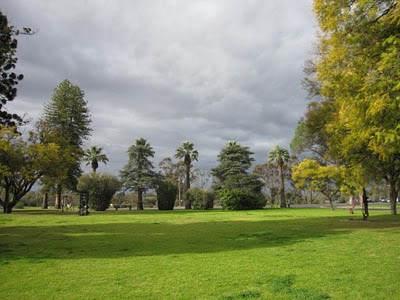 Today, Wednesday, outside the Mildura Art Centre. The skies are all day permanent grey, and the winds are high. Last night there was a tornado in Moama. Are we in Kansas? I don't think so. 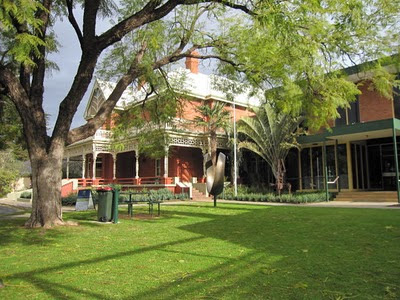 The Chaffey homestead 'Rio Vista', part of the Mildura Arts Centre. We set up in the drawing room, a lovely room, where Gemma and Joe from WIN TV came to shoot the second show of the day - we (Amy, Wilhelm and I) were the post-weather story on tonight's news!

After we packed up, we had a wander around Rio Vista and the galleries. 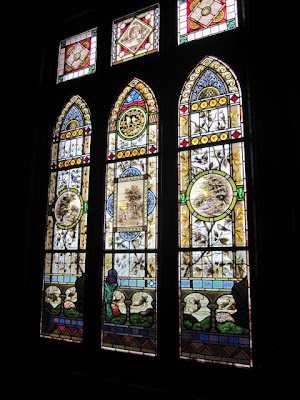 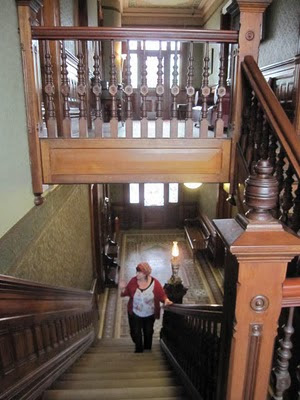 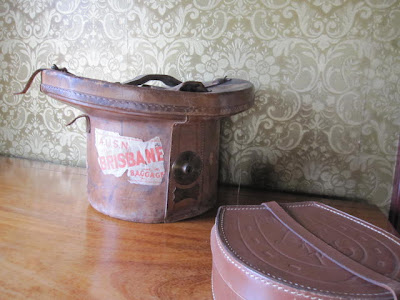 When I have a top hat, I will also have a box for it. 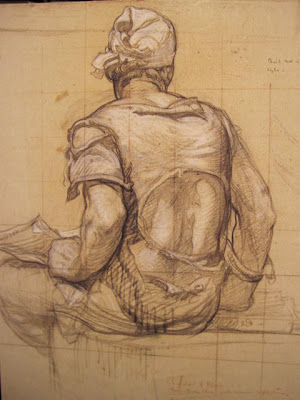 The Mildura Arts Centre has a fine collection of works by Frank Brangwyn (1867 - 1956), including many working drawings and a quite overwhelmingly large picture, a study for a church mural back in England. The scale of the piece and the scale of the room are staggering. 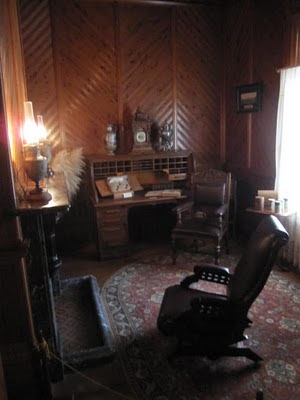 Meanwhile, back in Rio Vista, the wood-lined smoking room. Ah. When I establish my Men's Club, the designer will need to visit Mildura to understand the aesthetic I'm after.

Don't worry, the comics gallery/library/atelier comes first. Once it's up and running, THEN the Men's Club.
Posted by Bernard Caleo at 5:22 AM