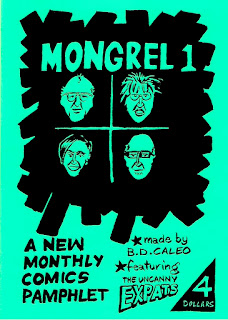 Yes, MONGREL 1, the first number of a twelve issue series of comics pamphlets that I mean to write, draw and publish this year, is now out in the public domain. It's in some shops (to date: Minotaur, All Star Comics and Sticky, all in the city), but mostly? It's in the mail. 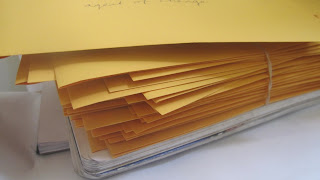 The whole idea with MONGREL is that it be mainly a subscription-based comics reading experience - I'd really prefer you to get it in the mail.  To that end, and to begin with, I have tried a crowd funding model with the pozible mob, which is here and which is active until 23 February 2012.  I'm trying with this to raise a base amount of money which I need to cover print and postage costs for all 12 issues.  If you're reading this after the 23rd of February and are keen to subscribe, go to the MONGREL page of the Cardigan Comics website, which incidentally does have some information about the stories in the book, too. 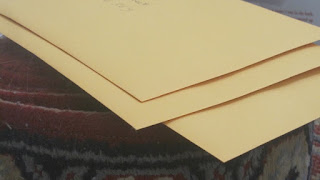 So, monthly huh?  Yes, monthly*.  That's the other idea. And yes, it does mean that work has more than begun on number 2, and I thought I'd leave you with the roughs for the first page, though I have pencilled and lettered (but not inked) that page in the interim.  I'm putting this up as a sort of confession - I'd envisioned it as a fairly sparse page text-wise, but when I got to really work on it, ahh, those words, they just took OFF -- people who have collaborated with me before (Tolley, John Murphy, I'm looking at you) know Bernard the Prolix only too well... 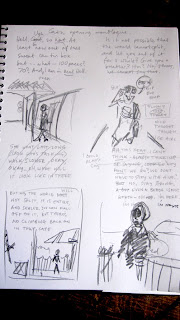 You may not be able to read this, but it's even titled 'Cath's opening monologue'.

So, then, MONGREL: it's verbal, it's theatrical, it's comical.

And I better get back to the old drawing board.  See you soon.

*Kevin Patrick, the knower of things Australian and historical and comicsy, thinks it may be the first Australian monthly comic in 40 years! Let me know if you know different...
Posted by Bernard Caleo at 5:13 AM