But it is so - The Comic Spot, the fortnightly Australian comics hour on radio station 3CR, is coming to an end!  John Retallick: the mover, the shaker, the anchor, the rock, the organiser and motive force behind the show, is moving to Hobart (lucky Hobart!). As John says on the blog, The Comic Spot may well take on another form in the future, but this is the end of Volume One. 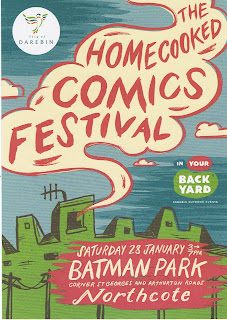 BUT in an amazing coincidence, the last show will be the first one we record in front of an audience! Yes, this Saturday, 28 January 2012 is The Homecooked Comics Festival to be held at (of course) Batman Park in Northcote, at the corner of Separations Street and Saint Georges Road.

The festival, presented by the City of Darebin, features a great line-up of events from 3 - 7pm, and the final Comic Spot 3CR show with your hosts John, Jo and Bernard will be recorded there and go to air next Thursday 2 February at 5pm on 3CR, 855 on your AM dial. The shows get podcast as well, so go to the blog to find an interview with the Australian comics creator of your dreams.

And come along to the Homecooked Comics Festival this Saturday and help us celebrate the great years of the Comic Spot radio show, to meet comics makers, hear comics music, see kamishibai, and make your own comics: it's going to be a grand day!

Good luck, John!
Your fortnightly optimistic show will be greatly missed by this Crew.