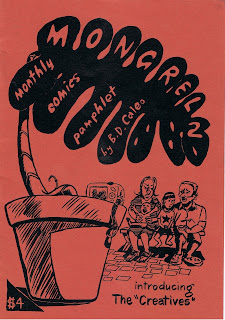 The February number of MONGREL was adorned with a potplant going up from 3 to 2D. 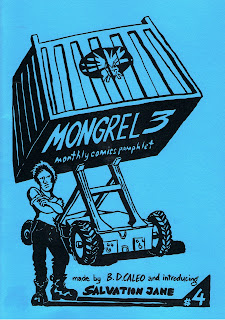 Local subscribers should be receiving their MONGREL 3s today or so, and international subscribers next week. Many grateful thanks to Susan Bamford Caleo for helping out with the last two mailouts.

It is tremendously satisfying making these comics pamphlets, and it's been great working at them in various places - at home in Northcote and Phillip Island, at Pat Grant's in Austinmer (near Wollongong) and researching number 3's locations in Adelaide while I was there in March performing the show Faraday's Candle. I also did a little bit of work on number three up at Chugnut a couple of weeks ago. What all this means is that for me, each of those pages has a certain association with people and spaces

I am currently working on number 4.  The last five pages are pencilled, and with the arrival of a bunch of reference photographs of the mean streets of Soho (thank you Luke Caleo), the pencilling of the first three pages can begin. Every number thus far has become print-ready via the magic hands of Justin Caleo, to whom also thanks.

Below, an earth-bound Port Adelaide tug that didn't make it into the comic, but I include it here as a gift for the dedicatee in number three: 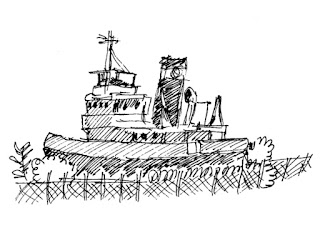 Posted by Bernard Caleo at 7:39 AM