So, last night Monday 27 June 2011, at Readings bookshop in Carlton, we delivered the third show in the category-busting series that IS, 'What It Is?' 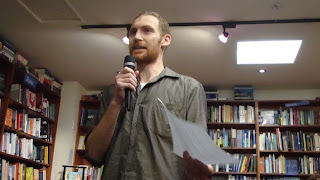 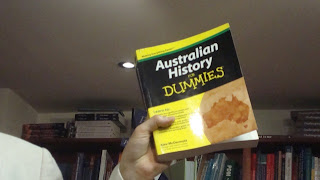 got published recently. So we launched it, there and then, with the three 'Huzzahs' normally reserved for the launch of a comic book (if you'd been there, you'd know why I consider Alex's weighty yet extremely toothsome tome to be an honorary comic book) and then we got into the show, kicking off with a kamishibai about the Australian career of the 19th century natural historian Wilhelm von Blandowski (yes, THAT Wilhelm von Blandowski - the one who I took on a Victorian roadtrip last year - read all about that here) 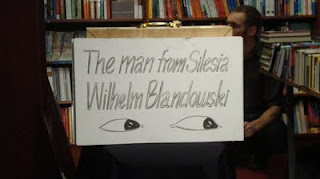 The kamishibai WAS to have been 'narrated' by a song called 'The Curious Man', by calypso artist 'The Death Adder', of Berlin, but various technological barriers meant that the recording could not be played, so I ended up speaking the story.  The song however is magnificent, a sprawling calypso epic of high romance and utter desolation, and I will find a way of posting it. 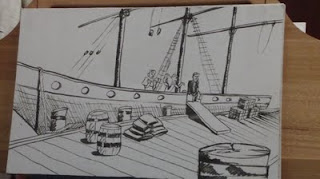 Wilhelm at the Port of Adelaide in 1849. 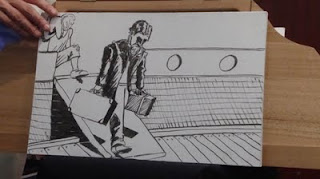 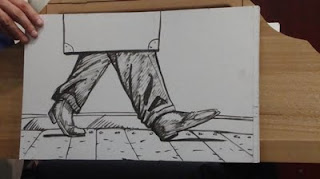 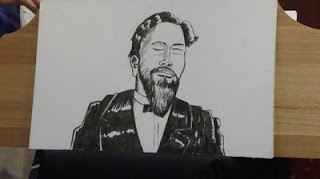 He loves it here. 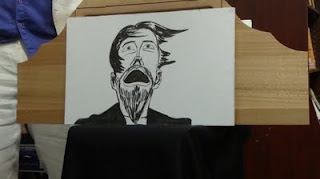 But 7 years later, 200 miles up the Darling River, he has an experience of the sublime.  And from that point, his career in Australia starts to unravel.  Our argument was, he SEES something out there...
Something...
oooooooo000000000000000ooooooooo
We then went onto the story of Redmond Barry, a big statue of whom stands outside of the State Library of Victoria: 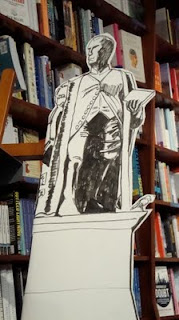 Our proposition was, you can't really understand Redmond (or Melbourne) without the vital piece of information that he was actually a 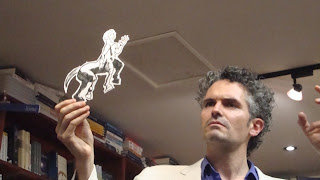 centaur.  And, as a centaur, it is unsurprising that he spends quite a bit of time on his 1839 voyage over from Ireland 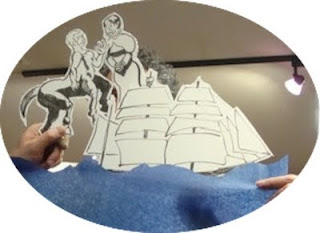 amidships, as it were, with one Mrs Scott, which Mr Scott, and eventually the entirety of the rest of the passengers, finds quite off-putting (thank you to the puppetteering hands of Stephen Mushin (Barry the centaur and Mrs Scott and ocean) and Colleen Burke (boat and ocean).  When they get to Sydney?  He's really frozen out of the social scene there.
Anyway he eventually makes it to Melbourne and makes it in Melbourne and, in the end, makes Melbourne (State Library, Melbourne University, Art Gallery).  Well, you know: 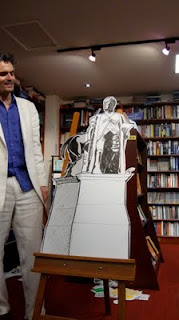 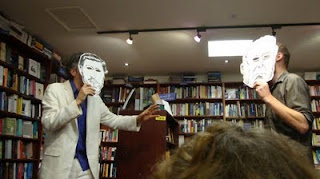 And you too can see it, here.

THE NEXT 'What It Is?' (and final in this series): songster Marin Martini and I will puzzle over, sing about, and draw about, the mysterious and ancient connection between comics and songs.  Monday 25 July. 8pm. Readings Carlton. See you there!

THANK YOU: to Jackie Kerin again for the loan of her kamishibai box, and for all the photos dotting this post.  Soon I will post the youtube episode of last night's 'What it Is?', which, as with the other two, was shot and is presently being edited by the skilful Dan Hayward.
Posted by Bernard Caleo at 6:15 AM

Amazing; I will never be able to see that statue of Barry without thinking of him as a centaur.