Kamishibai, out and indoors 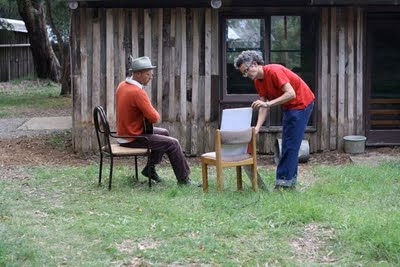 So I've talked a bit about kamishibai, the Japanese art of paper theatre, elsewhere on this blog. Above, the inestimable and highly esteemed Bruce Woolley and I rehearse the story, 'A Very Kamishibai Christmas', which we co-created and first performed in December 2010, and here are getting ready to perform it at Chugnut in March 2011. Chugnut (a weekend away for cartoonists of many stripes) this year, as last, was held at Camp Eureka near Yarra Junction. 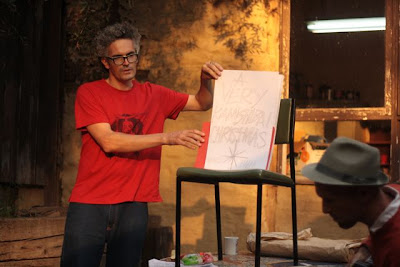 One of the distinctive things about 'A Very Kamishibai Christmas' is that there is no narration or dialogue (well, okay, there's two words - yelled), and so the attention of the performers - and hopefully audience - is even more directed at the rhythm of the reveals of the cards. The music of comics, kids. 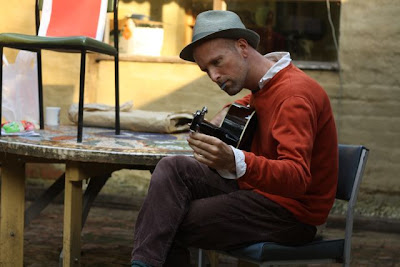 Of course such playing with the kamishibai form wouldn't even occur to me without the fine guitarship, and even finer friendship, of Bruce Woolley.
(Chugnut photos by Anna Brown, whose astonishing gallery of Australian comics volk, paired with their drawn self-portraits, is called Light vs Line.) 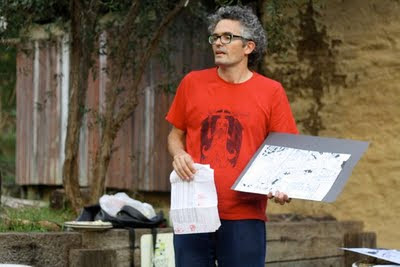 After 'A Very Kamishibai Christmas', I performed the kamishibai produced by Jo Waite ('The White Crow'), Ben Hutchings ('Jupiterian Brain Theatre') and Chris Downes (MR James' 'The Mezzotint') for the 2010 Melbourne Fringe Festival Paper Theatre exhibition. Bernard's t-shirt also by Jo Waite.
A month or so later, on April 11, just before Bruce returned to Berlin by way of Sri Lanka, he and I performed the new epilogue to our 'Miracleman: the two man show' at Fleur's place (thanks Fleur!). This epilogue of course incorporated kamishibai, and attempted to bring the incredibly complex questions of ownership and copyright of 'Miracleman' into our show. Later, from Dohar, Bruce sent me this doctored picture, which I think is an excellent title and image: 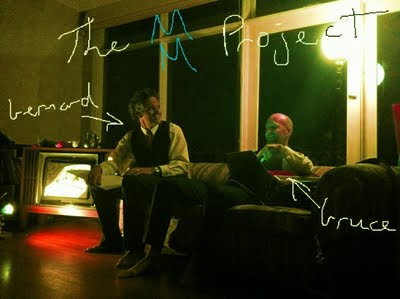 In case you're wondering: yes, Bruce IS playing the iPad piano and piano accordion simultaneously. And for a closer look at what's on the teevee, go here.
Next post: more kamishibai.
Footnote: for Free Comic Book Day 2011, the Chugnutteers, under the expert guidance of Mister Anthony Woodward, have produced an online book chock full of fine work, findable here. For FREE.
Posted by Bernard Caleo at 6:49 AM

Hi Bernard! Hope you're well. It was great seeing your Kamishibai last September - all the best with this one. The cartoonists' weekend away sounds good, would have liked to have been there if I'd known about it. Oh well, I'm off to the Gold Coast for a few days, I'm starting to forget what the sun looks like...

Mr C, I've been getting more interested in kamishibai, and recently found a simple guidebook, by Noriko Matsui, which explains the fundamentals quite well. My question is, will you post one of your performances on Youtube?