What It Is? show #1: Eisenstein and Comics 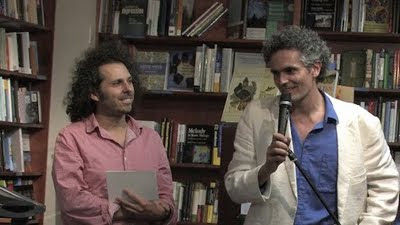 Above, Michael Camilleri and I starting our 'What It Is?' show at Readings bookshop in Carlton on Monday 28 March 2011. It was a show about Sergei Eisenstein, the great Soviet film director, and his approach to montage (a way of editing film, a way of presenting film stories), and the ways that this might apply to comics. 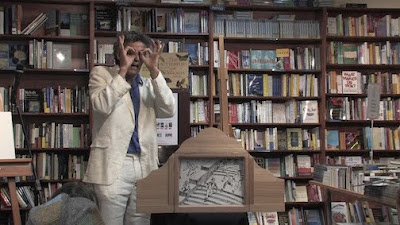 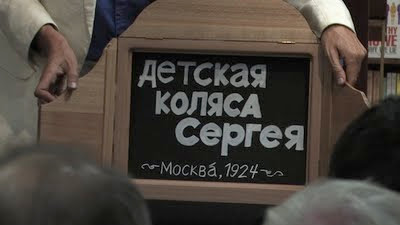 For this, I was lucky enough to borrow this amazing kamishibai box from Jackie Kerin (for the tale of its construction by Ted, go to Jackie's blog entry here). 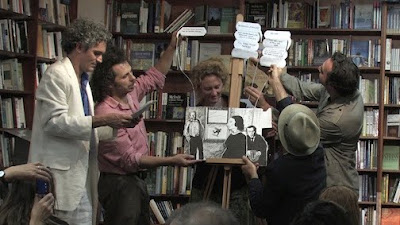 Michael and I also wanted to look at mise-en-scene (another, complementary, sometimes oppositional - thanks, Andre Bazin - way of considering film editing), so we enlisted friends Fleur, Mark and Bruce (in the hat) to help us present a scene from 'Citizen Kane' by Orson Welles. With hilarious results. 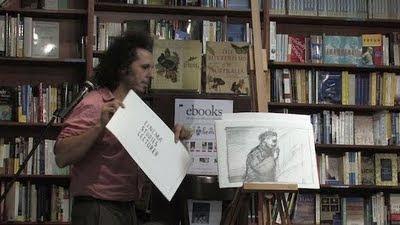 Finally, Michael presented his epic homage to Soviet-style montage, 'The Two Podlokovs' which may be viewed in all its glory on his website, here.
A remarkable night - thanks to Christine Gordon of Readings for asking for a series of nights looking at the art of comic books. Oh yes folks, there's going to be more What It Is...
Also thanks to Dan Hayward of The Video Factory for the photos in this post, and for shooting and editing together a great video of the night, to be found on youtube here. And thanks to Oliver Montagnat for additional camerawork.
NEXT 'What It Is' show: Monday 30 May, 8pm at Readings Carlton - Mike Shuttleworth and I will build Angouleme, city of comics, out of paper, live on stage (with music too!), and then we'll speak to Brenton McKenna, of Broome, about his new graphic novel for kids, Ubby's Underdogs.
What a night it promises to be...
Posted by Bernard Caleo at 1:50 AM