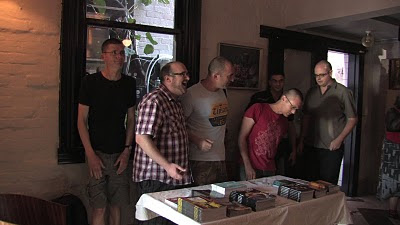 Hello there! I'm going to play catchup for a few posts, as there are notable Melbourne comic book events over the last couple of months that need blooging, and I have some work deadlines breathing down my neck and need to distract myself from them.
Above, from the left, are: Bruce Mutard, Brendan Halyday, Bobby N., Jason Franks, Matt Emery and James Andre. No, not members of the 'Shaved Head and Glasses' League from a long-lost Sherlock Holmes tale, but the 6 comic book author/artists who launched the nine (yes 9, that's right NINE) comics, graphic novels and illustrated books on Saturday 19 February 2011.
To see Bobby N.'s eye-widening poster, and the covers of the books, go to Gary Chaloner's Comics Journal post about the 'Big Arse Comic Book Launch', as it was named. 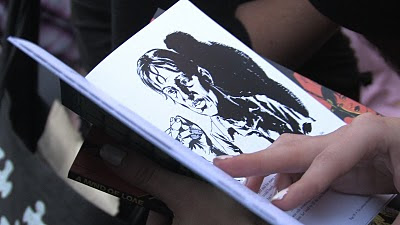 Above: a happy punter (and there were MANY - a big arse night it was) leafing through 'The Loneliness Manifesto', written by James Andre and illustrated by Brendan Halyday.
The other place to read about the launch, and to hear a pre-launch chat between the creators, is the always-reliable Bobby N's blog, here. 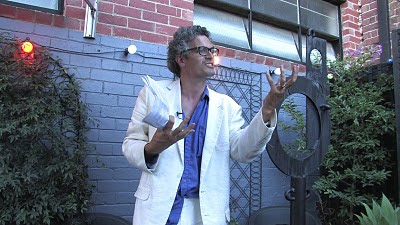 There's me, who had the very happy job of launching this fine clutch (should I really use that word, given the title of the launch? perhaps not) of graphic fiction. As you can imagine, I made much of the 'big arse' metaphor. And I cannot now imagine why not tucking my purple (in Japanese, 'murasaki') shirt seemed such a good idea at the time. But unlike Han Solo, who can 'imagine quite a bit', there's quite a bit I can't imagine. 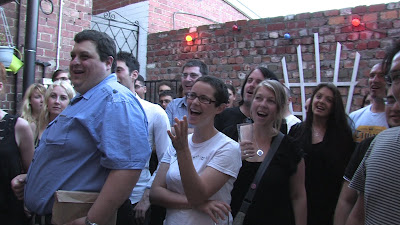 The crowd at Eydies (the bar that my lovely and only sister Anna manages) enjoying my 'Star Wars' references. Nah, not really - that speech, it was all about the comics.
Hey: there in the middle of the shot in the white t-shirt is comic book writer Jen Breach, now an resident of NYC - sob! - we miss you, Jen. Have a good time in that large cider town, but come back, y'hear?
Posted by Bernard Caleo at 10:42 PM