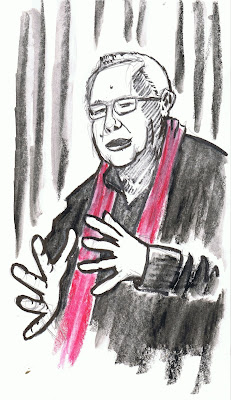 Today in the hot sun at La Mama theatre in Carlton we farewelled a true member of Fitzroyalty, Ralph McLean. I have got to know Ralph over the past couple of years doing comics reviews on 'Yartz', the weekly arts programme that he began in 2000 for the community television station Channel 31. On Saturday afternoons a group of folks would arrive at his bedsit in Little Gore Street in Fitzroy and through a haze of cigarette smoke and snappy dialogue, Ralph would pull together a review and interview show about the arts in Melbourne. 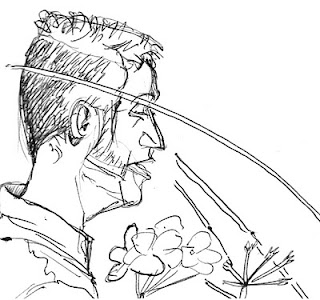 There were some euphonious eulogists today - the service was delivered by Liz Jones, the grand wazoo of La Mama, and above, Francis Italiano, these days of Perth but once upon a time, and for eight years, Ralph's partner, spoke warmly of his time with Ralph. When some people would refer to Francis as Ralph's 'handbag' (ie when Ralph brought him along to shows), Ralph would correct them:
"He's not a handbag. He's a mink stole." 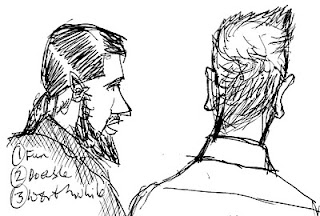 Above, on the left, Misha Adair, who spoke on behalf of the Yartzers, with Ralph's principles of 'making stuff' mysteriously appearing on his pin-striped suit. On the right, Scott Gooding, who had organised an extravaganza of 'Yartz' footage that screened on a monitor inside La Mama, which you could go and see before and after the service. Nice work, Scott.
Hermione Gilchrist also spoke beautifully about Ralph, and has blogged about him, with 'Yartz' footage embedded, here.
After the service and a beer with Mary Anne, who is my mum and one of the 'Yartz' theatre reporters, I cycled off through Fitzroy to community radio station 3CR on Smith Street in Collingwood, where I met John Retallick and Jo Waite and together we went to air with the last 2010 show of The Comic Spot. It was the round-up of the year, which has been a pretty remarkable one for Australian comic books. 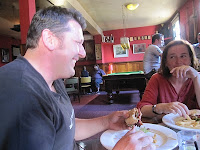 After the show, we repaired to the Union Club Hotel, Ralph's local and the site of his wake, which was still going, where we drank traditional post-show G&Ts and laughed traditional post-show laffs.
Huzzah for community broadcasting, and huzzah for you, Ralph McLean, and all that you gave to the arts in Melbourne.
It was an honour to know you and work with you.
Posted by Bernard Caleo at 3:08 AM