What's next is that I am back in Japan. 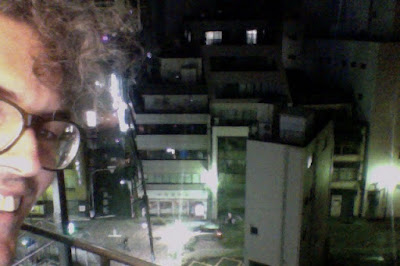 That's the view from the 8th floor of a hotel room in Ueno, Tokyo, taken last Saturday night the 23rd of May, after an izakaya dinner with my Polyglot colleagues, Stef and Dan.

The next day we piled into a charcoal-coloured van with our fellow artists, Aachi Cocchi musicians Izumi-san and Tomoya-san, and the director of Aachi Cocchi, Mikako-san. Our tour manager, Lang Craighill, drove us north up the Tohoku Expressway to the town of Minamisanriku.

Polyglot have visited this town twice before,  the first time only months after it was ravaged by the March 2011 tsunami. This time we are working with residents of temporary housing, and then school children at the Iriya Elementary School, to produce a mega kamishibai which we will perform at Minamisanriku kindergartens next week. Aachi Cocchi (it means 'here and there') have been presenting classical music, opera and dance 'cafe concerts' in places affected by the tsunami since 2011 as well. As part of this two week program, called 'Drawbridge: Kids Are The Boss', Tomoya and Izumi have been playing Tchaichovsky, Rachmaninoff, Chopin, Piazzola and Disney for the residents and the students, and then providing live accompaniment for the kamishibai section. 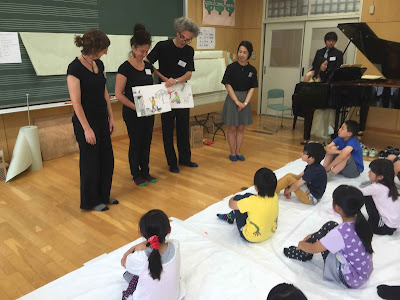 Here's Stef, Dan and I presenting a kamishibai introducing us, which I produced back in Melbourne. It was designed to introduce us and also to be able to performed to the chorus of 'Give Me a Home Among the Gum Trees'. There's Mikako-san translating for us, Izumi-san playing the piano, and Tomoya-san looking on. 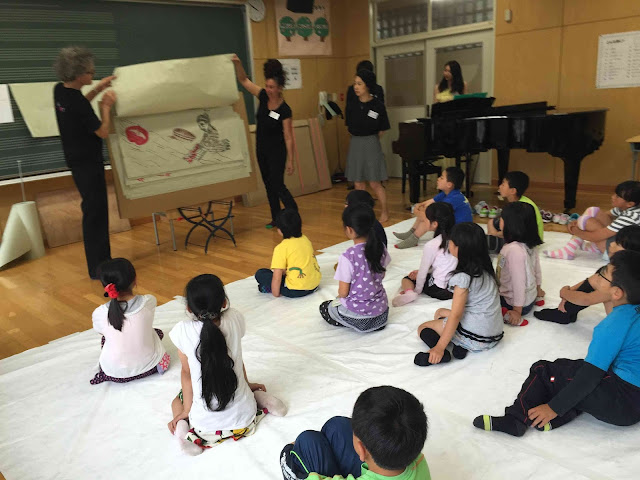 Here's Dan and I showing the Iriya students the story that the temporary housing residents had given to us in the previous two days: the residents told us the story, and I drew the pictures as they narrated it. Although an elderly lady did need to get up and correct my picture of the peach floating down the river towards the lady washing her clothes.  The peach, apparently, didn't have enough of a bum-like curve to it... 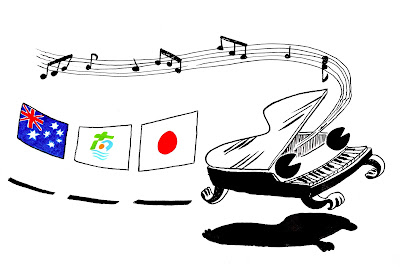 And here's the image I produced back in April so Mikako-san would have a picture to put onto the flyer advertising the cafe concerts for the temporary housing residents. The middle flag is the Minamisanriku flag.