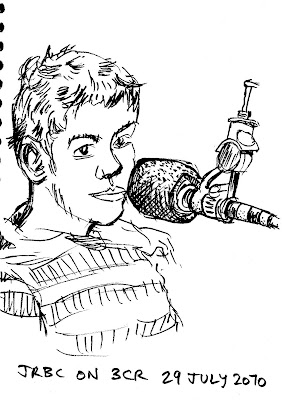 Tonight on TheComicSpot we had a special mystery guest, Joseph Ross Bamford Caleo, in his comics review radio debut - he talked about the Captain Congo series (he's a fan) and even suggested a Kid's Tango -hey lad, not a bad idea at all...

John, Jo and I then talked to Anna Brown about her very interesting 'photographing Australian comics artists' project.

And we spoke with 'El Presidente' of the Australian Cartoonist's Association Jules Faber, who announced the new 'comics' category of their annual Stanley Awards - very exciting! You need to be a member to be eligible, so join up. I am! I think this is a pretty exciting moment - 'single-panel and strip' (ie newspaper) cartoonists are extending a warm hand to 'comic book' cartoonists - let's take it and shake enthusiastically! Also, the next Stanley Awards ceremony is in Melbourne in early November, and those parties are the stuff of legend.

So join the ACA and let's get some great comics mixing it up with some great cartoons.
Posted by Bernard Caleo at 6:02 AM

Thanks for the update. I second the idea for a kids Tango! Perhaps released as a magazine on a yearly basis?

I think that it's a great idea, especially for getting a younger crew involved too. yay!