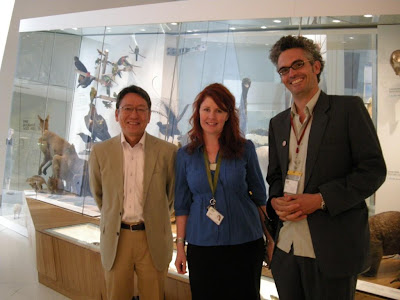 This week just gone, we enjoyed another visit from staff of Tokyo's National Museum of Nature and Science to Melbourne Museum, where I work. Above, with the lyrebird on his shoulder, is Yoshikazu Ogawa, our visitor and Head of the Education Division back home. The lady who the emu is looking at is one of my colleagues, Priscilla Gaff, Program Coordinator of Life Sciences. The bloke whose bum is being nibbled by a wombat is of course me, the humble Programs Ofiicer.

Yoshikazu was following in the footsteps of Koichi Kubo and Koichiro Harada, all of whom have visited Melbourne Museum since I returned from Tokyo in November 2009. He was particularly interested to talk about pre-service and on-going teacher education, which he and Priscilla discussed in detail, but I was particularly interested when he described the sort of presentations that are done for groups of pre-school children visiting the National Museum. Speaking of these, he used a Japanese word which electrified me.

And the word was this:

Really? Did my ears deceive me? Turns out they didn't. (Thanks, ears!) Turns out Yoshikazu really did say, 'Kamishibai'. As in, Manga Kamishibai: the art of Japanese paper theater (sic), as in the book that my mother bought me last week (thanks, Mary Anne!) from the Paperback in Bourke Street. Kamishibai is a Japanese storytelling form where the performer presents a series of painted images, much like the storyboard of the tale, and also makes sound effects and provides character voices and the narration.

Before they began the tale, the storyteller would sell lollies to the kids who'd assembled around the kamishibai 'stage' (sometimes mounted on the back of a bicycle!), then tell the kids that week's instalment of a Golden Bat Adventure, or a thrilling episode of the life of the Prince of Gamma, who hails from Atlantis.

Last century's iteration of this tradition began in the 1920s and continued through to the early 1950s, when television brought it down.

Those of you who know of my enduring love for both performance and comics will be able to guess how much my temples throbbed when I saw those words, 'paper' and 'theatre', used together. Kamishibai, eh? And then, to have Yoshikazu mention the very word not a week later, well frankly, it's hard for me not to detect the ring of destiny in that word.

Watch this space.
Posted by Bernard Caleo at 9:59 PM

as well as my playing music for adults, and having a crack at comics writing as you know, I also play music and read/write/recite stories for children at childcare centres and gov/community functions and the like, so if what you've got brewing in your mind is an educational and entertaining combination of art and storytelling for kids, keep me in mind as someone who'd like to be involved!

Also, are you cool with me pointing people your way if things that are happening seem to suit your thing? (I'm doing some work for some rural councils for literacy month this year, and might be able to push comics into the agenda somewhere).

Bern I believe I have some old Manga Kamishibai on some Japanese DVDs of mine. The DVDs mainly have old animations on them (1920s etc) but pretty sure there is a Manga Kamishibai performance. I just have a feeling it might be a stylised contemporary Manga Kamishibai, though with original pictures. I'll have to double check. Are you in for comics camp? I'll bring them along.