Drawn Out - Congo, Tango and Manga!

On the 'Wireless Comics' front, this morning I was back on 3RRR's weekly arts show 'SmartArts', hosted by the redoubtable (in the 'respected' rather than the 'feared' sense) Richard Watts, with my monthly report from the comic book front, 'Drawn Out'.
CONGO 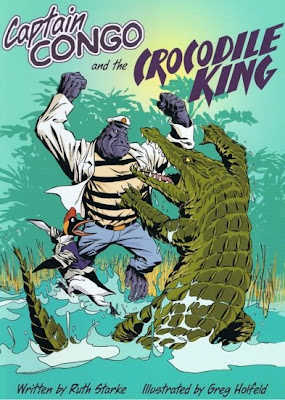 This 46-page, hardback, colour 'book comic' for kids is unique on the part of almost all of the adjectives that I have used to describe it, and its appearance heralds a welcome change in the make-up of the Australian comics world, where most comics are produced for an adult audience. This one is intended "for primary school age," and I'd like to see more comics in Australia produced for young kids.  Props to Working Title Press for publishing this book, which seems to be working for them as they've gone into a second printing and a sequel, 'Captain Congo and the Maharajah's Monkey', is on the way.
The story is classic adventure stuff set in Abyssinia in Africa, where the Captain and his loyal if cynical sidekick, Pug the penguin, must track down the missing archaeologist Professor Parkinson Perky.  My older son Joseph, who at 8 years old is in the bullseye of the target audience, was very excited to see this book at the breakfast table this morning.  He knows it from his school library and loves it "...because of the action and because it's funny."
Artist Greg Holfeld, a Canadian living in South Australia, provides extremely assured graphics - his animal characters are more believable than the humans in the story, which is as it should be.  Ruth Starke the writer comes from a children's book and young adult fiction writing background, and while the characters are well written, with some fascinating backstory clues, she is still on her way to grasp the grammar of writing for comics - it will be very interesting to read the next adventure of the Captain and Pug.  Congratulations to all concerned: our household is hanging out for the Maharajah's Monkey!
TANGO
This was a shout out to let listeners know that I'm on the lookout for comics submissions to 'Tango9: Love and War'.  Deadline: August 31, 2009.  More details here...
MANGA
In order to consider two comics mega-phenomena about which I know little (namely webcomics and manga), I spoke about MegaTokyo, which is both.  (Thanks to Liam Routt for passing on this recommendation)  This sprawling mega-story, delivered in single page installments, published twice-weekly since 2000, is written and drawn by Fred Gallagher. It concerns the exploits of two North American videogamers, Piro and Largo, who travel to Tokyo and get stuck there.  Lotsa big hair, lotsa numbers-for-letters substitution (ie L33T for 'elite'), lotsa SMS-type 'OMG' language, none of which I approve of.  Young people, hmph.  But, with 1220 pages up and counting, and several large story arcs to get your teeth into, this is a dependable web mega-manga to explore.
*****************************************
And that's all I talked about on 'Drawn Out' today (apart from hustling people to go and see 'The Satirical Eye' before it closes on Sunday, see post below).  But last month, as well as reviewing beautiful hardcover books about comics distributed locally by Random House- Underground Classics and The Art of Harvey Kurtzman - I also talked about the locally-produced webcomic (in fact, the  'adventure zomedy comic' - sounds good already, huh?) Sawbones, written by Jen Breach and drawn by Trev Wood.  They've been making this since 2007, and it's the adventures of two loveable zombies, Bones O'Brien and Sheriff Clancy Sawyer.  There are now upward of 130 single-page format strips (in its format it's like MegaTokyo, but Sawbones is in colour.  But it's just once a week.  But it's zombies!) on the site for your reading pleasure.  For a long time the pages have been single-page gag strips, yes, linked up into a story arc, but with a punchline for every page.  Recently, though, Jen and Trev are gunning for more 'longer form' work, with an eye to the flow that the story will eventually deliver when the pages are read together.  Nice going, guys.  The other thing I like about 'Sawbones' is that it's a webcomic, AND you can buy a printed collection or two (I did, and have been drawing Bones and O'Brien ever since with son Joseph) AND it's a blog: you know?  It's a lovely little world, with several ways into it.  Oh yes, I recommend you take a look inside...
Posted by Bernard Caleo at 5:06 AM

Just read teh second Captain Congo album. What a joy! fast, funny and skilfully drawn. Hoping there are more adventures for this unusual pair. The gorilla and the penguin, I mean.