Well it's a pretty fine time to be a gallery-going Melbourne comics flaneur right at the moment - not since the heady days of Osamu Tezuka (Astro Boy and many others) down at the National Gallery of Victoria, and Heroes & Villains (Australian comics) up at the State Library of Victoria, just 6 city blocks apart in late 2006-early 2007, has so much comic booky exhibited goodness been on offer.  Mercy me!
(Quick note: the current show at the NGV, 'The Satirical Eye', is only on until this Sunday 26 July - I talk about it briefly at the bottom of this post - you should really GO TO IT NOW!) 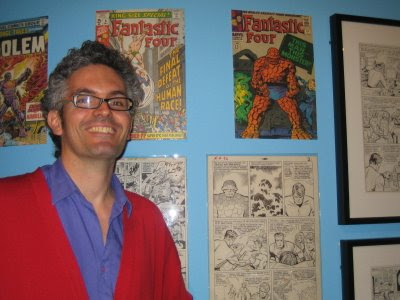 Bernard with art by Jack Kirby: photo by Jess Rynderman
At the Jewish Museum of Australia you can see Superheroes and Schlemiels ('schlemiel' is Yiddish for 'bumbling fool').  This is an exhibition that tracks the the contribution by Jewish creators to the comics canon.  For me, I had known that the Jewish presence in the creation and development of the comic book tradition has been significant (Michael Chabon's novel 'The Amazing Adventures of Kavalier and Clay' and Dave Sim's comic 'Judenhaas' being reference points), but I left this exhibition gaping.  Siegel and Shuster of course created Superman. Simon and Kirby created just about every other superhero.  Then you've got Will Eisner (The Spirit, A Contract with God.  Then there's Harvey Kurtzman (MAD).  Then how's about Art Spiegelman (MAUS).  More?  You'd like more?  Try Joe Kubert, Jules Feiffer, Hugo Pratt for heck's sake. Hugo Pratt!  It's pretty staggering.  And doesn't stop there...
This exhibition originates from Jewish museums in Paris and Amsterdam.  Those museums were loathe to send original art all the way down to the antipodes, and the JMA has had a very talented designer (Michael Battista from Paper Stone Scissors) use the digital image files to create the look of this exhibition, and has been really lucky that local collectors (notably Lazarus Dobelsky) have loaned them original comic art and books from their personal collections.
The JMA must also be congratulated on including a section on Australian Jewish comic book makers: friends David Blumenstein, Nicki Greenberg,  and Andrew Weldon are amongst those represented.
Superheroes and Schlemiels is on until 30 August 2009, and opening times are:
Tuesday, Wednesday and Thursday 10am - 4pm, Sunday 10am - 5pm
Admission is $10 adult, $5 concession, $20 family.
The Jewish Museum of Australia is at 26 Alma Road St Kilda,
a 2 minute walk from tram stop 32 on St Kilda Road.
The Satirical Eye
The other exhibition that you need to see, but hurry because you've only got until this Sunday 26 July, is The Satirical Eye, a free exhibition at the National Gallery of Victoria on St Kilda Road.  This exhibition is curated by Petra Kayser and features stunning work on paper from the Gallery's own collection.
It really surveys an incredibly important time in the development of what I would call 'the language of comics'.  The show features prints, engraving and etchings by great British artists like Hogarth, Rowlandson, Gillray, and Cruikshank which satirise the behaviour of both 'ordinary folk' as well as royalty and politicians.  Then there's a goodly selection of Goya's 'Las Caprichios' and finally quite a lot of work by the very funny Daumier.
So, quickly!  Get to this show and be transported to a time when people used to hire out, not a DVD to watch, but a set of prints to hang in their living room to view for a day.
Posted by Bernard Caleo at 4:20 AM