Last Thursday, June 19, I was on Richard Watts' weekly arts review/discussion program on 3RRR, 'Smartarts'. I've got a spot on the show, once a month, where I get to talk with Richard about local and international comic book and graphic novel news, and this was my second go.

In May we spoke about the current boom in Australian graphic novels: 'The Sacrifice' by Bruce Mutard, 'The Great Gatsby' graphic adaptation by Nicki Greenberg, Mandy Ord's 'Rooftops' and Shaun Tan's 'The Sacrifice'. We also chatted about Alan Moore and Kevin O'Neill's 'The Black Dossier', a comic book from overseas, which I had just begun. This last I wanted to use in juxtaposition to the Australian releases, all of which have strong storytelling at their heart, whereas 'The Black Dossier', in my opinion, was a postmodern exercise. Richard's perceptive, and more generous label was 'metafiction', and having by now completed the book, I would agree with him. However. Having skipped through those current greats of Australian 'book comics', in the first show, my brother Luke's comment later that day was: "Have you left yourself anything to talk about next month?"

Yes indeedy I had. And not only that, after asking for a title for the segment on air at the end of May's show, Richard immediately took a call from listener Robert Glavich who suggested 'Drawn Out'. And even though we got other, very good suggestions, this was the one that took my fancy. In its creation, a comic book is thought out, sometimes written and/or sketched out, but crucially it is... drawn out. Then there's also the sense of duration that that the phrase imparts, again crucial for a time-depicting artform. Finally there's the sense that 'the arrival' (if you will) of Australian comics has been a long time coming. It's been drawn out.

So that's 'Drawn Out', on the third Thursday of every month, at 9.30 am on 3RRR, 102.7 on your FM dial, with Bernard Caleo reporting to Richard Watts.

In the June show, I opened by talking about J. Marc Schmidt's 'Eating Steve', released by SLG Publishing in December 2007. This is a very entertaining zom-rom-com by Schmidt, who has also contributed stories over the years to Tango, the romance comics anthology that I put together. It's a bit smaller than A5, in the format that I'm beginning to think of as (see next post) 'manga size'. Jon is from Sydney, and spends a lot of time overseas in Asia teaching English. His cartooning is beautifully clear, his dialogue well timed and funny, and his characters well observed. And this book is about a cute girl, Jill, who is moved to munch on her boyfriend's grey matter, and the consequences of that. It's not, shall we say, a move forward for the relationship. But it's a great little graphic novella. 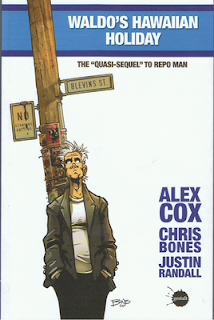 The next book under the comicoscope was 'Waldo's Hawaiian Holiday', written by Alex Cox, the writer/director of cult classic film 'Repo Man'. This book comic is the sequel to that 1984 punk- powered movie. Originally written as a screenplay in 1994 by Cox, it has been in Hollywood purgatory for more than a decade, but in a great move, Perth comic book publishing house Gestalt Comics secured the rights and engaged two local comic bookers to illustrate it - pencils and inks by Chris Bones and colour and textures by Justin Randall. This is a slick, accomplished, full colour publication with great production values, and the story is as incoherent, dreamlike and surreal as I remember the original film being. A great ride.

Other publications we discussed were: 'Word Balloons' the only print magazine discussing Australian comics, put out by Philip Bentley, this issue (number 7) featuring an interview with Nicki ('Great Gatsby') Greenberg; 'Going Down Swinging' the Melbourne poetry/stories/comics anthology, this issue (number 26) featuring comics by Daniel ('The Crumpleton Experiments') Reed and Paul Oslo Davis: and finally from overseas, Charles Burns' incredible work of suburban teenage horror, 'Black Hole', which I borrowed from my local library and I'm glad to be taking back, so excellently disturbing is it.
Posted by Bernard Caleo at 7:08 AM