The Return of Miracleman 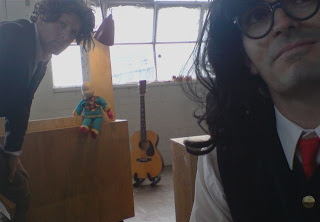 Two men, two wigs, a doll, a guitar... it can only mean one thing. That's right, the stage adaptation of the comic book 'Miracleman' is back in town. Bruce Woolley is fresh from Berlin, and Bernard Caleo is fresh from turning 40, and they're doing a re-vamped, amped-up version of their two man show with more amplitude than ever before!

So much amplitude, in fact, that it's already been blogged quite excellently by Kevin Patrick (with a Miracleman comic book history appended!) here.

Miracleman: the two man show
adapted and performed by Bruce Woolley and Bernard Caleo
from the comic book written by Alan Moore and drawn by Gary Leach and Alan Davis
at The Croft Institute, Croft Alley, Melbourne CBD
(off Paynes Place, off Little Bourke Street, between Exhibition and Russell Streets)

Bernard, it was brilliant!

Now, I know people are inclined to use that word like a swiss army knife these days, but I don't mean it lightly. It's been a while since live theatre has stayed with me for days afterwards. I could feel the AlanMoore-ness of it without having read the comic. The acting and direction was tight and professional. I hope non-comic people still get tingly.

YES! It was brilliant indeed!! Congratulations to both of you - it was funny and moving and exciting and very clever and absolutely engrossing. Talk about drawing viewers into the frames!! Wonderful stuff - I wish you many repeat performances.