No, I haven't converted this blog to a personals column and that title is not a misspelled self-description. Even though I have turned 40 since last posting (the excuse I will use if quizzed about the length of time in between posts), there has been no change to the pallid man-about-town complexion that I have always happily worn.

But there's plenty to report, so let's get cracking:

This evening, I and my family were at Readings in Carlton for the launch of Shaun Tan's new book from Allen & Unwin (one always feels the need to preface those last three words with 'the good folks at'. Because they are.) 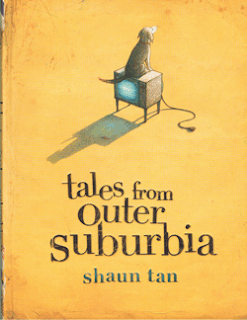 This book is not strictly (or even loosely) 'comics': it is a collection of illustrated stories. But I want to write about it here, in this 'thoughts about comics in Australia' blog, for a couple of reasons:

1 given the success both local and international of 'The Arrival', Shaun Tan has put 'serious comics from Australia' on the global radar. "What Shaun did next" should be of interest to comic bookers. One of the great things about the success of 'The Arrival' is that Tan was not known as a maker of graphic novels/book comics before that point. 'The Arrival' is something of a departure in form, if not in content/theme for him. Primarily he is known as a maker of picture books, although for him this does not mean children's books. As he said tonight, he makes books '... not for children, but I try not to exclude them."

2 'Tales from Outer Suburbia' is another book from Allen & Unwin (those good folk) which continues the story of their commitment to a 'graphic story' line. Again, although TOS is not in itself comics, Shaun Tan's post-'Arrival' reputation means, I reckon, that readers will be seeing/reading the stories with 'comics' lenses in their glasses. And so there's a nice two-way street where Shaun Tan is directing the traffic: in one direction come comics-heads like myself for whom his work stretches and breaks fondly-held definitions of what comics 'are' and 'aren't' - it forces us to recognise family similarities with other forms of illustrated writing. And in the other direction come readers for whom 'The Arrival' introduced a deployment of the frame-by-frame narrative technique in an unfamiliar, deeply affecting way. Shaun blows his whistle *bleeeep!* they get comics, then *bleeep!* I get picture books. Smiles all round, and the road rage meter drops ten points.

Other than Shaun's speech, which he peppered with comments from letters that children have written to him over the years in response to his books, the other great treat of the night was the launch speech, from illustration master Ron Brooks, who looks a bit like this:

Ron had come from Tasmania across Bass Strait (he rowed, apparently) to launch Shaun's book, and I was delighted that he had. Not only did his speech extoll the virtues of Shaun Tan's 27 under par ( I think I have that right) minigolf game. Not only did Ron acknowledge Shaun's poetic skill in both the writing and drawing arenas. But also, after the launch, Ron Brooks signed our family copy of 'The Bunyip of Berkeley's Creek', a book that he illustrated and Jenny Wagner wrote and which was published in 1975 by Penguin Books. I was seven then, and it was the perfect book for me. Still is.

Wrap up: a great privilege to hear two Australian masters of illustration and story talk on the same night. I recommend both 'Tales from Outer Suburbia' and 'The Bunyip of Berkeley's Creek to you all.

Okay, better get some sequential narrative in here or the natives will get restless. Wednesday saw me sidle into 'Classic Comics' in the city and pick up this comic:

Yes, this is Canadian Dave Sim's ongoing comic book après his monsterpiece 'Cerebus', and it's another frankly astounding project. If we can rely on Sim for anything, it is to confound expectation utterly, while not seeming to do so out of wilful perversity. This book is, at face/cover value, a parody of fashion magazines, (One recalls that the 6,000 page, 26 year 'Cerebus' project began as a sword-and-sorcery comics parody) featuring lots and lots of exquisitely rendered pictures of women dressed in haute couture. But really, it seems to me that in 'glamourpuss', Dave's out to explore two interlinked aspects of comics themselves:

Technique Dave Sim has always been interested in the physical culture of making comics, the nibs (Hunt Crowquill), the brushes (sable), the ink (Indian) and the ways that these are deployed to make sequential pictures. Of course every comic artist is interested in this, but Dave's keen on discussing it, in writing about it. In 'Cerebus' this was part of the editorial, but in 'glamourpuss' it's in the text.

Tradition He is upfront about trying to imbibe the styles of the 'photo-realist' newspaper comic strip men of the mid twentieth century - Alex Raymond, Stan Drake, Al Williamson, Neal Adams. As well as drawing the magazine models in the photo-realist style that he has gleaned from these greats, the book also has direct copies of frames from their comic strips that Dave has re- drawn and inked. He has a lot to say about the declining quality of the reproduction of these strips, by which means detail has been lost over the years as they have been reprinted.

Technique and tradition. These two aspects of course are central to any artform. In Australia, what would be the equivalent of 'glamourpuss'? Doing a book in Norman Lindsay's style say, or Phil May's, while discussing how they managed to achieve the very effects that the pictures, re-drawn by the current day author/artist, are illustrating.

'glamourpuss' is a comic book about comics, and at times smells a bit like an exercise - one wonders how long it can be sustained, but as I said at the outset, it's Sim's specialty to second-guess and to wrongfoot his audience. And his wicked sense of humour is still intact.

(above: self-portait of 'evil genius' Dave Sim from 'glamourpuss' #1. Cop those canines!)

Where will he take it? Impossible to say. Will I keep reading it? Affirmative, Mister Sim.
Posted by Bernard Caleo at 6:35 AM

I picked up Tales from Outer Suburbia on brunswick st yesterday, haven't read it all the way through. It looks great, and appealed to me in a way that the Arrival just hasn't been able to, and it's only now that this new one has come out that I have realised how strong this feeling is.
There's a life and energy to Tales/The lost thing that just seems to be absent in the Arrival. Which I suppose is probably part of the point, I suppose I should just go and read it, huh?

Just a correction. Dave didn't use his stock-in-trade hunt-102 nib for Glamourpus, but rather in emulating his heroes - employed their tools. Namely a brush. New for Dave, and he admits 'challenging'.

There's some 'Glamourpus' stuff by Dave on YouTube if you look, where he goes through the exercise of creating a page from the book.

Yeah, I saw those videos a while back, I wouldn't have been suprised if someone had told me it was a parody.
I found watching sim describe the process of leafing through magazines and tracing some pictures like it was an important and/or interesting project baffling.