'The Arrival' at The Arts Centre 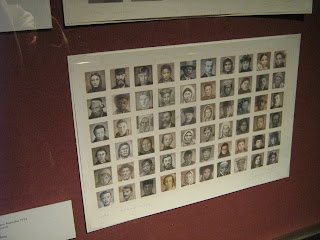 This morning Zebedee my younger son, Mary Anne my mother and I trained it into the city to visit Collected Works Bookshop, where we talked to Kris Hemensley, who runs the shop with his wife Retta. It is always a pleasure to speak with either of them, and Collected Works is one of the reasons that one would live in Melbourne. 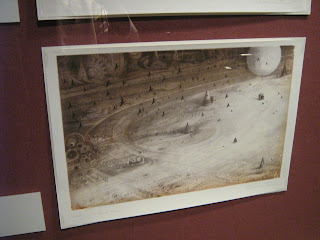 Then we headed south along Swanston Street, passing Young and Jackson's Hotel, Flinders Street Station, and crossed the Yarra Yarra River using Princes Bridge. It was like being in a comic book about Melbourne. Somehow, I'd discovered that there was an exhibition of the artwork from Shaun Tan's mesmerising silent book comic, 'The Arrival', outside The Studio, a small theatre at The Arts Centre. And there it was. 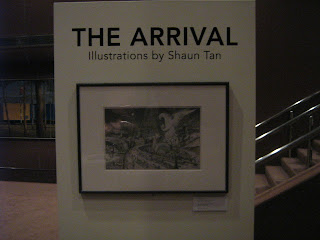 What I hadn't realised was that the theatre show of 'The Arrival', featuring actors, projections, moving sets and puppets, was also on, and we arrived just in time to see hordes of school children march into the Studio to watch it. We didn't have the tickets or the time to see the show, but a very kindly usher turned on the television monitoring system so that we could get an idea of what the show was like. It looked GREAT. And when I find a link to the theatre company who produced it, I will post it here.

(Thank you Scott Wright: name of the company is Spare Parts.)

The exhibition is only on until Sunday May 5 - it features digital prints and original pencil art from 'The Arrival'. Of course, to see the work this way, out of the 'flow' of the narrative, is instructive as I found that I was looking at the pictures as 'finished art', rather than 'ongoing art', a topic which surfaced in the discussion with Mandy Ord on last weeks 'Comic Spot'. (see last post)

Above is the sketch that I made from the monitor displaying the show: that's not 3 characters at the front, by the way, but two shadows from the main character. And there's his creature/pet in the right hand window - in the show it was coloured blue. The audience really was spilling all the way down onto the stage. One of the most amazing things, from my attenuated view, was the use of projections of images from the book, on the three main flats and the ramp, to create all sorts of spaces and scales. The flats were made of screens that could be drawn up, across, down. I loved that.
Posted by Bernard Caleo at 9:38 PM

dear Bernard
I am obviously a meandering fool; I couldnt find this exhibition, tho I wandered all over the Arts centre, and its website today.
JW