So: on the evening of Saturday the 5th of May (World Cartoonists Day, if you don't mind), there was a performance at the State Library of Victoria called 'Read to Me: comic book stories performed live'. That title is pretty descriptive: a quill of cartoonists turned up and read their works out loud to an audience of about 120 breathless punters. 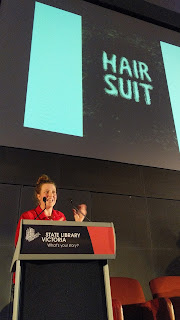 Above, Sarah Firth embarks on the reading out of her hilarious autobiographical story, 'Hair Suit'. 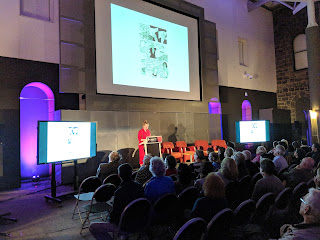 Here you can see that we were reading the stories in the State Library's 'Experimedia' space. Who's 'we', you say?  Well, go to the Read to Me concept originators' site, here, to see the list of comic book readers on the night, and also to see the staggeringly talented Fionn McCabe's portraits of us all. Also, check out when the next 'Read to Me' event is going to take place. And GO! This is the future of comics performance, after all.

Oh, you didn't know that was a thing?

Well, it is. Gabriel Clark and Fionn McCabe say so. 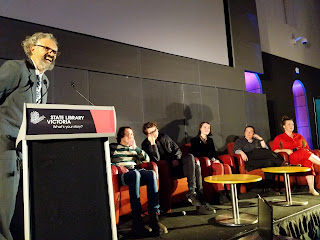 And here we all are: Bernard Caleo, Andrew Weldon, Chris Gooch, Ele Jenkins, Jo Waite, and the aforesaid Sarah Firth. We are q'ing a's at the end-of-night Q & A. After which, we bundled off to the traditional post-comics event feast location, Gaylords, for pappadams, wine, and laffs. 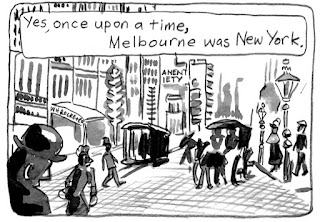 I was pretty darn excited that night, because I read out the public debut of the 'trailer' for The Devil Collects, an graphic novel set in 1880s Melbourne, which shows and tells the  decline and fall of the richest city in the world at that time: Marvellous Melbourne.

The Devil Collects is made by me and historian Alex McDermott.

And, just in case you were wondering...

*'quill': a collective term for cartoonists

All photos taken by Jason Leong: thanks, Jason!

Posted by Bernard Caleo at 5:44 AM