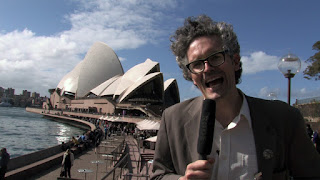 Yes folks, there he be, your intrepid reporter, barking into a microphone while the unlikely geometries of the Sydney Opera house threaten to eat his right ear.  Actually this shot and the rest of the photographs in this post are excerpted from footage taken by Dan Hayward, who with his dad Ian came up and filmed GRAPHIC #2. Of which more anon. 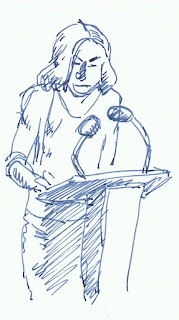 Above, the Marvellous Mandy Ord, doing a live reading of stories from her book 'Sensitive Creatures', from the first session that Susan and I saw at GRAPHIC, 'Oz Comics Show and Tell', and below, Leaping Leigh Rigozzi,

who binned a copy of the Sydney newspaper 'The Sunday Telegraph', the paper which, in publishing an article about R. Crumb as a 'self-confessed sex pervert' or similar, caused that same R. Crumb to decide not to attend.  Arrgh.  Humans.  Sometimes they drive you crazy. 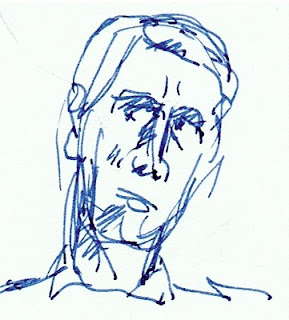 Oslo Davis was also there, speaking about Drawn From Life, the comics newspaper which he edited and which was published as part of this year's Melbourne Writers Festival. And also talking about his own, very funny cartoons. 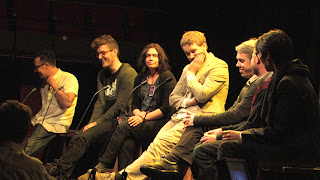 Here are the panelists, who emerged en masse at the end of the session. Prior to this, each of them had done a solo presentation to do with their work. 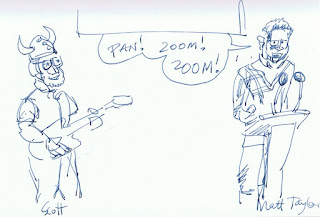 All of them, that is, except the 'two Sydney Matts' - above, Matt Taylor doing a live reading of his recently-launched Lars the Last Viking goes to the End of the World, with live metal guitar playing by his friend Scott Collins, and 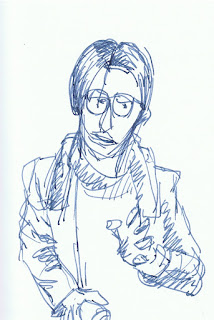 Matt Huynh, who actually wasn't on stage during his piece - a beautiful, continuous horizontal scroll-comic of people rehearsing for a Dragon Festival - which was accompanied by live drumming, and a live dragon! 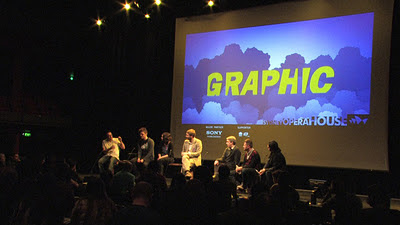 So there they are, folks - from left to right, Gabriel Clark, Pat Grant, Mandy Ord, Leigh Rigozzi, Oslo Davis, Matt Taylor and Matt Huynh.  A truly great start to GRAPHIC 2011.
Posted by Bernard Caleo at 3:28 AM

Is that really true about the Telegraph article Bernard? Unbelievable.
Anyway, it looked like a fun event!