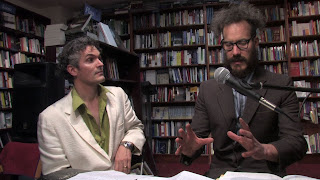 The final 'What It Is?' in this first series was performed/presented at Readings in Carlton on Monday July 2011 at 8pm, and featured me and Martin Martini, as above.  We talked and sang and shew drawings on the theme of 'songs and comics'.

The kick-off kamishibai was titled

and you can watch the whole 8 minute kamishibai here, courtesy of Daniel Hayward (also thanks to Dan for the pictures in this post).

The youtube episode of the whole evening is coming soon.  Watch this space! 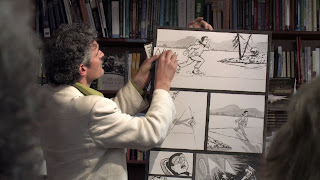 What else did we do?  Well, I adapted a song (Alice by Tom Waits) to comics form (and invented a new artform, 'comicshibai' in the process), and Martin Martini 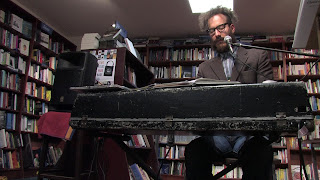 made a song out of a comic ('Douglas and Douglas' from Lumpen #7 by Pat Grant), and then he found out that I was made of comics and I discovered that he was made of songs. 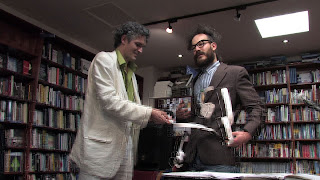 Apparently, we all are.