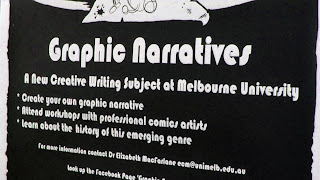 On the evening of Friday 1 July, there was a comics 'swap and sell' - not so unusual you say, except that this one was held at Melbourne University and the comics being swapped and selled were ones made by the students of the inaugural outing of the course 'Graphic Narratives', offered as an honours subject to students in the school of Creative Writing.  The course is the brainchild of Elizabeth MacFarlane, who you can see below proudly talking about the amazing work made by her students. 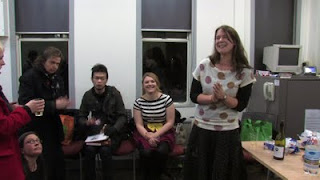 The course looked at the history of the comics form, theory about comics, and, given that it is a creative writing course, the students actually made comic books.  Jam-packed, eh?  There were a bunch of guest lecturers/cartoonists too: Mandy Ord, Bruce Mutard, Nicki Greenberg, Mirranda Burton and Pat Grant.

Of course I couldn't let such a monumental occasion go by without throwing in my two bob: 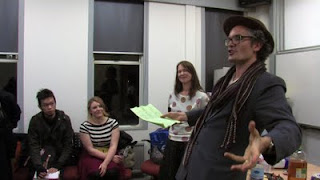 and my two bob was this: the academy has a real place in the development in the comics arts in Australia, if the last week (which had seen the completion by Pat Grant of his magnificent graphic novel BLUE - which you can read in its entirety here - AND the evidence of the piles of books by the students of the Graphic Narratives course) was anything to go by. 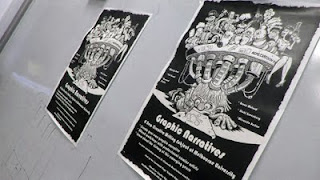 The poster for the course was also by the octopoid Mister Grant, who with a bunch of other Melbourne cartoonists, will be drawing live over the next month down at the National Gallery of Victoria at Federation Square: written NGV information here, excellent little filmette here.

It's called 'Inherent Vice'. Get on down.
Posted by Bernard Caleo at 8:43 AM

Nice article, thanks for the information.