Okay, well, continuing this account of this masterclass at the Wheeler Centre with Dylan Horrocks and a roomful of crackerjack comics construction talent, let me embark upon attempting to describe the action on day three, which is where it started to head into Another Realm, at least for me. 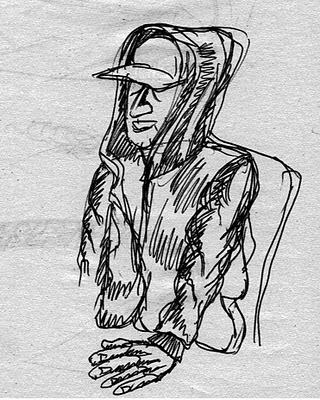 As you can probably divine from the figure above (who it is I don't rightly know, but he sure wears a cap/hoodie combo much like Patrick Grant Esquire, MBE, OBE, PhD), this was a day on which -at least internally- one stood up from the drawing table, glanced down at one's single large hand and thought,
"Heck."
The day's discussion began with Dylan asking us all to answer the following questions:
1. What don't you like about making comics?
2. What don't you like about your own comics?
3. What are you afraid of?
These seem like innocuous enough questions, simple even, and you can imagine having them asked in a workshop which you might do for work (and I mean here labour work, work that you don't love but you do for the money etc) and gritting your teeth and answering them in the most painless and/or entertaining way possible and hanging OUT for the morning tea break.
The difference here was that we were all talking about something that we care about dearly, the difference WAS, I suppose, was that here, there was something at stake. It mattered. And it mattered that we tried to get as close to the truth as we could. In this, Dylan fearlessly led us by answering the questions first.
This process hollowed out a new space in the room, a new space between us. Related aside: I am currently enjoying (very much) reading 'The Otaku Encylopedia' by Patrick W.Galbraith (Kodansha 2009). This evening I came across this Japanese word:
Ma: Empty space and time. Also a literary concept describing places in
a story where the reader must fill in what's missing from the narrative.
This is quite common in ANIME and MANGA.
This is not exactly a description of what was created on Wednesday at the Wheeler, after all we were all answering the questions as best we could, words and thoughts were flying, the room was full of them. BUT. We had moved from a primarily technical discussion on the Monday and Tuesday to a more personal one, describing our struggles with comics. What was under scrutiny was our relationship to comics, and more radically our relationship to OUR comics: what do YOUR comics mean to you? What do they say to you? Looking back at you through the paper as the images form, what do they say?
This is less comics-as-communication and more comics-as-exploration. In the definition of 'ma', above, replace the word 'reader with 'cartoonist'.
Anyway I will try to tease this out a little more in further posts, but let's move onto the afternoon. I had begun the week with the thought that I would use the arvos to re-begin work on my long-abandoned graphic novel, I Knew Him. Early in the week though, I got a request for comics from a literary magazine, and a comic began to form out my doodlings and drawing play: 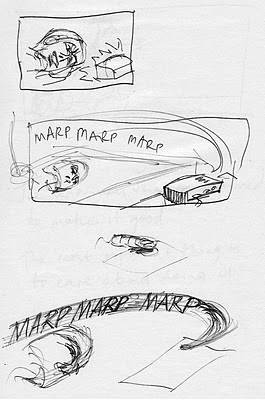 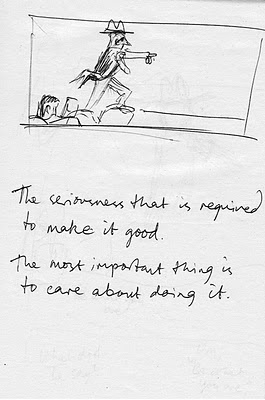 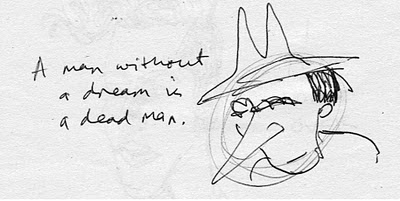 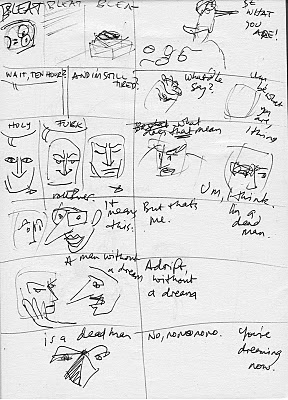 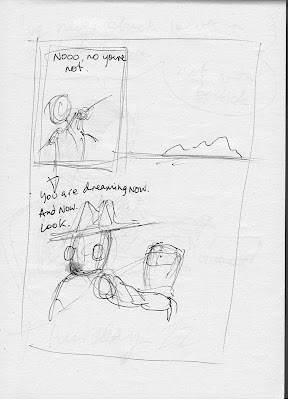 One of the afternoon show and tells was by Michael Camilleri. Now it just so happens that the two folks I have shown doing these, Jo Waite on the Tuesday and Michael today, it just so happens that they were the two people I am most close to, in the room, my closest friends there. And so, with both of them, I was familiar with all of the past work that they presented and showed images of. However, with both of them, I was flabbergasted by the extent and the range of their work, by their dedication and work ethic and high seriousness and gigantic senses of humour about their work. To make this clear - I was struck in this way by everyone's show and tell, but with Jo and Michael, I was wrong-footed by thinking that I knew their body of work. But being shown it it a gigantic volcanic vomit in the space of 20 minutes pretty much blew my mind off, both times.
It is impossible that I know these people. How do they possibly have time for a cup of tea or to share a meal when their surely every minute is concerned with the sculpting of worlds from words and pictures?
The other nice coincidence here is that both Michael and Jo are proponents of the 'biro school' of comics making. The ball point pen that I had rejected as hopelessly low-class, they both wield with ferocity and finesse. And this was the week, in the big chunky 200 page 'Costcutter' A5 Giant Jotter Pad, that I took all my notes and drawings in the wonderful medium of black biro.
And you know what? It's pretty nice to draw with. 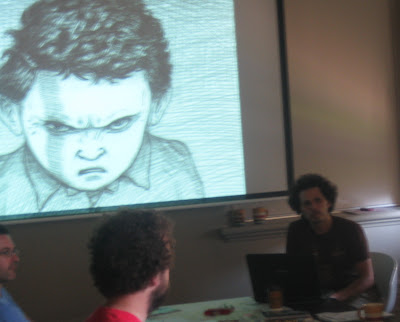 Above, a blurry Michael shows us all, but Tim McEwen and Andrew Fulton in particular, an image from his experimental picture story comic book narrative painting fictional autobiography, 'Catholic Boy'.
NEXT: Here comes the sun.
Posted by Bernard Caleo at 4:54 AM

Great insights into the day Bernard. It is hard to explain how those questions really dug deep into what we are trying to do.

I wish I had more time to produce a whiz bang slide show of my work rather than just passing around books.

I think I have read about MA in connection with zen, emptiness is a quintessential Buddhist concept.

My favourite biro for sketching and even some final artwork is the 'BIC Classic Fine' in black.

Every time one starts to die, I want to make a little origami boat for it, light it, and float it down a river in a traditional Viking burial.