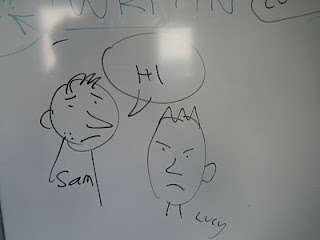 WAITaminnit, that's Sam Zabel, a Dylan Horrocks character, drawn BY Dylan Horrocks on a whiteboard in Melbourne's Wheeler Centre (books, writing, ideas), under the word 'writing'. Just how do these sorts of things come to be? Well, THIS thing started with Liz Argall, an Australian comic book writer currently living in Portland, Oregon in the U.S, (an area apparently swarming with cartoonists) nudging me and saying "Hey, we should get some really great comic book person to come to Australia and give a masterclass. Let's apply for some funding from the Copyright Agency Limited Cultural Fund." And I asked Dylan, and he was keen, so apply we did, and award it they did (thanks CAL!) and on the 19th of April 2010 at 9.30am in the Board Room of the Wheeler Centre, the week-long masterclass began. 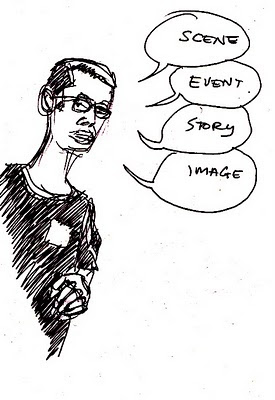 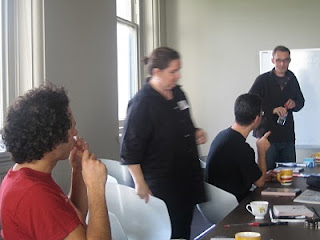 Above, Michael Camilleri (always focussed), Jo Waite on the move, the back of the well-groomed Tim McEwen's head, and Dylan Horrocks.
On that first morning we all gave a sort of a run-down, you know, 'my life in comics' sort of thing. Dylan went first, told us about his comic 'Pickle' that came out in the 90s, his graphic novel 'Hicksville' that came out of that series, and how the subsequent experience working as a comic book writer for DC Comics almost totally squished any love for comics out of him.
Luckily though, he stopped writing for DC and, as he said 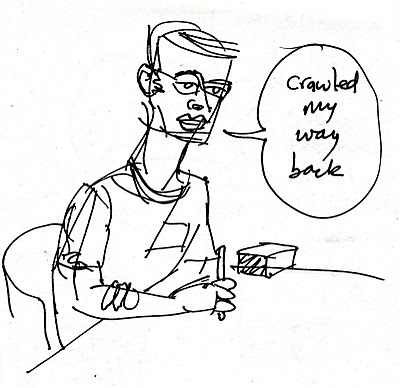 to making his own comics.
Phew. We all shared stories, then got onto talking about the ways that comics stories and comics worlds get built, imagined, drawn, and actually probably LAST of all get written. Pretty interesting stuff. 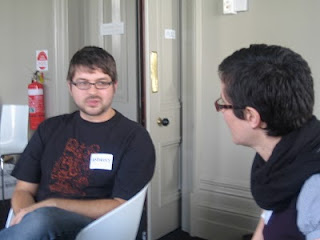 Above, Anthony Woodward talks about comics writing with Jen Breach, a comics writer who joined us just for that Monday morning.
Below, Michael Camilleri shares some advice once given to him by a Russian actress. 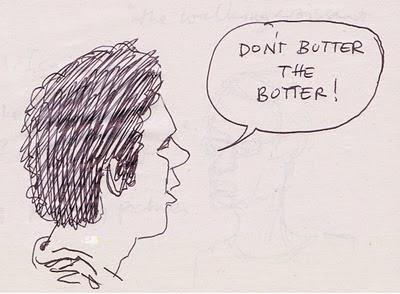 Very sage.
NEXT: Tuesday - drawing!
Posted by Bernard Caleo at 5:12 AM