The Double Tango launch at Dante's!

Yes, it finally happened, my friends.
Two Tangos were launched last Thursday night at Dante's Emporium in Fitzroy. The photos in this entry are by my son Joseph (and darn fine ones they are too). For another look at the launch, including a very impressive panorama, go to Bobby. N's blog, here. 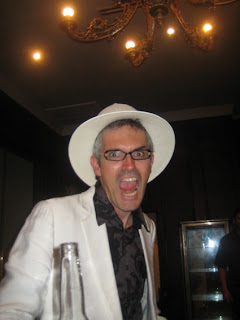 Above: the editor of both books, and publisher of one of them, at the beginning of the night, in a festive mood. 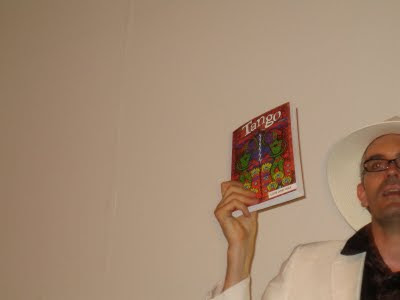 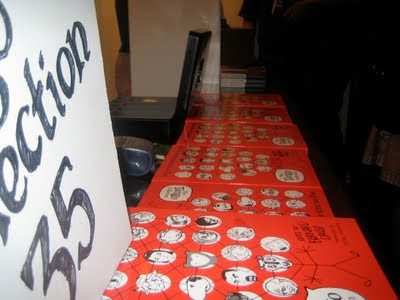 THE OTHER TANGO
Andrew and Sean (unpictured, but to the left of the piles of books), from Readings bookshop in Carlton, were there vending 'The Tango Collection', a lovely thing because it was at that very shop that Erica Wagner, the publisher at Allen and Unwin, first suggested the idea of the collection, 18 months ago. Thank you, Erica. And thanks to Jenny Nestor for lettering the signs for the selling of the books, there and then at the start of the launch. And thanks to Adrienne Leith for her reprising her award-winnning role as the 'Tango carnie', selling 'Tango9: Love and War' to punters and handing out authors' copies to the contributors. 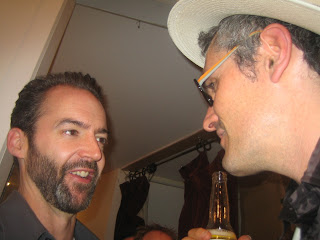 ONE JOHN
John Murphy, a contributor to both books and a great friend, the curtains to the back room, and the neck of a bottle of Corona. 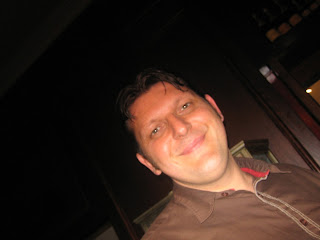 THE OTHER JOHN
John Retallick, a great friend, comic book correpondent, and anchorman of TheComicSpot, organiser of Comic Camp, and cynosure of many other Melbourne comic book events, who came along early to help set up, then left to interview out-of-towners Chris Downes and J.Marc Schmidt (both in town for the launch), then came back in time to help me through a crisis later in the night. Thank you, John.
Also: John came over to our place the other night and recorded a web-only ComicSpot special, a 'full and frank' interview with Susan and I about the joys and challenges of getting two Tangos out this year. If you can handle the truth, it's here. 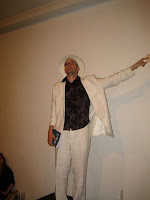 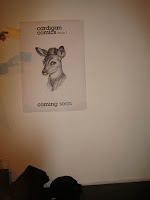 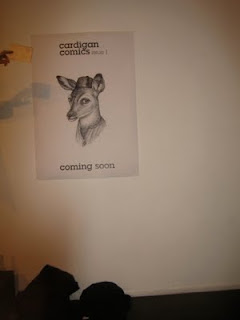 Above, the hoo hah in full flight. By this point, I had informed the gathering that 'The Tango Collection' is not a comic book but is, in fact, a walk through a beautiful and time-drenched city. And I'd let them in on the secret that 'Tango9: Love and War' is not a comic book, but is, instead, a postcard from a POW camp to a far-flung and beloved reader.
Both books, in short, are vessels of romance. 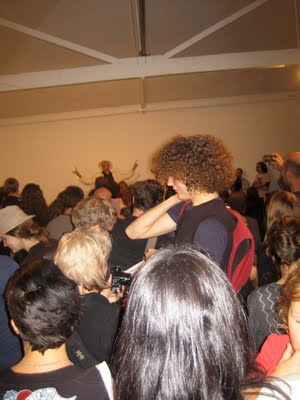 Above, a section of the gathering. Most obviously Bruno Herfst, the designer of 'The Tango Collection'. To his left, Jodie Webster (editor of the graphic novels 'The Great Gatsby' by Nicki Greenberg (yes, she was there, with 4-month-old Poppy) and 'The Sacrifice' by Bruce Mutard (there too), all from from Allen and Unwin), and to his right, Elise Jones, my fellow editor of 'The Cardigan Collection'. Thanks Bruno and Elise, it was a real pleasure making the book with you. 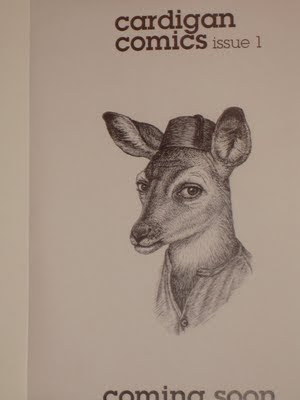 The simply staggering image by Michael Camilleri announcing my next project, called (at this point) 'Cardigan Comics'. It will be a magazine. It will feature comics and words-only text. That's what we know. Keep an eye out for it.
Finally, thank you to all of the contributors to Tangos thus far, and particularly 'The Tango Collection' and 'Tango9: Love and War'. You have made the work that makes the making of Tango worthwhile. Important, even. Yeah, important. We're building a comics culture, here. And it's a pretty fine one. Congratulations.
And finally finally, thanks: to all of the very many people for coming along to the launch; to Scott Matthews and Luke Caleo for wrangling files for Tango9; to Justin Caleo for his huge effort on designing the book; to Peter Ra for taking up the 'cover designer' reins from Anita Bacic (she was there! from Istanbul!); to Mary Anne for the hat, and a massive, MASSIVE debt of gratitude is due to Zebedee and Joseph and most of all Susan, for the time and the space and the love and support that I needed to make these books. I love you, my family.
Posted by Bernard Caleo at 6:13 PM

It was a terrific evening, I was very glad to be there.

Sorry I couldn't be there. Can't wait to see it!

A great night. It was the high watermark I was expecting. John's podcast at your home was nice too.

Congrats Bernard, and all those involved.

It was very sexy.There were alot of attractive people there....
Neale B

An enjoyable night and so many comic creators in the one room! It almost goes without saying how great "The Tango Collection" is, but "Tango9: Love & War" is a stunning volume, full of amazing material, and a worthy companion indeed!

My wife could scarcely believe me when I told her I was in a room full of people who take comics even more seriously than I do.

It was a fantastic night, a life changing one, even.

Thanks so much Bernard and all.

How can I get my hands on a print of the Cardigan Comics Eye-Deer picture? The thing has haunted me ever since seeing it and I must have it on my wall. Is Mr Camilleri open to selling prints of it?

sad to not be there, but i hope my love for this fabulous collection spanned the kilometres between me and you guys.

cos i love youse guys.

Hey love the new ideer. Beautiful image Michael.. you wunderkind! Wow for those of us who miss deadlines it means we can contribute throughout the year.

Lots of love from the Land of Smiles
Colle
xxxxxxx