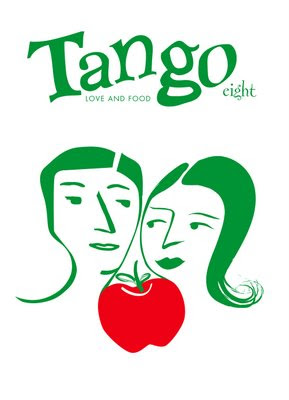 Well well well: last night, Wednesday 17 December 2008, in a packed bar upon Lygon Street in East Brunswick ('Mr Wilkinson', 295 Brunswick Street to be precise), we launched the most recent issue of the Giant Australian Romance Comics Anthology.
Tango8: Love and Food
A goodly bunch of the 70 contributors were there, and as usual at a launch I met quite a few of them face to face for the first time (Simon Barnard, Brendan Halyday, Richard Butler, fine comic book makers all).  Much champagne was drunk, a bit of speechifying was done (thank you to Dur-e Dara, who officially launched the book) and a sense of joy and celebration filled the bar, as did we.
So now the book is out, and well and truly launched: you can grab a copy from our Melbourne stockists, listed on our website, or indeed direct from the site.
Thank you particularly to the following people, who I didn't credit in my speech as I should've: Adrienne Leith and John Retallick, super vendors of 144 copies of Tango8; Mary Anne and Salvatore Caleo for my new white suit (pictures to follow), and most of all, with great love, to Susan Bamford Caleo for making the making of the book possible in so many little and large ways.
Posted by Bernard Caleo at 5:01 AM

A great launch Bernard. The most enjoyable I've been to yet!

All the best for TANGO's success into the future... HUZZAH!

Thanks, Bernard, my copies have just arrived in the mail (sorry I missed the launch).

I love the cover! A beautiful book packed with eclectic, fascinating Australian tales as usual - Tango is the best.

I have a picture of you in your magnificent suit! To come forthwith...well, thereabouts.

So many great big fat smiles - what a launch! And what an incredible comic anthology. Thank you Bernst!

It is a strange and beautiful thing.

Thank you so much for sending me one, it was the perfect antidote to...that other stuff.