Ugly, Drunk and Stupid? Us too! 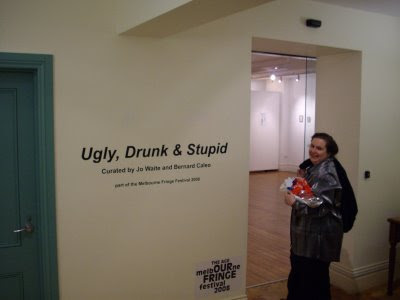 Hey!  Who's that arriving this evening at the launch of the exhibition 'Ugly, Drunk and Stupid', part of the 2008 Melbourne Fringe Festival?
Why, it's none other than Jo Waite, the actual curator of the exhibition, photographed by Bernard Caleo, the virtual curator.
(Not an hour later, a real ugly, drunk and/or stupid person will sway up to the gallery, smash into one of the windows and then weave away into the night...)
The exhibition features grotesque portraits and comic strips by Melbourne comic book makers: Andrew Weldon, Jo Waite, Michael P Fikaris, David Blumenstein, Kirrily Schell, Neale Blanden, Mandy Ord, Tim Molloy, Bernard Caleo, Sarah Howell and Tolley.
It's on at the Town Hall Gallery at the Hawthorn Town Hall and runs until Sunday 5 October.  On Saturday 4 October there will be a talk at 2pm about the 'ugly' tradition in comic book art and then from 3pm there will be an 'ugly draw-off', a comic jam at which you can draw an ugly mug onto a beer coaster.
Just as you've always wanted to.
Posted by Bernard Caleo at 7:39 AM